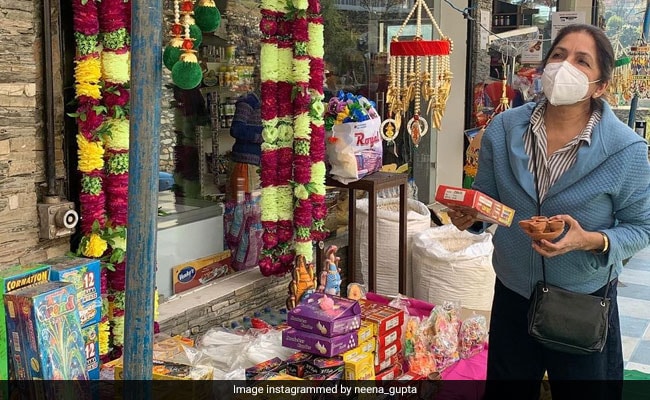 Neena Gupta, who has been staying in Mukteshwar (Uttarakhand) since a few months, will be celebrating Diwali there. On Friday, the actress shared a glimpse of what her pre-Diwali scene looks like. Neena Gupta posted a picture of herself from a local market in Bhatelia. Dressed in a casual outfit, Neena Gupta can be seen wearing a face mask as she explores the market. The Mandi actress captioned her post: “Local Diwali shopping at Bhatelia, Mukteshwar.” In the comments section of her post, fans wished her Happy Diwali and filled up the post with heart emojis.

While Neena Gupta will be celebrating Diwali in the hills, her daughter and designer Masaba Gupta has been actively sharing pictures from her vacation in Maldives. Take a look at her post:

The mother-daughter duo recently featured in the web-series Masaba Masaba, which released on streaming giant Netflix. The semi-fictionalised show is inspired by the lives of Masaba Gupta and her actress-mother Neena Gupta. It has been directed by Sonam Nair and has been produced by Ashvini Yardi.

Masaba Gupta is the daughter of Neena Gupta and former West Indies cricketer Vivian Richards. She made her TV debut with the reality show MTV Supermodel Of The Year, where she featured as one of the judges.