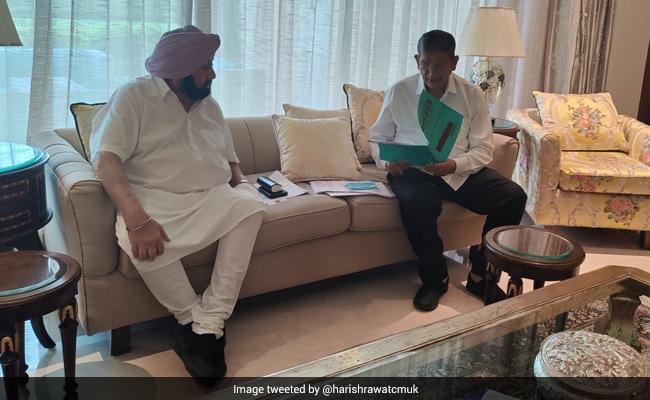 Harish Rawat is in-charge of the party’s Punjab affairs at the AICC.

He also told reporters that power purchase rates with private power companies should be renegotiated and the benefit of reduced prices should be passed on to consumers.

Mr Rawat, the in-charge of the party’s Punjab affairs at the AICC, had arrived in Chandigarh on Tuesday amid an ongoing tussle between the camps of Amarinder Singh and Mr Sidhu.

Mr Rawat on Wednesday met the CM at his residence in Mohali’s Siswan. The meeting, in which the advocate general and the DGP were also present, lasted for about three hours.

After the meeting, Mr Rawat said he told the CM that the state government should provide some relief to power consumers.

“I am hoping that the Punjab government will soon give some relief to general category power consumers,” he said, pointing out that at present, up to 200 units of free power was being given to SC and other categories.

“I requested the CM and said the AICC also wants it. At present, we are in the government and we should provide some relief to power consumers,” he said, adding that how much relief was to be given will be decided after the CM consulted with his ministers.

While referring to power purchase agreements, Mr Rawat said that the government will take every possible measure to provide power to people at lower rates.

He blamed the previous SAD-BJP regime for “imposing” the “faulty” PPAs on the people of the state.

“I said that the companies must be clearly told that they should come and renegotiate the rates,” said Mr Rawat.

Mr Rawat also took an update from Amarinder Singh on the progress on an 18-point programme given by the party high command.

On the issue of action in the 2015 sacrilege incidents, Mr Rawat said it was “highly sensitive”, adding that he urged the CM to take legally possible action in the matter.

However, he said that the government has already initiated a “lot of action” in it.

He said he requested the CM to again meet the governor and take appropriate steps to create pressure and assure farmers that the state government was with them.

Referring to the bus permit issue, Mr Rawat said he informed him that he will get all the pros and cons and legal angles examined and then a suitable action will be taken.

On Mr Sidhu’s demand to extend the upcoming one-day session of the Punjab Vidhan Sabha to cancel power purchase pacts, Mr Rawat said it is the CM who will discuss what is to be done in the assembly.