Klara And The Sun

About halfway through Kazuo Ishiguro’s new novel, which is set in the near future, I happened to tune in to the radio news.

‘People will soon be allowed to meet one other person outside,’ announced the newscaster.

Had I heard such a thing 12 months ago, I would have automatically assumed I was listening to a bit of science fiction. But nowadays the world of science fiction seems commonplace, perhaps even slightly old-fashioned. 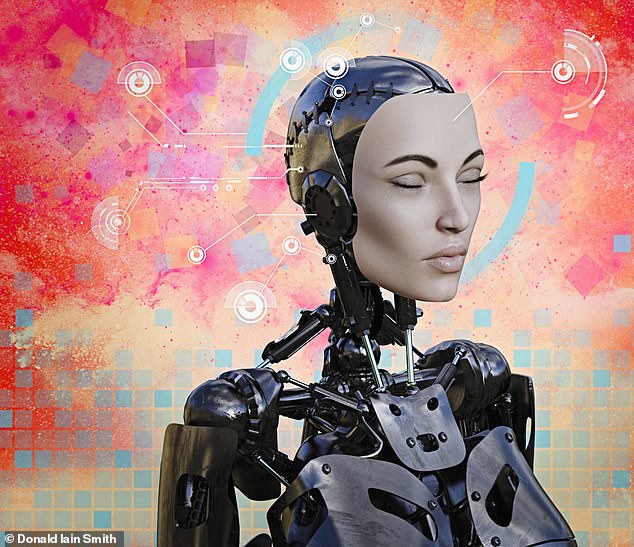 Klara’s language is flat, basic, pedantic and ever-so-slightly peculiar. This is true of all Kazuo Ishiguro’s narrators (a female cyborg, above)

Again, in his entertaining new book about dogs, which I reviewed a few weeks ago, Simon Garfield told the story of Barbra Streisand and her pet dog, Sammie, a Coton de Tulear.

Though Sammie died some time ago, in a sense she lives on, as Ms Streisand paid to have her cloned in a laboratory in Texas called ViaGen Pets (‘America’s Pet Cloning Experts’).

‘It was easier to let Sammie go if I knew I could keep some part of her alive,’ she explained to readers of the New York Times. 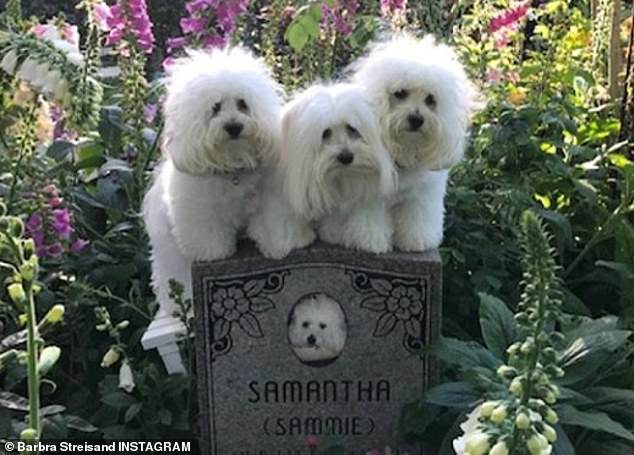 Twins Violet and Scarlet, (above, with cousin Fanny), honouring Barbra Streisand’s dog Sammie, from whom they were cloned

Klara And The Sun was written before the emergence of coronavirus. This means that though it is largely concerned with a brave new world of robots and artificial intelligence, it still has a rather creaky, reassuring, old-fashioned feel to it, like a work of science fiction from the 1950s.

It begins in a department store (remember them?) on the main street of an unnamed American city. ‘When we were new, Rosa and I were mid-store, on the magazines table side, and could see through more than half of the window,’ runs the first sentence.

It soon emerges that the narrator is a robot called Klara, who looks and sounds almost exactly like a human being.

Klara’s language is flat, basic, pedantic and ever-so-slightly peculiar. This is true of all Ishiguro’s narrators, regardless of whether they are set in the future or the past. Ishiguro’s novels are all composed in what could be described as instruction manual prose.

His narrators tend to be plodding, colourless types, struggling to adapt to a world in which they feel out-of-kilter.

The first line of his most famous novel, The Remains Of The Day, narrated by the starchy butler, Stevens, goes: ‘It seems increasingly likely that I really will undertake the expedition that has been preoccupying my imagination now for some days.’

Klara and Stevens have a lot in common.

In fact, for all its sci-fi setting, Klara And The Sun carries many echoes of The Remains Of The Day, which itself carried many echoes of its beautiful predecessor, An Artist Of The Floating World.

All three are narrated by a devoted servant, who puts all his or her energy into becoming the type of human being most pleasing to their master.

Stevens, the butler in The Remains Of The Day, is forever struggling to learn to ‘banter’ like everybody else. He even prepares little items of banter, ‘conversation of a light-hearted, humorous sort’, before taking his master his afternoon tea.

Stevens is a sort of lonely replicant, out of touch with human emotions. On the very last page of the book, he is still wondering ‘if it is the case that in bantering lies the key to human warmth’.

Klara, the robot, is similarly devoted to learning whatever it takes to make her eventual owner happy. Standing in the window of the department store, she looks out on the street, carefully observing the peculiar ways of all the passing humans.

She also notices other robots – called AFs, or Artificial Friends – avoiding her glances. She wonders why they behave so oddly towards her, but later thinks: ‘They were afraid because we were new models, and they feared that before long their children would decide it was time to have them thrown away, to be replaced by AFs like us.’

A teenage girl called Josie, on a shopping trip with her mother, catches sight of Klara, and likes what she sees. Josie describes Klara as ‘really cute, and really smart… short hair, quite dark… and she had the kindest eyes and she was so smart’.

Ford has harnessed robotic technology to simulate the effect of a heavy man sitting on its car seats. The name of this machine? Robutt.

When Josie is elsewhere, her mother puts Klara through a swift audition: can she replicate Josie’s voice, and Josie’s walk? Klara has been created to remember everything she sees, so she passes the audition with flying colours.

Just as Klara must devote a lot of energy to learning about humans, so the reader of Klara And The Sun has to put a good deal of effort into understanding the whys and wherefores of Ishiguro’s strange new world.

Like the world of his 2005 novel, Never Let Me Go, it is an odd mix of the familiar and the peculiar, the old and the new. People still drive cars, and lorries still cause pollution.

At home and in the street, people are still hooked on smartphones, though they are here called ‘oblongs’.

Yet Ishiguro’s created world is also packed with new practices and expressions that the reader has to comprehend as though through thick fog. It is quite some time, for instance, before you discover that AF stands for Artificial Friend, and other aspects of everyday life remain puzzling for much longer.

What is the RPO Building? Why is Klara so obsessed by the Sun, and why does she speak to it as though it can hear? What is meant by one teenager being ‘lifted’ and another being ‘not lifted’?

I’d guess that science fiction buffs would be well-equipped to work out what’s what, and would take pleasure in puzzling it all out, but throughout the book I found myself fretting that I was missing something essential, or worrying that I still wasn’t sure what on earth this or that character was on about.

By the end, I felt that some of these puzzles were needlessly obscure, and might have been explained in simple language much earlier on. It all means that the novel is a lot more heavy-going than it need be.

Like many films and books involving robots – from Ian McEwan’s recent Machines Like Me to films such as A.I.: Artificial Intelligence, Ex Machina and Blade Runner – at its heart lies the ancient question of whether humans have souls.

Is there, in other words, something at the heart of being human that makes each of us absolutely individual? Or are we all simply a collection of atoms and molecules that may one day be reproduced with complete accuracy?

If a robot can be programmed to feel empathy, should it still be called a robot? The great computer scientist Alan Turing believed that if the time comes when we are unable to tell the difference between the behaviour of a machine and a person, then that is the moment we must confer humanity on the machine.

At its centre, Klara And The Sun tackles these fascinating points in an original way. It emerges that Klara’s teenage owner, Josie, has some nameless ailment, and may soon die.

Josie’s mother wants to convert Klara into an exact replicant of Josie, believing that, by doing so, Josie will live for ever.

But Josie’s father is more sceptical. ‘Do you believe in the human heart?’ he asks Klara. ‘I don’t mean simply the organ, obviously. I’m speaking in the poetic sense. The human heart. Do you think there is such a thing? Something that makes each of us special and individual? And if we just suppose that there is. Then don’t you think, in order to truly learn Josie, you’d have to learn not just her mannerisms but what’s deeply inside her? Wouldn’t you have to learn her heart?’

The problem with Klara And The Sun is that, for all its ingenuity, it is a bit of a plod. There is little characterisation, and they all speak in remarkably similar voices: you might almost say that, whether they are humans or Artificial Friends, they all sound like robots, created by Kazuo Ishiguro.

In a recent interview, he revealed that he originally intended this as a children’s book, until his daughter told him that any child would be traumatised. But there are still moments when its simplistic origins poke through.

Indeed, when Klara said ‘I could tell that the Sun was smiling towards me kindly as he went down for his rest’, I found myself coming over all queasy, and wondering if my wiring had gone awry, and I had accidentally tuned in to the Teletubbies.