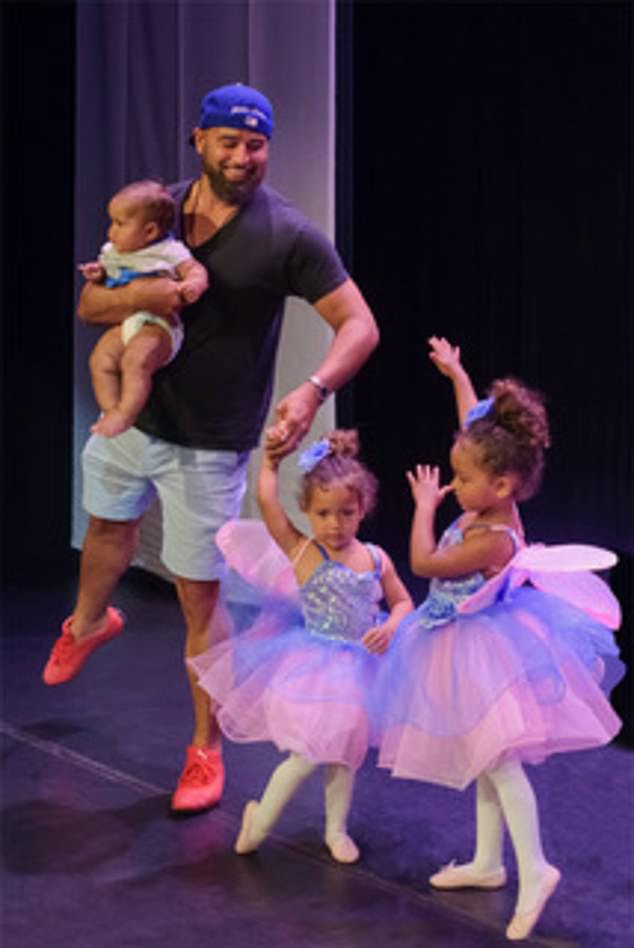 A doting father-of-three who went viral when he performed a ballet routine with his daughter has written a children’s book about the experience.

Marc Daniels, from Bermuda, stepped up on stage when his then two-year-old daughter Bella became anxious and scared during a dress rehearsal for her dance recital.

Carrying his youngest child in his arms, Marc pointed his toes and pirouetted while Bella danced in a tutu by his side.

The clip, filmed in 2018, swept the internet and has inspired Marc, a barrister, to write a children’s book, The Story of Daderina: The Daderina Series, about his special moment with his daughter.

Marc Daniels holds Bella’s hand on stage as she suffers from stage fright. He knew the routine because he’d scheduled his meetings around the girls to spend as much time with them as possible 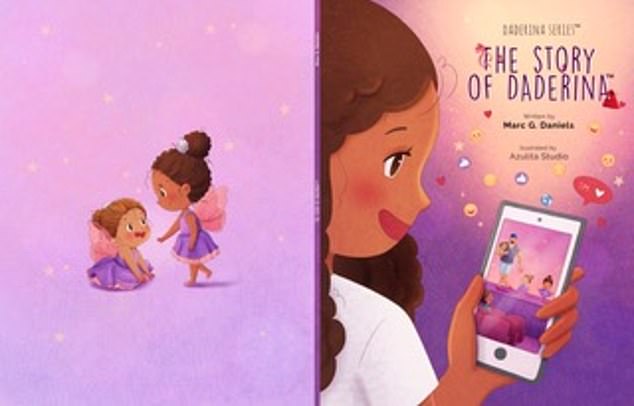 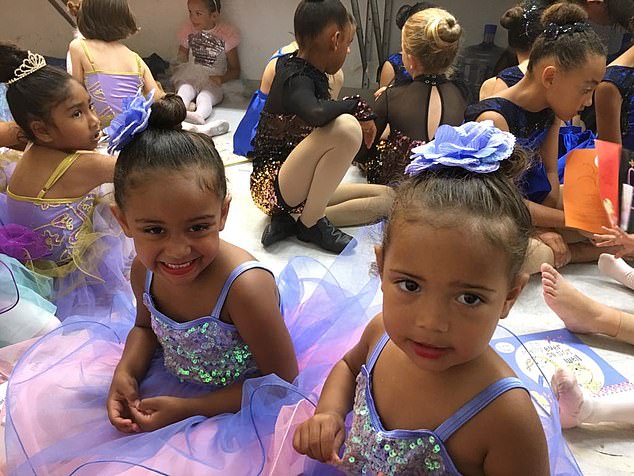 Bella and her older sister Giada backstage. Later, when Bella performed the real thing on stage, the audience recognised her from the dress rehearsal and gave her a huge round of applause

Recalling the event, Marc said: ‘Bella was super excited to dance that day. She adored her costume. She loves to dress up so she was in her element. She kept talking about how much she wanted to dance on stage.

‘On the drive to the theatre, we promised to buy the girls ice cream after they finished their dress rehearsal. Unfortunately, the pre-ballet class had to wait about an hour before it was their turn to go on stage.

‘By that point, Bella was ready to leave because her mind was fixed on getting ice cream.

‘She started to have a tantrum backstage and she was asking for her daddy. I was upstairs waiting in the lobby with our youngest child, Suri who was only 8 months old. The owner of the dance company came to me and told me that Bella was crying and that she wanted me to come downstairs to her.

‘I went back stage and held Bella. She calmed down. Within a matter of minutes, her class was called to go on stage. My wife and I escorted the girls to the stage and I was holding Suri.

‘When Bella went on stage she started crying again. The staff suggested that I take her off of the stage. I knew how much she wanted to dance. She was just in the middle of dealing with her emotions. I didn’t want to undermine her confidence and I wanted to cheer her up and encourage her.’ 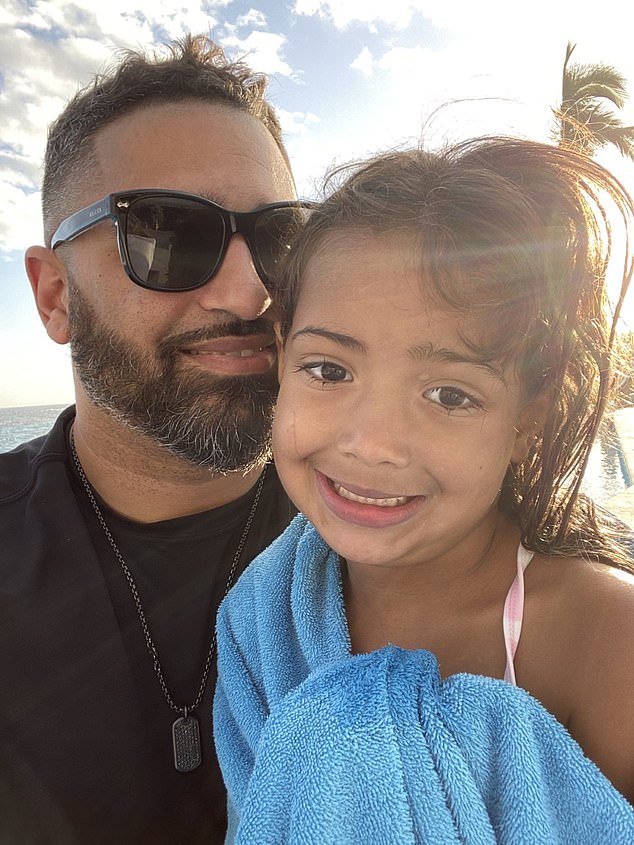 Bella and Marc on holiday together. The doting father encouraged Bella so much in her dress rehearsal that she was confident in taking on the big stage for the real thing

The video of Marc dancing with his daughter went viral on Twitter and made headlines around the world.

Marc was in court the next day when his wife informed him the video was going viral, something he’d never imagined happening yet was grateful for.

The family received messages from people saying the moment reminded them of their own experiences with their fathers. 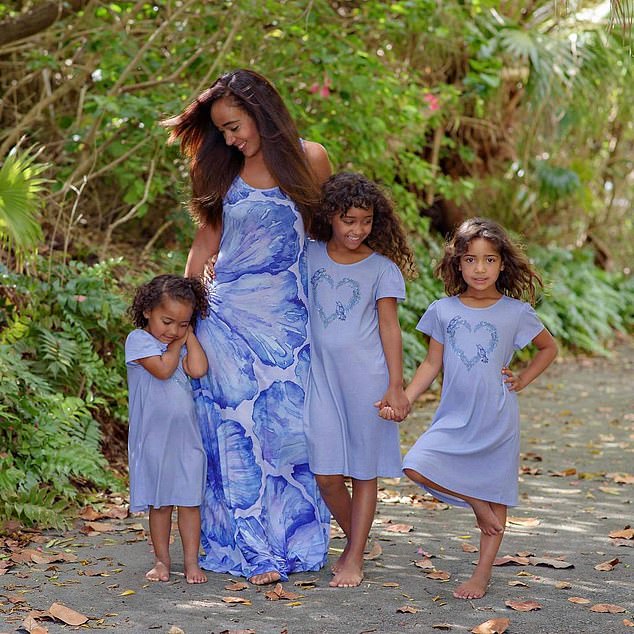 Bella on holiday with her older sister Giada, younger sister, Suri and their mother, Kim. They all helped with writing The Story Of Daderina 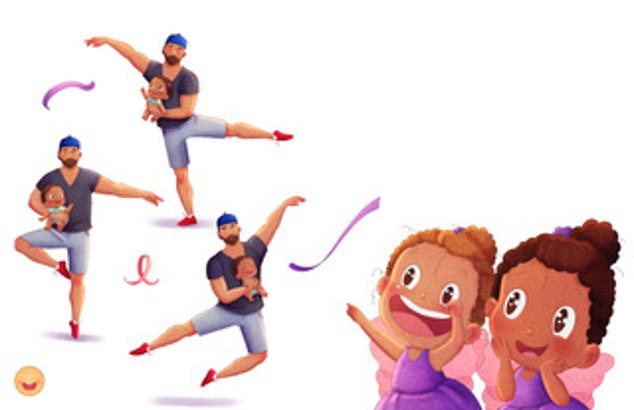 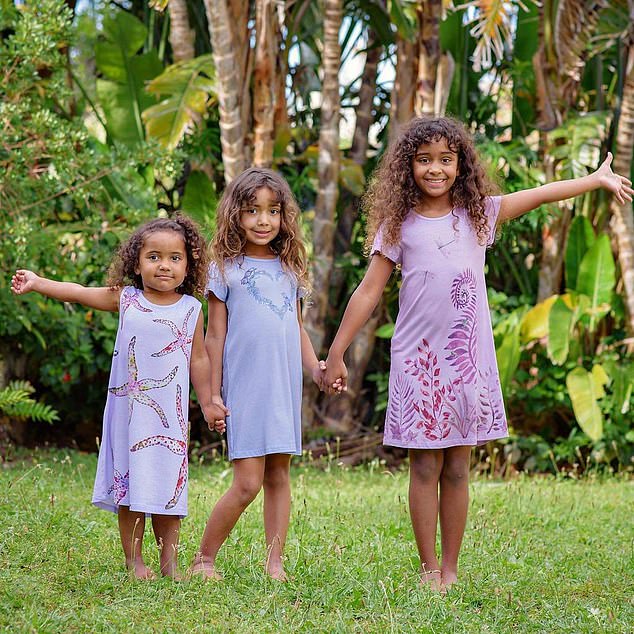 Giada, Bella and Suri on holiday. Marc knew Giada would ‘rock it’ on stage but was happy to see Bella also come into her own and find confidence 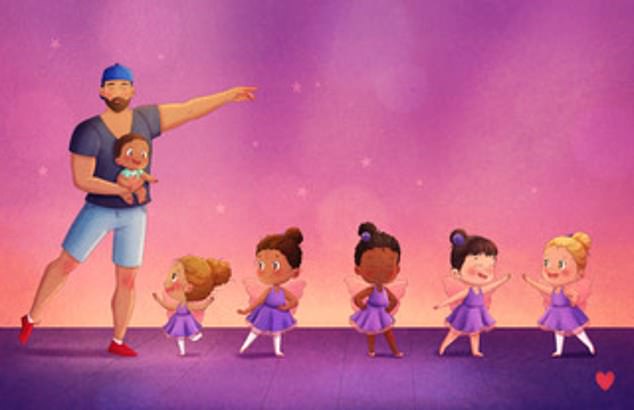 Marc and Bella are depicted on stage through colourful drawings in the book. The whole family helped with sketches and ideas

Saying that the experience gave him ‘goosebumps and tears of joy,’ Marc used this magical moment along with the family’s love of reading together to bring the story into the world with beautiful eye-catching illustrations.

‘Months after the video had gone viral, our children: Giada, Isabella and Suri, would often ask us to tell them about our viral video, especially at bedtime,’ said Marc.

‘My wife, Kim, encouraged me to write this book as a way to celebrate the joy of being a “girl-dad”.’

‘We thought that if our children loved the story this much, perhaps other children would as well.’

‘After I wrote the Story of Daderina, the children asked for more Daderina stories. With three girls, we have countless stories that we can share, which we believe parents around the world would be able to fully relate with and appreciate.’

‘We wanted to share the narrative of our viral video with other parents so that their children could equally enjoy our experience.’

‘Some of the stories in the series are incredibly funny and detail the real side of parenting: the messes, the mistakes, and the opportunities to teach valuable life lessons. Others are more fanciful. But all of our stories try to reflect a valuable point for our girls; whether it is about sharing, or demonstrating love and compassion, or exercising patience and mindfulness to others. The stories are designed to demonstrate ways within which both parents and children can learn from one another.’

‘We also found that by creating a children’s book series, we could spend time with our children and spark their creativity with the illustrations and the content.

‘We have all made sketches and taken our personal experiences to create stories that we think other families will appreciate and relate.’