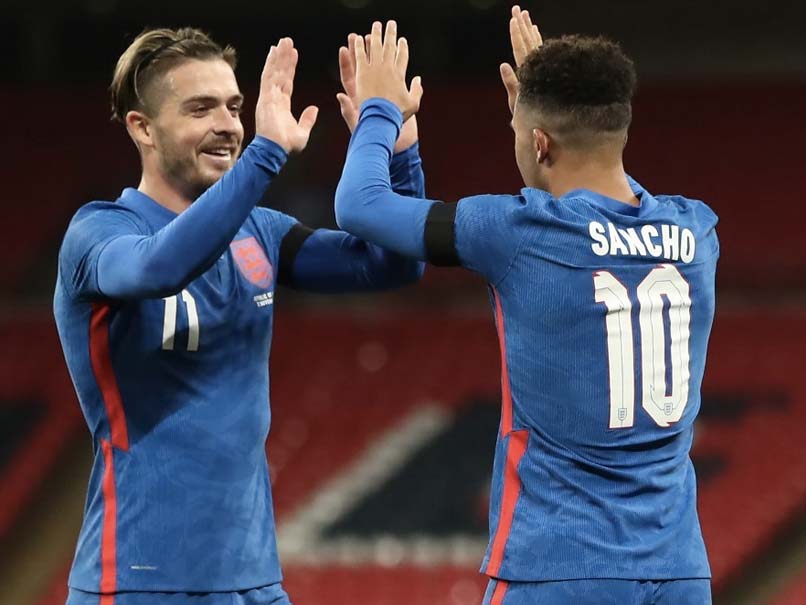 
Gareth Southgate admitted he was impressed with Jack Grealish as the England winger sparkled and Harry Maguire enjoyed a moment of redemption in Thursday’s 3-0 friendly win against the Republic of Ireland. Just 48 hours after the resignation of English Football Association chairman Greg Clarke following his offensive comments about the BAME and LGBT communities, Southgate’s side showed no signs of being distracted by the controversy. After being sent off in his previous England appearance against Denmark, Maguire captained his country for the first time and scored the opening goal at Wembley.

It was a welcome boost for Maguire, who has endured a difficult campaign marred by his Greek court case and poor form for Manchester United and England.

Jadon Sancho bagged England’s second goal before the interval and Dominic Calvert-Lewin made it three with a second-half penalty.

That was enough to seal England’s first success against the Republic since 1985.

Grealish, starting against the country he represented at youth level, caught the eye on the left flank as he justified the constant calls from fans and pundits for the Aston Villa star to be given a sustained run in the team.

“The two players in those roles, Jadon and Jack, they’ve got the freedom to go either side of the pitch and try and create overloads,” Southgate said.

“I thought at times both of them did that really well. Of course, as soon as they are turned and running at people, they are a real problem for the opponent.”

There was a landmark moment for Jude Bellingham, who became the third youngest player to represent England when the 17-year-old Borussia Dortmund midfielder came on for Mason Mount in the 73rd minute.

Bellingham, who left Birmingham to join Dortmund earlier this year, is behind only Theo Walcott and Wayne Rooney in the list of England’s youngest players.

The teenager is one for the future, but Southgate will have been more encouraged by the way his understudies impressed after he rested Harry Kane, Raheem Sterling and Jordan Henderson before the Nations League games against Belgium on Sunday and Iceland next Wednesday.

“I was very pleased with the way the boys played. A lot of young players, a lot of inexperienced players, we used the ball very well, created a lot of chances, could have been more comfortable if we’d taken some of those chances but overall very pleased,” Southgate said.

“We were a bit slow at the start but that’s understandable. It’s not a team that have had a lot of time to work together.

“The longer they went on, some of the interplay, some of the play between our attacking 10s and our wing-backs in particular was very good.”

Southgate had urged England to put the focus back on football after Clarke’s self-inflicted demise triggered a “turbulent week” and his team were always in control in their first meeting with the Republic since 2015.

Maguire put England ahead in the 18th minute when Harry Winks crossed back into the area and the defender rose above Shane Duffy to head past Darren Randolph for his second goal in an England shirt.

Sancho has been struggling to find his peak form for Borussia Dortmund this season, but the winger showed his quality to double England’s lead in the 31st minute.

Grealish teed him up on the left side of the Ireland area and Sancho shifted the ball onto his right foot before curling a low strike past Randolph.

Bukayo Saka won a penalty in the 56th minute when he wriggled past Cyrus Christie, who responded with a clear trip on the Arsenal wing-back.

Everton striker Calvert-Lewin stroked the spot-kick high into the roof of the net for his second England goal.

Manchester United’s Dean Henderson had come on for his England debut at half-time, replacing Nick Pope in goal, but he was barely tested as the hosts cruised to the final whistle.