How on earth could my healthy son drop dead without warning?’ 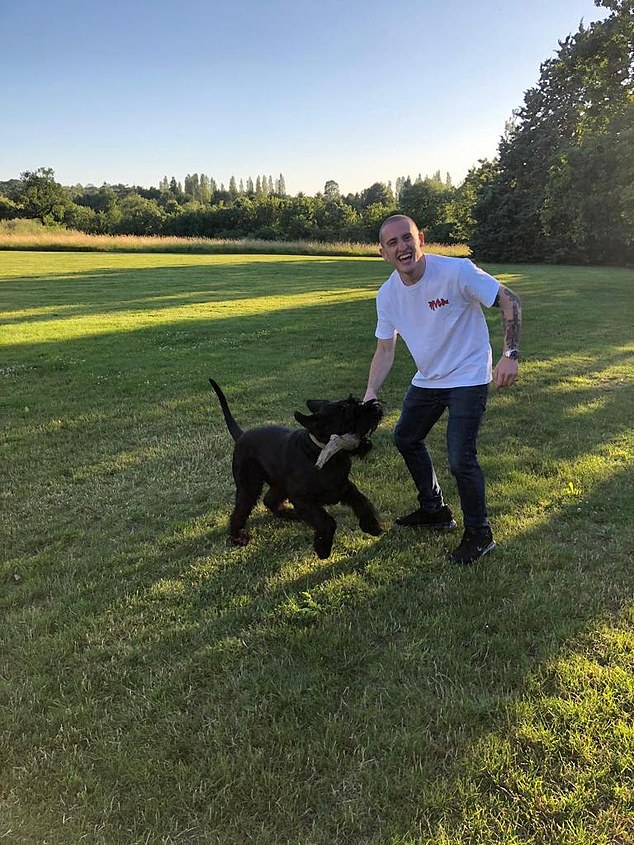 Toby playing with his friend’s dog Desmond, just one month before he died

Toby Berlevy was a fit 22-year-old with a promising future. Now his mother Sam Richards is still trying to make sense of her loss and, tragically, the fact that a simple test could have saved his life. By Anna Moore

A magical time for any mother is the moment her child stands on the cusp of adulthood, suddenly certain of who they are and what they want to do. It’s a time to step back, take a breath and feel excited about the next chapter.

This is how Sam Richards felt about her 22-year-old son Toby Berlevy in the summer of 2019 – and this is also when she lost him: without warning, accident or apparent illness.

Toby was the elder of Sam’s two sons, gentle, funny, practical and organised. ‘He was the only person in my life, apart from my husband, who could make me feel everything was all right just by being there,’ says Sam, 54, a television producer who lives in West London.

After leaving school, Toby had worked in Japan as a ski instructor before returning to the UK in 2019 to work in TV as an assistant floor manager. Neither job proved to be his passion and, that spring, he announced his intention of joining the Royal Marines.

‘Toby had always been interested in the military. He’d been an Air Cadet. He was a brown belt in jujitsu – he was very disciplined,’ says Sam. ‘At 18, he’d talked about joining the Army and I was relieved that he hadn’t. But now, it was like he’d found his purpose. He knew his path and he was so, so happy. I thought, “It’s what he wants to do, he’ll make friends and see the world. Let’s go with it.”’

A few months later, after passing the first set of entrance tests, Toby was preparing for the final hurdle – a gruelling eight-week training course. ‘He was pushing himself to get super-fit,’ says Sam. ‘Lots of runs, press-ups, pull-ups – and he wasn’t someone who had done a lot of very aerobic sports.’

On 30 July, a normal Tuesday, Sam called Toby at 9.30am but got no reply. It didn’t seem too unusual but, when he hadn’t called her back by the end of the day, she decided to pop to his flat on her way home from work. Toby lived with his younger brother Jonnie who was out that day, but when Sam arrived she was surprised to see that Toby appeared to be in, as his beloved motorbike was still outside. ‘I didn’t have a good feeling, I don’t know why,’ says Sam. ‘I let myself in and went through the hallway. Toby’s porridge bowl was still out from breakfast. I looked into his bedroom and he was lying on the floor next to his bed. I didn’t understand. I thought, “Tobe? What are you doing?”’

As she neared her son, Sam saw that his lips were black. When she touched him, his body was firm. ‘I’ve never seen a dead body before but he was unmistakably dead.’ 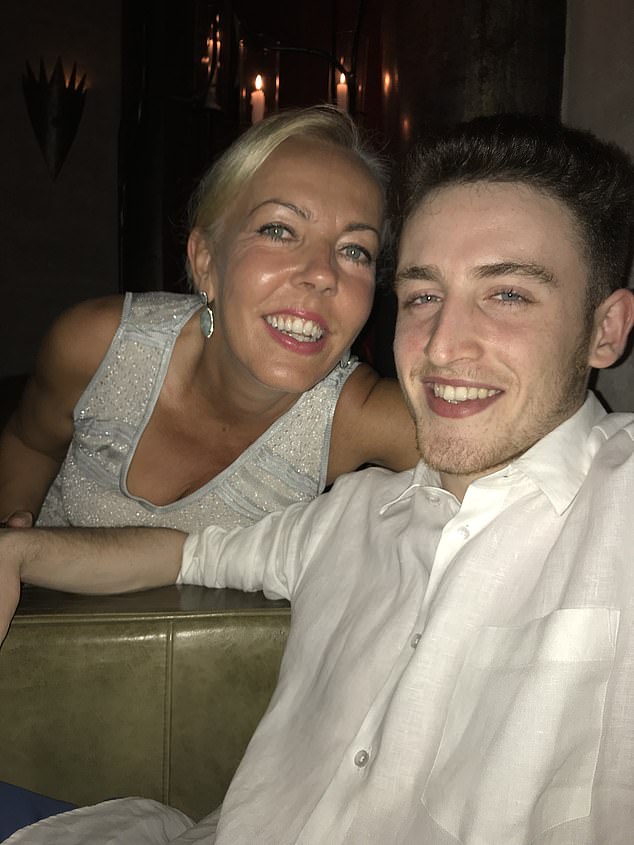 The next hours were a blur but Sam recalls a paramedic saying that it ‘could have been his heart’. The post-mortem, in addition to ruling out foul play or suicide, confirmed this and Toby’s death was registered as SADS (sudden arrhythmic death syndrome).

Over the coming weeks and months, Sam was to learn that SADS is the third-biggest killer of young people in the UK, after road traffic accidents and suicide. Each year at least 600 young, seemingly healthy people die suddenly from undiagnosed heart conditions, though experts believe the number could be far higher. There is an inherent difficulty in determining electrical cardiac defects after death because the electricity dies with the heart. Mysterious drownings, unexplained car or motorbike accidents and sudden falls might often be explained by a cardiac arrest that was never identified.

‘How on earth could my healthy son drop dead without warning, or any previous events of breathlessness or fainting?’ says Sam. ‘Well, now I was in this new world, and beginning to learn how that can happen.’ Tortured by ‘if onlys’ and reeling from her loss, Sam decided that she needed to take action to try to prevent other parents suffering as she had done. ‘I could sit in the corner and curl up in a ball, but Tobe wouldn’t want that – and that’s not a good example for Jonnie,’ she says.

She decided, instead, to make a documentary about SADS. Although she acknowledges that she may have been ‘hiding in work’, Sam also wanted to try to show parents what they can do to prevent similar tragedies. Within four months of Toby’s death, she had pitched an idea to the BBC. Rather than telling the story of her own loss, which at the time was still too painful to share, Sam’s film focuses on another family, the Meads, deep in grief and blindsided by SADS exactly as her family were.

Lauren Mead from Frome in Somerset was just 19, a fit and seemingly healthy young woman, when her mother found her dead in her bed one morning. The documentary, My Sister’s Silent Killer, follows Lauren’s brother Patrick as he struggles to make sense of what happened. The opening scene features the harrowing 999 call made by Lauren’s mother, which Sam says is heartbreakingly similar to the one she made herself. The operator can be heard explaining how to perform CPR, urging Lauren’s mother to keep trying.

Any SADS death leaves so many unanswered questions, says Dr Steven Cox, chief executive of the charity Cardiac Risk in the Young (CRY: c-r-y.org.uk). ‘We’re always working with a puzzle where there are missing pieces.’ The death might be triggered by sport or exercise, but some deaths have other triggers – jumping into cold water, walking into a hot sauna, being woken by an alarm clock, or even taking certain common medications like particular antihistamines or antidepressants which can impact our QT (the resting time between heartbeats). According to Dr Cox, 80 per cent of SADS deaths occur at rest or during sleep – and leave no time for resuscitation. (Sam believes that Toby had completed a workout then taken a hot shower before his sudden death.)

‘The only way an electrical fault can be detected – preventing a SADS death – is through screening people while they’re alive,’ says Dr Cox. A medical history is taken followed by an electrocardiogram (ECG) – and this is what saved Dr Cox himself 28 years ago when he was just 18.

At the time, he was on the cusp of a professional tennis career, studying in the US on a sports scholarship. All athletes at that level in America received mandatory screening and, despite being incredibly fit and asymptomatic, Cox was found to have a rare but potentially fatal condition, arrhythmogenic right ventricular cardiomyopathy (ARVC), which can interrupt the heart’s electrical signal. After he learned that continuing as an athlete would almost certainly kill him, he returned to the UK, and his mother founded CRY soon afterwards. 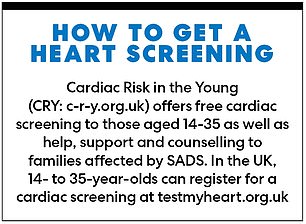 CRY gives support and counselling to families affected by SADS but also offers screening to anyone aged between 14 and 35 (though halted through the pandemic, it’s due to resume this summer). Most of this is funded by bereaved families who raise money for mass screenings within their own communities. Of the 32,000 young people screened by CRY, one in 300 has been found to have a potentially fatal abnormality. The good news is that, once detected, these conditions can be treated or corrected with medication, monitoring, surgery or pacemaker-like devices.

While numerous private health companies offer screenings (priced at around £250), and screening is now common in young British elite athletes, Dr Cox is lobbying for a national mandatory screening programme to check everyone aged over 14 at least once. ‘In Italy, screening is much more extensive and the data shows an 89 per cent reduction in SADS deaths,’ he says.

For Sam, this knowledge came too late. ‘If I’d known about SADS when Tobe was going to go into the level of cardio training that he was doing, I’d have had the awareness to say, “Let’s take you for an ECG first,”’ she says. ‘You can even get them done privately with the likes of Cardio Direct.’ Fortunately, subsequent tests on Jonnie, three years younger than Toby, have been clear.

‘There isn’t a second of a minute of a day where he [Toby] is not front and centre of my thoughts,’ Sam continues. ‘I see him in everything, in everyone. I see people walking around and I think about Tobe and what he should be doing. Sometimes I think he’s going to rock up on his motorbike.’

What has helped? ‘I have the most incredible support system,’ says Sam. ‘Family, colleagues and the most unbelievable partner who’s incredibly wise, very gentle and just stands by my side, letting me be how I need to be.’ In December 2019, Sam’s partner Stuart proposed and they married a year later. ‘It’s funny,’ she says. ‘A few years ago, Tobe said to me, “Mama, if Stuart wanted to marry you, it’s all right with me,” so we absolutely knew it was with his blessing.’

Sam’s aim now is ‘to do what Tobe would have wanted, which is to be strong and go on’. Her son Jonnie feels exactly the same. ‘After Jonnie’s graduation, we went out for lunch and he said to me, “I really want to live the best life possible and do everything I can because Tobe can’t,”’ says Sam.

The documentary is very much part of this. ‘In the weeks and months after Tobe’s death, if we told people how he had died, lots would say, “Oh, I know someone who died like that” – so I started to think that we needed to get this out to the general public,’ says Sam.

Finishing the film and travelling to Frome to show the final cut to Lauren’s parents Paddy and Maria, and her brother Patrick, was emotional. ‘They were incredibly moved and really positive,’ says Sam. ‘In the same way that making it was a legacy, something to do for Tobe and his memory, they felt that it was something for Lauren, too.

‘There’s still a lot we don’t really know about SADS – but we know more than we did. If the film raises awareness and maybe helps to save one life, then it’s worthwhile.

I feel like Tobe was there, saying, “Come on Mama, we can do this. This is a good thing.”’