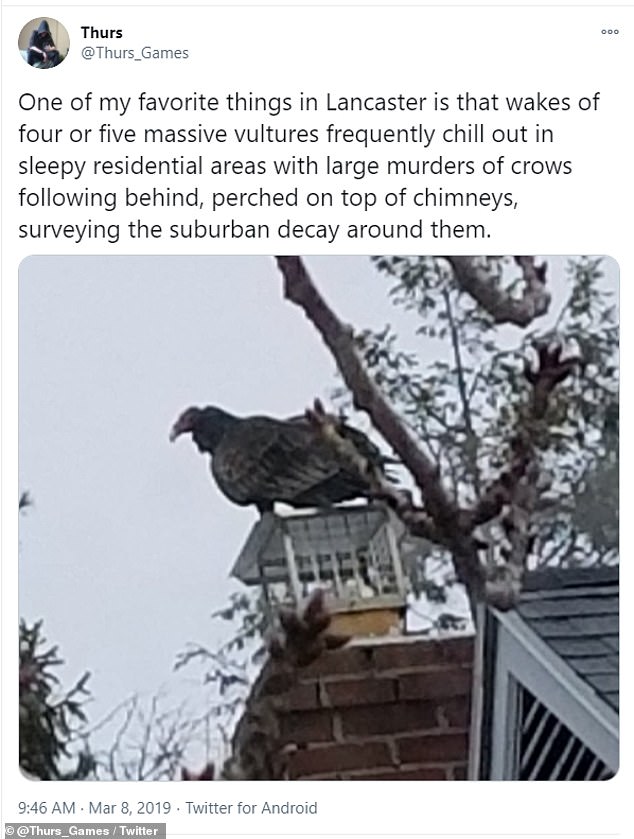 Residents of Marietta, Pennsylvania, feel like their town has been turned into a remake of Alfred Hitchcock’s The Birds.

Only instead of seagulls and sparrows, they’re facing a massive infestation of black vultures, which can have wingspans of up to five feet.

The scary scavengers are tearing up rooftops and garbage cans, and blanketing trees with their droppings.

Residents have resorted to banging on pots and pans and shouting at the birds to shoo them away—some have even lit fireworks.

Others hang taxidermied vultures on their property, because the birds appear to be scared of their own dead.

More permanent solutions are in short supply, as the black vulture is federally protected and can’t be exterminated without permission.

A resident of northern Pennsylvania snaps a photo of a black vulture roosting on her rooftop. The carrion-eaters have descended on Marietta, with hundreds taking up residence in a single block

It’s illegal in the US to trap, kill or own black vultures without a permit and violators can face a fine of up to $15,000 and up to six months in prison.

The vulture effigies are effective but expensive and require permission from authorities.

The birds have been a growing problem in northeast Pennsylvania for at least a decade but ‘this is the worst year,’ Marietta resident John Enterline told LNP. ‘There are many more of them.’

In the fall and winter, the vultures prefer to roost in groups and are attracted to the heat given off by homeowners’ black roofs. 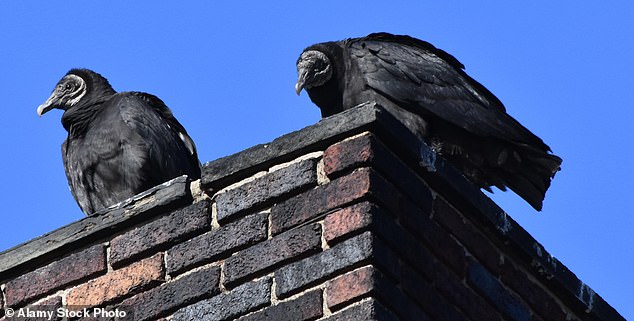 A pair of black vultures warm themselves by a chimney. The birds are known to tear up shingles and rubber roofing materials, causing thousands in property damage 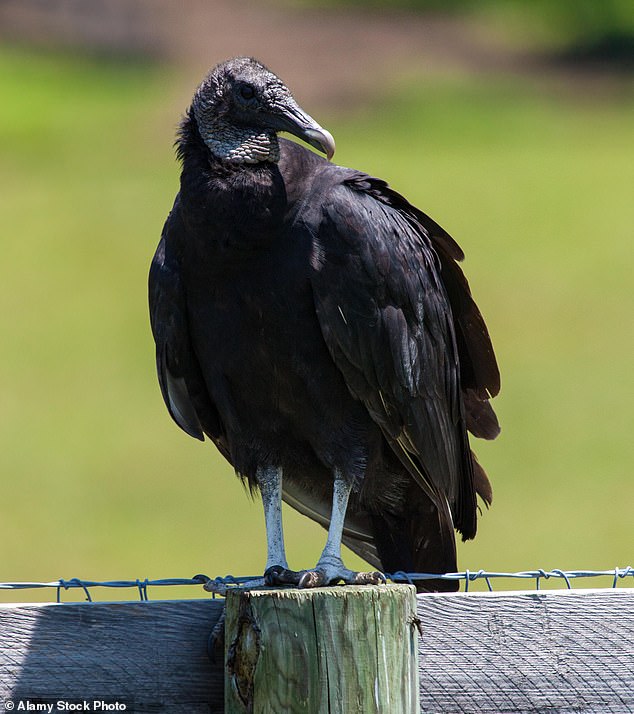 Black vultures are a major nuisance — eviscerating windshield wipers and weatherstripping, and tearing up garbage cans looking for scraps. But they’re federally protected and can’t be trapped, killed or owned without a special permit

Hundreds can be seen on a single block, sunning themselves on trees or pecking at shingles and tearing up rubber roofing materials.

The vultures have also been known to eviscerate windshield wipers and rubber weatherstripping from around windows.

‘They seem to be really drawn to anything that is plastic or rubber,’ one homeowner told LNP. ‘They have been really destructive.’

Homeowners’ insurance typically doesn’t damage caused by wildlife, and residents can spend several thousand dollars out of pocket on repairs. 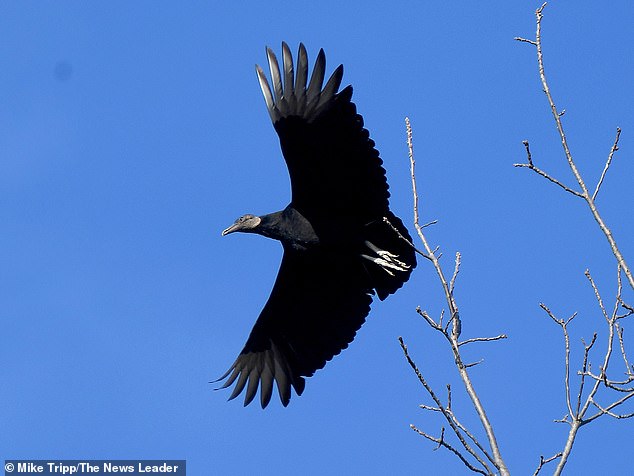 Black vultures have wingspans that can reach five feet long and are far more aggressive and destructive than turkey vultures, which are also common in the area 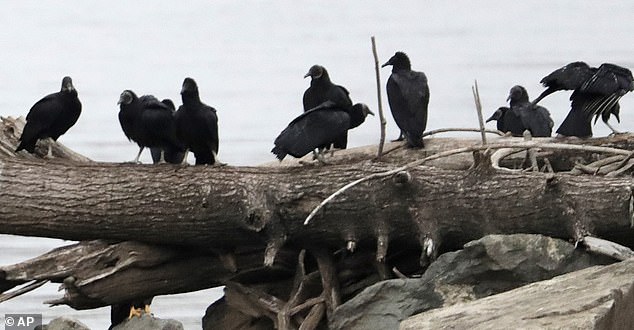 Experts say black vultures have become more prevalent in Pennsylvania and nearby states in the past five to ten years. The birds are traditionally migratory but climate change is making them stay put in the northeast longer.

Black vultures are protected by the Migratory Bird Treaty Act of 1918 and bans on DDT and other harmful pesticides have also helped their numbers to grow.

‘Historically, the black vultures were limited to the southeast part of the country,’ Matt Rice, a wildlife biologist with the USDA Pennsylvania Wildlife Services program, told The Patriot-News in 2019. ‘Over the past few decades — really more specifically in central Pennsylvania over the past five years — we’ve seen a large increase in numbers, and with that, the number of calls we get in terms of damage and conflicts.’

In the past, the birds were migratory but climate change is encouraging them to stay put in the northeast longer.

There’s more at stake than property values: While usually scavengers, black vultures have been known to kill small animals, making them a problem for farmers and pet owners.

Their droppings can kill trees and plants, and carry diseases like salmonella and encephalitis.

The vultures also regurgitate a noxious corrosive vomit as a defense mechanism: A couple whose Florida summer house was overrun by black vultures told The Palm Beach Post the stench was ‘like a thousand rotting corpses.’

And the birds have been known to accidentally drop prey from 300 feet in the air,  Quartz reports, damaging radio towers and other property and terrifying passersby.

Marietta councilperson Bill Dalzell says it’s time for the borough to look at ways to help residents, including lethal options.

Municipalities can apply for federal permits to kill black vultures, and residents hope a small culling would scare the rest away.

‘I would certainly look into it and consider it,’ Dalzell told LNP. ‘I think the borough has a responsibility.’

WHAT IS THE BLACK VULTURE?

Black vultures have black plumage, a bare black head and neat white plumes under their wingtips. 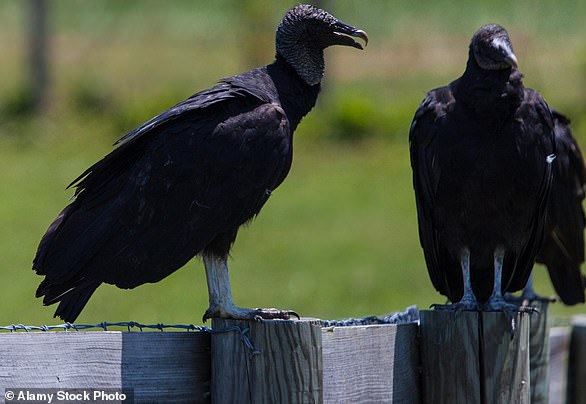 Black vultures perched on a fence in Lancaster County, Pennsylvania

Black vultures feed on carcasses but also newborn calves, goats and lambs and will occasionally attempt to feed on adult livestock.

Though not endangered they’re  federally protected by the Migratory Bird Treaty Act of 1918.

They have keen eyesight but a poor sense of smell and no vocal organ—the only sounds they make are growls and low hisses.

Turkey vultures are native to the southeast US and South America, climate is encouraging the birds to venture further north.