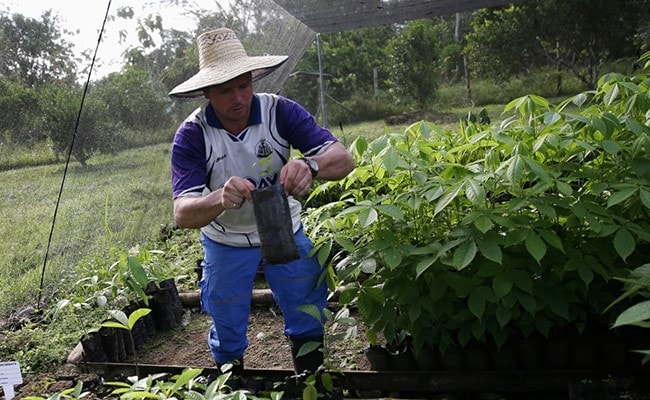 An environmental activist in southern Colombia’s steamy jungle province of Putumayo was preparing to run some errands earlier this year when she received a warning from a contact, she said.

“He wrote me a message saying it’s better I don’t go outside…They’ve sent someone to kill you three times already,” she recalled, referring to crime gangs operating in her village. Reuters could not verify the content of the message.

The woman, who has protection from government bodyguards, is one of scores of activists under threat in Colombia, the world’s most dangerous country for environmentalists.

She fled her village last October after her activism and opposition to drug crops that damage the Amazon rainforest made her a target for crime gangs.

For her protection, Reuters has not named the activist nor the criminal group, though her story was corroborated by a U.N. Development Program team.

A record 65 environmental defenders were killed in Colombia in 2020, according to a report published on Monday by advocacy group Global Witness, nearly one-third of the worldwide total.

“The environment ministry will work to provide the country with solid management mechanisms for prevention, protection and guarantees for non-repetition (of violence),” the statement said.

Colombia’s government has blamed crime gangs and leftist rebels involved in drug trafficking for the rise in activist killings. Reuters was unable to contact the armed groups.

Global Witness says its annual tally is likely an underestimate because many killings in rural places, as well as some entire countries, go unreported.

It marks the second year in a row Colombia registered the most killings, despite government promises to increase security in rural areas and offer activists protection.

President Ivan Duque could leave office next year with environmental activist killings having more than doubled during his term, according to Global Witness’ annual tally.

The deaths of Colombian human rights and community activists of all stripes have sparked exhortations from the Office of the U.N. High Commissioner for Human Rights for Duque’s government to step up protective measures.

Killings of environmental activists dipped briefly in the two years after a 2016 peace deal between the government and the leftist guerrilla group, the Revolutionary Armed Forces of Colombia (FARC), according to Global Witness figures.

The peace deal led to a general decline in violence, but the FARC’s demobilization opened a power vacuum in some areas.

Former FARC fighters who reject the deal, members of remaining rebel group the ELN, and crime gangs are now battling for control in many areas.

Laura Furones, Global Witness’ senior adviser for its land and environmental defenders campaign, said the increase in activist killings was due to “the lack of state action in terms of implementing the peace accord,” which had led to the growth in competing armed groups. Activist murders soared to 64 in 2019, well above pre-accord figures of 37.

“There’s been many areas of the country (which) have been overtaken by guerrillas, paramilitaries and other criminal groups,” said Furones, calling on Duque’s administration to do more to protect activists. “We see really worrying trends upwards and that tells us that whatever the government’s doing is by no means enough.”

The activist in Putumayo fled after threats from the armed group that wants locals to tear down forest to plant coca, the chief ingredient in cocaine. She was given state-funded bodyguards and an armored car after she fled, but longs to be able to return safely to her village.

The national protection unit, which provides bodyguards to officials and threatened public figures, said it does not confirm the identities of those it protects.

“Since October last year I haven’t been able to go near the area,” she said, adding that she misses her neighbors and drinking her morning coffee gazing from her window.

“For all the protection you get from the state…I wouldn’t for a moment trade that for the tranquility of my home,” she said.

Seventeen of the Colombian environmentalists murdered in 2020 were involved in coca crop substitution programs, Global Witness found. Reuters could not independently verify the figures.

Some environmental activists are also ex-FARC guerrillas, making them potential targets for their former brothers-in-arms who reject the peace deal and reap hefty profits from coca and illegal mining, activists, the government and advocacy groups say.

At least one environmental activist – Hernando Jose Molina – included in Global Witness’ list of those killed last year was an ex-fighter who had signed the 2016 peace deal, according to a report by local advocacy group Somos Defensores. Reuters could not independently confirm this.

Former guerrilla Jorge Santofimio leads a network of tree nurseries in Putumayo and two other provinces, growing saplings meant to restore damaged parts of the Amazon, with help from the U.N. Development Program.

He and other ex-guerrillas hope the work will reconcile them with communities who suffered during the conflict, but Santofimio said that their activism was making them a target for armed groups.