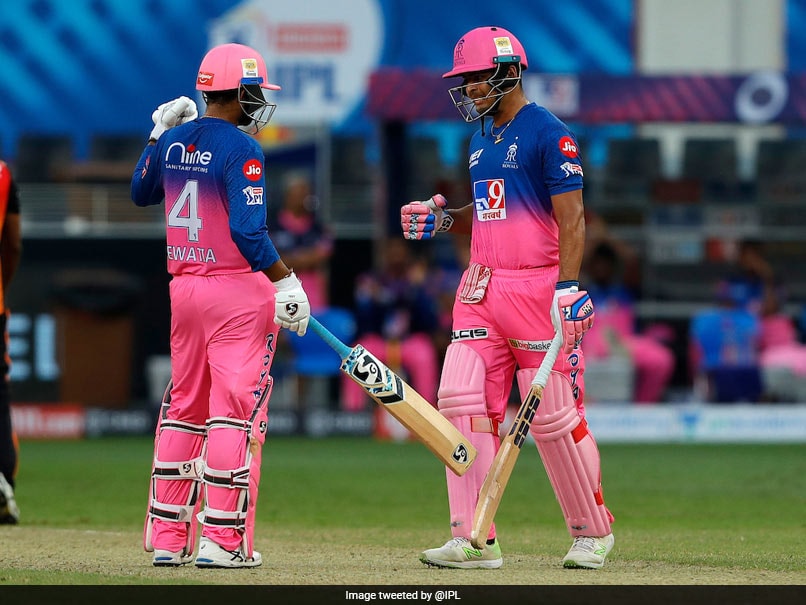 
Rahul Tewatia (45 not out off 28 balls) and Riyag Parag (42 not out off 26 balls) put on an unbeaten 85-run stand for the sixth wicket as Rajasthan Royals pulled off a thrilling chase against SunRisers Hyderabad at the Dubai International Cricket Stadium on Sunday. With this five-wicket win, Steve Smith’s side ended their four-match losing streak and registered their third win of the season. Defending 158, SRH were on top for the majority of the innings but Tewatia and young Riyan Parag held their nerves and took the game deep. With 65 runs required in the last five overs, both the batters changed gears and put pressure back on the SRH bowlers.

Tewatia turned the game on its head when he smashed three consecutive boundaries in the 18th over bowled by Rashid Khan when 36 runs were needed off the last three. He smashed a four and a six in the penultimate over bowled by SRH’s death-over specialist T Natarajan to pull them even closer to the target. With eight need off the final over, Parag cleared the cover point fence on the second-last ball to complete an nail-biting win.

Earlier, Rashid had spun a web around Rajasthan Royals’ middle-order to put his side in a commanding position. Rajasthan’s ploy to send all-rounder Ben Stokes to open the innings didn’t pay off as he got out in the second over after scoring just five runs.

Their poor start took a turn for worse when a brilliant piece of fielding got rid of Steve Smith. Jos Buttler scored a couple of good boundaries in his brief knock but couldn’t capitalise, going down to Khaleel Ahmed in the fifth over.

SunRisers, despite a slow start, still managed to post a fighting total, scoring 158/4 in their 20 overs. They didn’t get the best of starts and suffered a major blow as Jonny Bairstow perished trying to take on young Kartik Tyagi in the fifth over.

Skipper David Warner and Manish Pandey steadied the ship and ensured that they had wickets in hand. Jofra Archer and leg-spinner Shreyas Gopal were quite impressive upfront with their tight line and lengths and reduced SRH to 26/1 inside the Powerplay.

After the fielding restrictions eased out, both Warner and Pandey batted sensibly and stitched a crucial 73-run stand for the second wicket, scoring runs at a brisk pace without taking too many risks.

Searching for a wicket, Steve Smith handed the ball to his strike bowler Jofra Archer and he didn’t disappoint his skipper, cleaning up a well-set Warner who was two short of his half-century. Pandey tried to take the attack to the RR bowlers but fell soon after completing his half-century.

A late cameo from Kane Williamson (22 not out off 12 balls) and young Priyam Garg (15 off 8 balls) helped SunRisers get past the 150-run mark, giving their bowlers something to fight with on a slow pitch.

Archer was the most economical bowler for Rajasthan and returned with figures of 1/25. Kartik Tyagi and Jaydev Unadkat also picked up a wicket each.