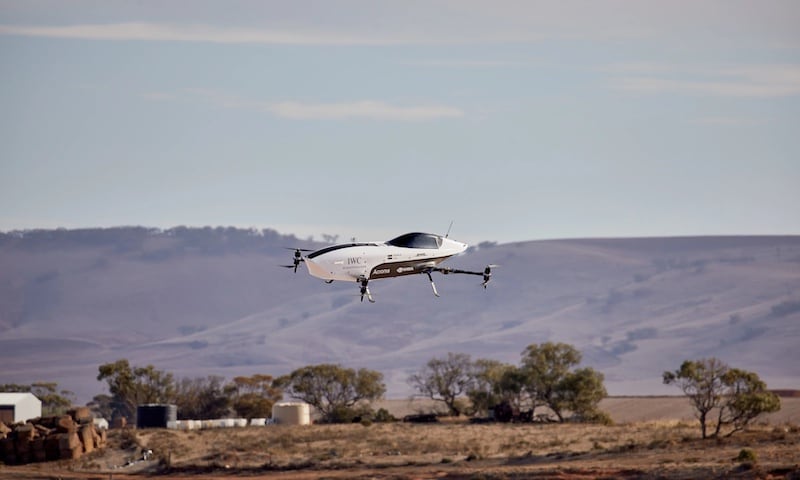 Meet Airspeeded – an electric uncrewed flying race car company. It’s called the Alauda Mk3 and was tested over a desert in southern Australia. In a video posted on YouTube, the drone was manoeuvred remotely in the air to navigate delicate turns and reached speeds above 150kmph. Airspeeder — the electric vertical take-off and landing vehicle (VTOL) flying car racing series — hopes to organise the first unmanned air race, the EXA Series races, later this year that is likely to feature the full grid of multi-rotor unmanned Mk3 racing craft.

“This is the future of racing… for pilots and flying machines to merge at the digital frontier,” a voice-over says as the 45-second video begins.

Up to four teams with two remote pilots per team will compete in three individual events during the race series. “They will race ‘blade-to-blade’ over locations inaccessible to traditional motorsport,” Airspeeder said in a statement.

The Mk3 weighs around 130 kg without a pilot and can reach a speed of 100 kmph in 2.8 seconds and can fly at an altitude of up to 500 metres. It has a removable battery, which can be replaced within 20 seconds making it able to be back in the race quickly. One fully charged battery pack can power the craft for 10-15 minutes, it said.

On safety measures used in the aircraft, Airspeeder said it employs a systems-based approach, meaning that a single operational failure won’t lead to loss of the primary function of the vehicle, which is controlled flight. During flights, all systems are monitored on the ground through a telemetry system.

Matthew Pearson, Founder, Airspeeder and Alauda Aeronautics, said the world is ready for advanced air mobility and Airspeeder and EXA represent the future of motorsport.

The racing vehicles are designed and built by Alauda Aeronautics. The EXA Series is Airspeeder’s first racing series, where remote pilots will take control of the world’s first full-scale electric flying cars, the statement added.

Bitcoin Outlook Clouded by ‘Death Cross’ Chart Formation: All You Need to Know