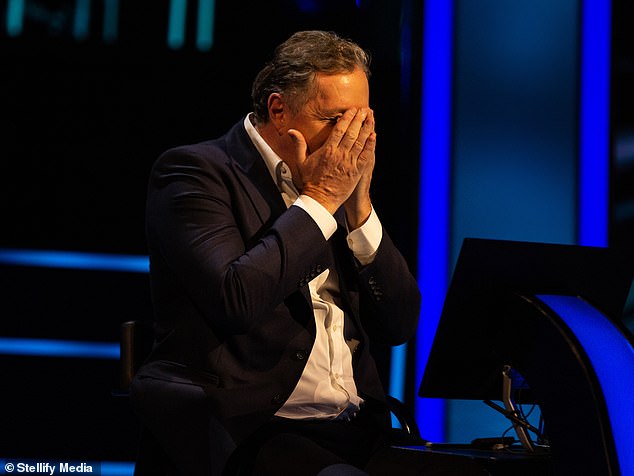 My much-hyped appearance on Who Wants To Be A Millionaire? aired tonight, and millions of viewers saw me crash out on a question that I suspect 99 per cent of all those chortling over my embarrassingly premature demise wouldn’t have been able to answer.

(It was this: ‘Which of these world champion racing drivers has not been a team-mate of Lewis Hamilton in Formula 1: a) Kimi Räikkönen, b) Nico Rosberg, c) Fernando Alonso, d) Jenson Button?)

The chortlers included Susanna ‘know- it-all’ Reid, my spectacularly useless Phone A Friend, who didn’t even manage a wild guess before the 30-second clock ran out.

My much-hyped appearance on Who Wants To Be A Millionaire? aired tonight, and millions of viewers saw me crash out on a question

Not wanting to risk the £16,000 I’d raised to that point for my charity, Scotty’s Little Soldiers, I told host Jeremy Clarkson that if I guessed wrong, and fell back to £1,000, I would personally stump up the lost £15,000.

I guessed Button, it was Räikkönen, and I exited £15,000 out of pocket. ‘Congrats, Morgan,’ observed one viewer on Twitter, ‘the only person to appear on Millionaire and leave worse off.’

Of course, my old foe Clarkson loved it – even quoting Chinese warrior Sun Tzu, smirking: ‘They do say that if you wait by the riverbank for long enough, the bodies of your enemies will come floating by, and yours has come by. You’ve humiliated yourself. Goodbye.’

Still licking my wounds, I watched Millionaire again tonight and witnessed comedienne Ronni Ancona sensibly use her Ask The Host lifeline to ask Clarkson a very simple question: Which is the UK’s longest motorway?

Like Ronni, you’d assume someone who spends his entire life in cars, had driven up and down all four options myriad times, and purports to be a world expert in all things vehicle-related, might know such a rudimentary fact. Even I knew it!

But Clarkson got it wrong, saying the M1 rather than the M6. ‘I’m ashamed,’ he squirmed, having humiliated himself considerably worse than me.

As Sun Tzu also said: ‘The greatest victory is that which requires no battle.’

On the subject of victories, Good Morning Britain is officially the most talked-about TV show in Britain. Twitter announced that we attracted the biggest response in 2020, prompting more than 6.1 million tweets and beating ‘rivals’ including Channel 4 News, Love Island and Question Time.

All this noise drove our ratings up by over 30 per cent year on year, to an all-time high and the closest-ever gap with BBC Breakfast. So, to all those who wonder why I spend so much time yapping on Twitter, often to even my own intense irritation, that’s why.

I’m not really into making New Year’s resolutions, and especially not today because I find the notion of doing Veganuary and Dry January particularly preposterous during another lockdown.

Instead, I posted an Instagram meme featuring Leonardo DiCaprio in The Wolf Of Wall Street smirking with a glass of champagne and saying: ‘No “New Year, New Me” here – I’ll be the same honest a**hole at 12.01 that I was at 11.59.’

But I accept that for some, resolutions can be genuinely life-changing. My ITV breakfast show predecessor Eamonn Holmes and I are now good friends, but we fell out badly 20 years ago when I was editor of the Daily Mirror and published photos of him looking very overweight as he played golf, under the headline: ‘TELLY-TUBBY!’ 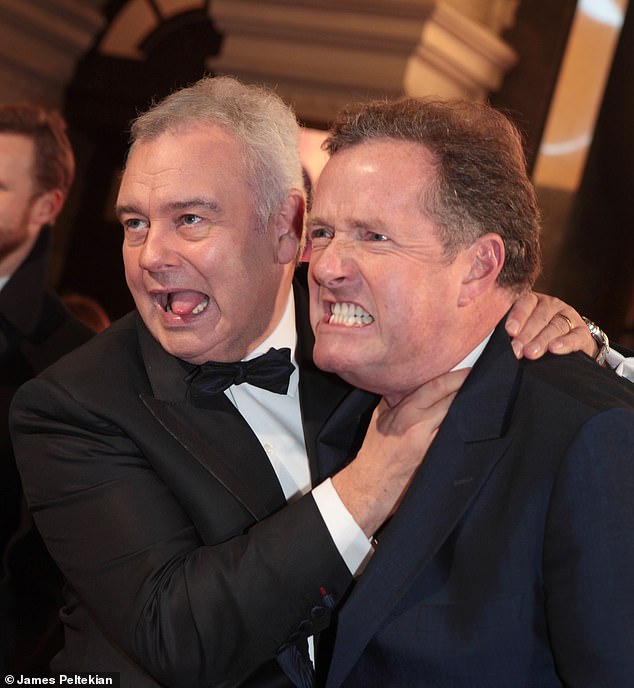 My ITV breakfast show predecessor Eamonn Holmes and I are now good friends, but we fell out badly 20 years ago when I was editor of the Daily Mirror

To his great credit, Eamonn has since dropped from 18st to 15st through juicing, fasting, walking and Pilates after making a New Year’s resolution five years ago to get slimmer and healthier.

Explaining eating habits at the time, he said: ‘You have a bowl of corn flakes at 4am, get to work and have a bacon roll, then eat something on air like a doughnut, then you finish at 9am and someone says, “You fancy some breakfast?” Then you have elevenses and you’ve had six or seven meals before lunch. You are running on adrenaline from arguing with politicians, but your cortisol is all off.’

I can totally relate to this. My own Good Morning Britain day regime is usually porridge and honey at 5.30am, Marmite on toast at 7.30am, eggs and something when I get home at 9.15am, possibly another sandwich snack at 11am, and a hearty lunch at 12.30pm before attacking the biscuit tin in the afternoon, until my wife Celia locks it away.

By 5pm I’m slumped on the sofa like a zombie waiting for dinner.

(All the caffeine doesn’t help; a viewer tweeted me today to ask how much tea I drink during a show as he’d noticed an array of mugs on the desk. I checked with India, the hard-working young lady who keeps all GMB presenters fed and watered on air, and she said I have seven mugs of tea while Susanna has TEN mugs of tea and black coffee. And that’s just what we consume before 9am!)

As a result, I now weigh 16 stone, a stone more than when I started at GMB, and the former ‘Telly-Tubby’ has gone from being the object of my merciless fat-mockery to my fitness role model.

So my resolution is to weigh the same as Eamonn Holmes by the end of 2021.

I once asked Donald Trump why he never drank alcohol and he told me: ‘I’ve seen it destroy people. I was with someone the other day who was a very respected banker. And we had to carry him out of the dinner because he was so drunk. You just lose respect when that happens. I’ve seen too many people like that. None of them can stop, it’s unbelievable to watch.’

I thought of this as I watched the disgraceful scenes at the US Capitol building last night when deranged Trump thugs stormed the Senate to ‘STOP THE STEAL!’ of an election that their hero lost fair and square.

As US President, Donald Trump got drunk on a different kind of stimulant: power and abusing his power. It destroyed him.