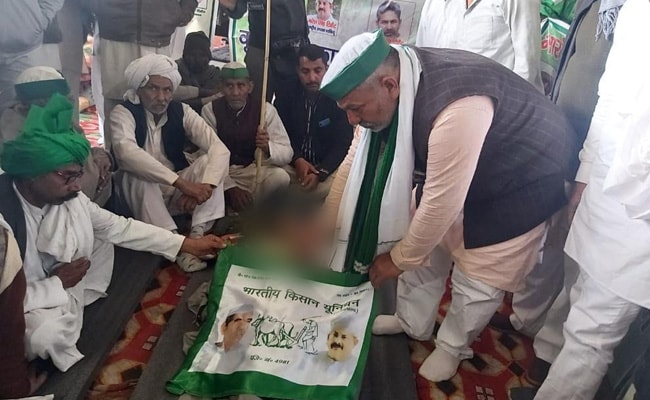 A 57-year-old farmer on Friday died while protesting at the Delhi-Uttar Pradesh border against the three contentious agriculture laws enacted by the centre last year. According to local authorities, the farmer appears to have died from Hypothermia — a life-threatening condition in which the body temperature suddenly drops — triggered by the cold wave that has gripped the national capital and its surrounding areas.

“Prima facie, it seems that he died due to Hypothermia but we couldn’t do a detailed investigation as the farmers refused to allow a post-mortem examination,” the office of the chief medical officer, Ghaziabad, told NDTV.

The farmer has been identified as Galtan Singh of UP’s Baghpat district. He had been protesting along with other farmers at the Ghazipur border.

“Another protesting farmer today died because of the government’s ego. Today, 57-year-old Galtan Singh, son of Mohar Singh, died because of a heart attack triggered by the cold conditions. So far, 46 farmers have died protesting (the laws), but the government has no shame — soon its arrogance will end. Farmers will not hesitate from sacrificing their lives for this movement,” the protesting farmers said in a statement.

Farmers from Punjab, Haryana, Uttar Pradesh and several states have been protesting the three laws in and around the national capital for weeks. They fear the laws will result in the edging out of the traditional crop markets, which will lead to their exploitation. They also allege that by these laws, the centre wants to scrap the minimum support price guarantee.

The government, however, says the laws are not aimed at ending the existing system but providing better avenues to farmers to sell their crops. It also claims the laws will eliminate the role of middlemen.

The centre and the protesting farmers on Wednesday held the sixth round of talks. Union Agriculture Minister Narendra Singh Tomar later said the meeting “concluded on a very good note” and there was agreement on two of the four demands made by the farmers.

A joint front of 40 farmers’ unions that is leading the protests has today warned that it will intensify the agitation if their demands of a repeal of the three laws and giving legal status to MSP are not fulfilled at the next round of meeting, scheduled on January 4.