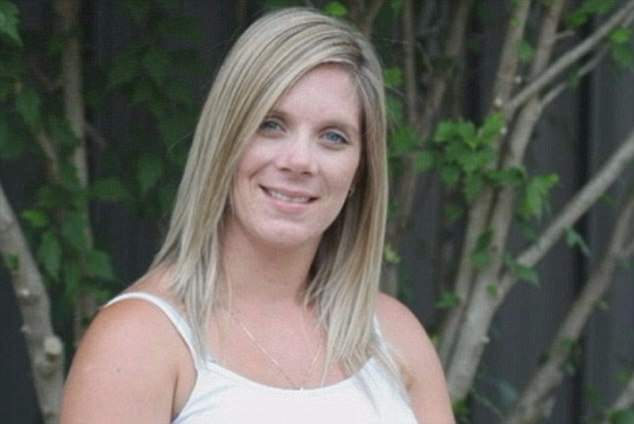 After being beat up, a savage murderer killed his ex-girlfriend while she was carrying her eight day-old daughter.

He was assaulted at the Alexander Maconochie Centre, Canberra, where he is currently serving a 32 year sentence.

Marcus Rappel (pictured), 43. Murdered mother of three Tara Costigan (28) in February 2015. In front of her two sons aged nine and 11, in front of her children.

Tara Costigan (pictured), 28 was attacked in the neck while she was holding her daughter, Tara Costigan, and in front her sons, who were nine and eleven years old at the time.

After the attack at 6 p.m. on April 19, the murderer suffered facial swelling but was not admitted to hospital.

A spokesperson for Justice and Community Safety Directorate stated that although custodial staff did not observe the incident, staff made contact with health personnel as soon as they became aware.

“Following assessment, the detainee remained in the Alexander Maconochie Centre. Normal procedures were followed and the incident was promptly resolved.

ACT Corrective Services has taken all necessary precautions to ensure that the detainee is safe after such incidents.

ACT Policing is currently investigating the incident. According to a spokesperson, no charges have been filed at the moment, but the investigation is ongoing.

Ms. Costigan was shot and killed one day after she applied for an interim domestic violence injunction against Rappel, and one week after giving birth to their daughter.

Marcus Rappel (43), was sentenced to 32 year imprisonment after he killed his ex-partner using an axe as he held their newborn daughter, eight days old, while incarcerated.

Ms. Costigan, 28 years old, was murdered just days after she applied for an interim domestic violence or against Rappel. (pictured together).

Ms. Costigan was nursing her baby daughter when Rappel broke into her Canberra home. In terror, she fled to the laundry and was then struck in the neck.

The court heard from Rappel that their relationship was over and that Rappel had become more abusive during a September 2016 sentencing hearing.

Rappel stated in his evidence that ‘the love was gone and the trust was gone’. It was doomed.

He was angry at not being there for his daughter’s birth, and he wanted to reclaim furniture that belonged to him.

Rappel broke into Ms Costigan’s home while she was nursing her baby girl. She ran in terror to the laundry, but she was not fast enough.

Rappel struck her in the neck, and she fell face-first on the ground as she held her newborn child.

Ms Costigan’s sister Nikkie and her partner, both of whom were present at the house at that time, suffered injuries in the attack.

Ms Schmidt’s partner managed to take the axe out of Mr Rappel’s hand and a neighbor was able to restrain him till police arrived.

Rappel was sentenced for murder, violating a domestic violence order, and two counts each of assault.

After shouting at Justice John Burns, Rappel was forced to be restrained after he was sentenced to a February 2013 trial.

Trish Fuller, Ms Costigan’s mother, said that no sentence would be good enough.

She cried sobs outside the courtroom, saying that “(It] should have been forever.”

“Whatever he did, it is not going to bring her back. This has been absolutely devastating.”

“Many people have said that today will bring closure. It hasn’t. Today’s verdict doesn’t bring me peace. He said that Tara is still dead to reporters outside the court.

Rappel was told by Justice Burns that the ruthless murder was a ‘vicious, cowardly’ crime and would be felt for ‘decades to come’, according to the ABC.

He said, “Those who witnessed your violence must live with their memories for their entire lives.”

“Your actions have deprived three children, including your infant daughter, of their mother.”

Justice Burns stated that Rappel was motivated by the murder of Ms Costigan because she had applied for an AVO.

After Rappel’s sentence, Rikki Schmidt is hugged outside by her family.