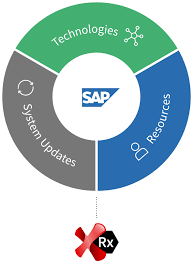 Regular updates of SAP has made testing mandatory. However, many enterprises still use manual testing approaches that cause delays and expose your business risks. One of the main reason for this is low confidence in test automation. According to recently published survey conducted among SAP users, 45% of respondents were concerned about lack of automated testing in SAP while most respondents were unaware of the risks related to manual testing approach.

In this article, we’ll discuss common barriers to SAP test automation. But before that, let’s discuss why SAP testing is mandatory during SAP implementation, SAP ECC to S/4HANA migration and post migration/ implementation.

Why SAP testing is mandatory?

Due to non-testing or insufficient testing bugs can leaked into production. If a bugs go undetected in the production of any SAP module, the consequences can be disastrous.This can be understood by following examples.

In 2018,German brand Haribo, kicked off a major SAP S/4HANA migration. However, the migration wasn’t as smooth as anticipated and lead to 25% decline in sales for 2018. Prime reason for migration failure was business processes were broken and incompatible.

In 2017, Revlon implemented S/4 HANA in their largest plant in South Carolina. The project ran into severe delays because of which they were unable to fulfil the US federal, state, and local financial reporting deadlines. Many enterprises like Revlon are implementing S/4HANA but don’t understand that change management maturity is critical to success. In fact, businesses that don’t bake change management into their SAP S/4HANA plans will more than likely fail.

Build time:As per ASUG Survey Reports, 72% respondents reported their concern about time required to build test automation. Most test automation platforms are developed with programmer mind-set. It means that coding is required to create automation. However, to create SAP test cases, you not only need manual testers but also functional consultants as they are the ones who know their day-to-day business processes best. Both have non-programming background and struggle to work with code-based test automation platform. In case, the programmers are aligned with business users, it’ll unnecessary stretch the testing cycles, leading to more consumption of time and cost.

Maintenance: According to a recently published survey, more than 70 percent of respondents are concerned with test maintenance. Regardless of, how reusable components are available, testers need to writing a lot of similar code again. Apart from this, many test automation platforms use locators to capture control on the screen. Since, SAP components are highly dynamic in nature, a slight change in the UI lead to test failures. Since you cannot reuse scripts over and over again, you’re not getting the true value of automation.

Risk Coverage:In case of SAP, most customers are relying on manual testing. Some customers that use SAP automated testing are not using to its full potential. The reason being test engineers select smoke/regression tests cases based ontheir experience or on the basis ofguess. It exposes your business to unnecessary risks.