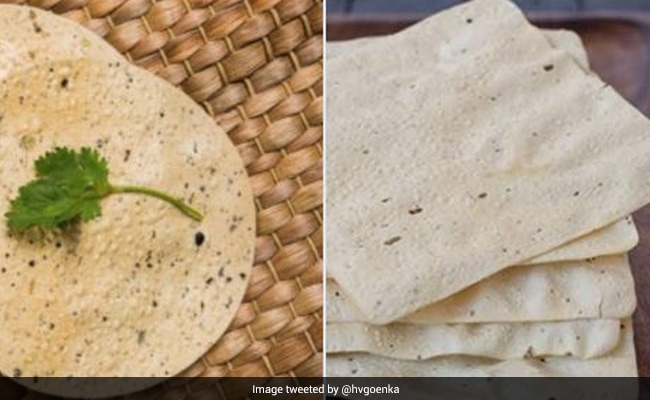 Papad, whatever its shape or name, is exempted from GST, the government’s indirect taxation agency clarified today after a social media post claimed that a round papad is exempted from the tax while a square variant attracts it.

The social media post had pictures of round and flat papads placed next to each other. Sharing the post, Harsh Goenka, chairman of RPG Group, tweeted, “Did you know that a round papad is exempt from GST and a square papad attracts GST ? Can anyone suggest a good chartered accountant who can make me understand the logic?”

In reply to some queries on how he got this information, Mr Goenka said a friend had told him.

Responding to the post, the Central Board of Indirect Taxes and Customs, which is responsible for indirect taxation in the country, clarified through its official handle, “Papad, by whatever name known, is exempt from GST vide Entry No. 96 of GST notification No.2/2017-CT(R). This entry does not distinguish based on the shape of papad. This notification is available at http://cbic.gov.in.”

The Goods and Services Tax or GST was implemented in July 2017 and it subsumed all the central excise duties and local levies. GST is a destination based tax on consumption of goods and services.

The GST is applicable on all goods and services except on alcoholic beverages and petroleum products.