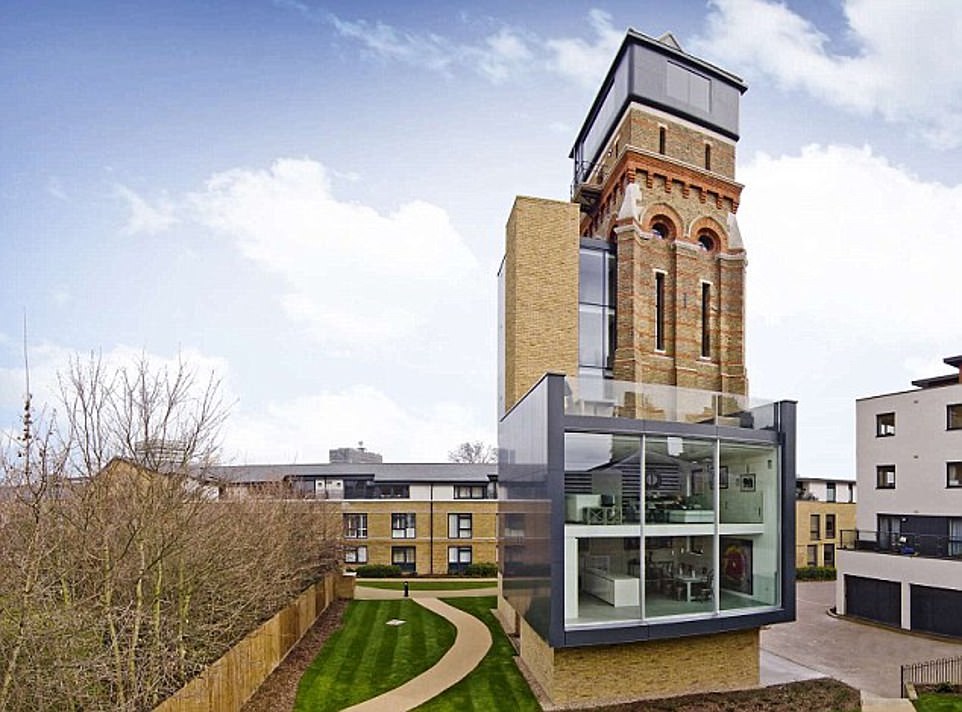 Do you remember the episode of Grand Designs when a South London water tower was converted into a family home?

The episode saw a couple buy a Grade II listed building in Kennington for £380,000 – and then spent almost £2million converting it from a crumbling ruin into a family home.

Well, if you have ever thought ‘I would love to live in a building like that but I wouldn’t want the hassle of converting it’, we may have found a solution – in the shape of three finished water tower conversions for sale. 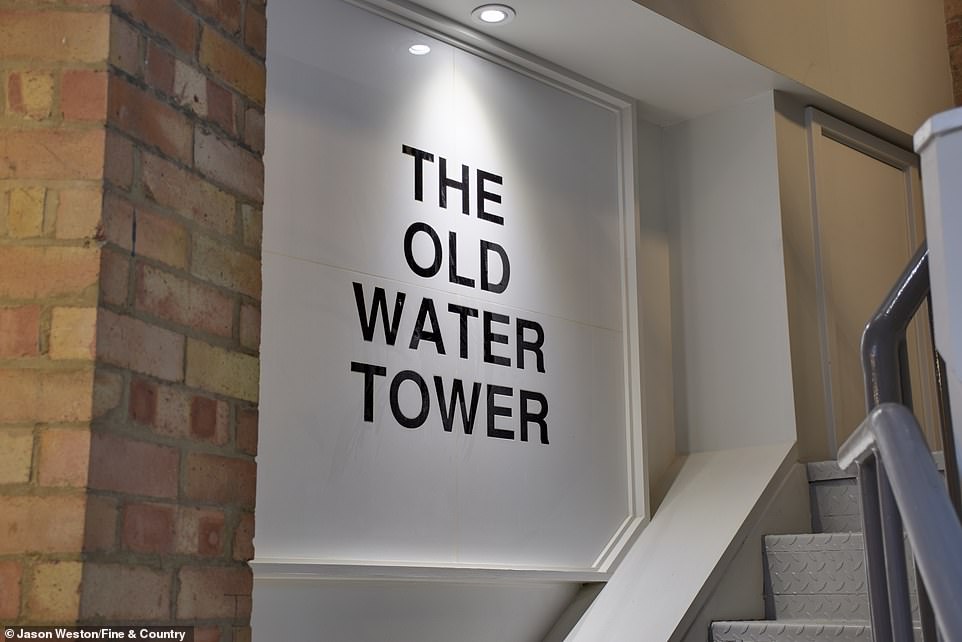 We pick three luxury converted water towers that are on the market and range in price from £1.25million to £1.4million

While the water towers for sale may be ready to move into and avoid all the hassle of converting them into family homes, they all still have an expensive price tag.

They are all valued at between £1.25million and £1.4million, and are located in Warwickshire, Colchester, and West Sussex.

We take a look inside each of the three converted water towers for sale on the property website OnTheMarket. 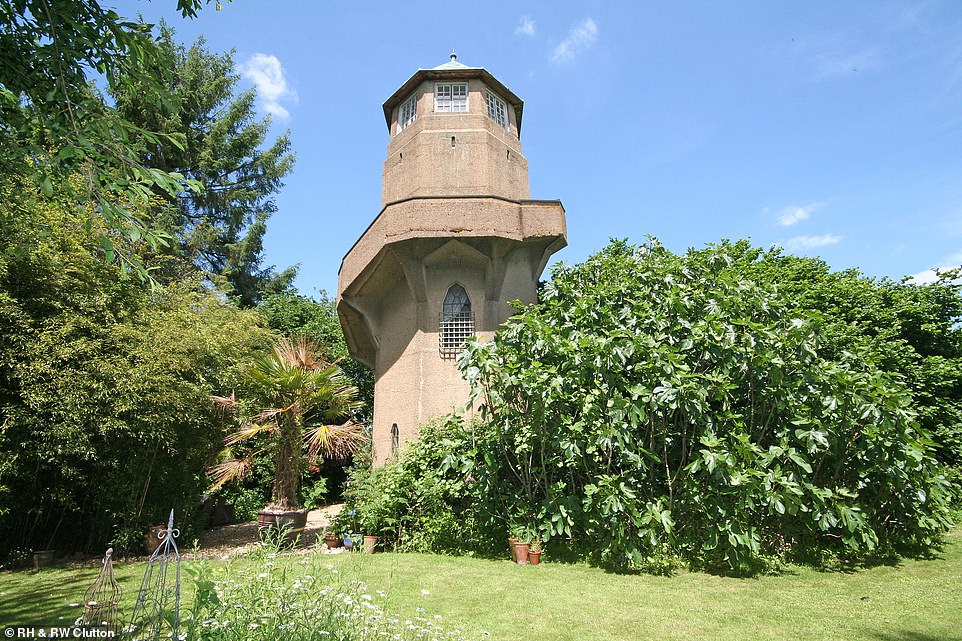 This water tower in Steyning, West Sussex, was designed by Maxwell Ayrton – the architect who designed the original Twin Towers at Wembley Stadium 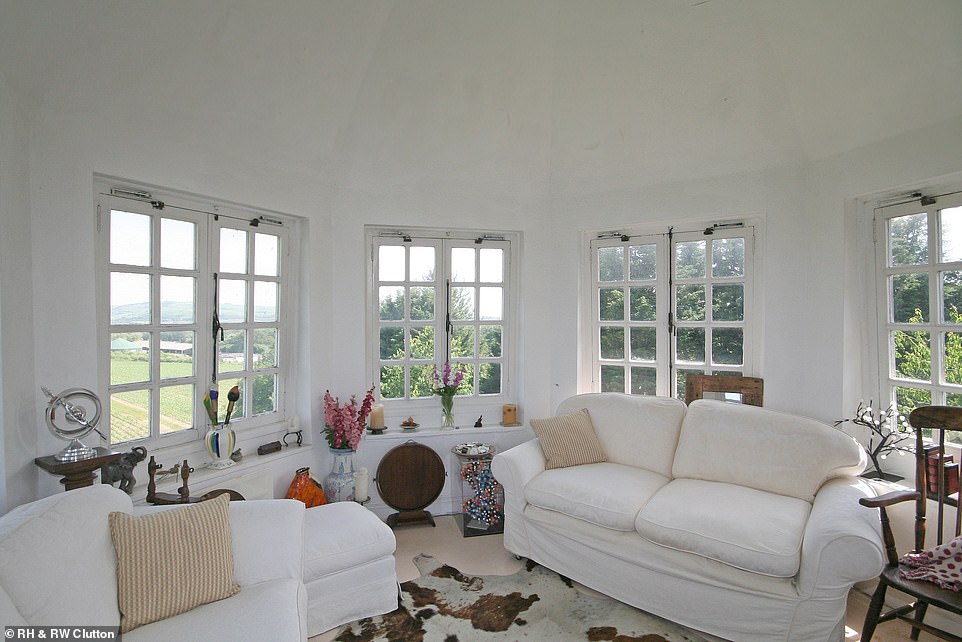 The tower was built in about 1930 for Sir Arthur Howard as part of the Wappingthorn Estate, which the living room overlooks 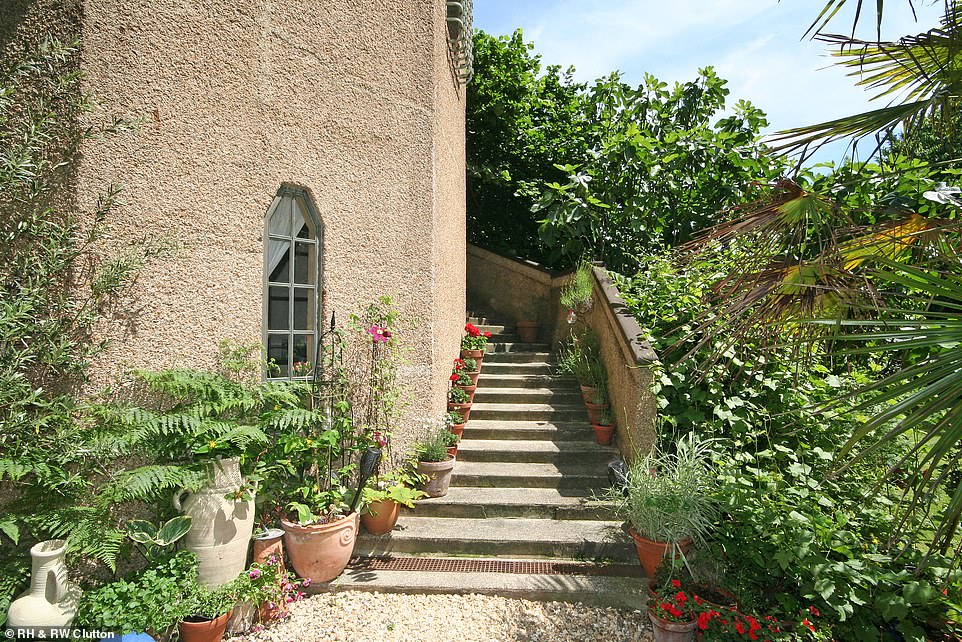 This unusual and octagonal Grade II listed tower was designed by Maxwell Ayrton, the architect who designed the original Twin Towers at Wembley Stadium.

The tower was built in about 1930 for Sir Arthur Howard as part of the Wappingthorn Estate and is constructed of reinforced concrete with a gently rising ‘helter skelter’ external staircase that wraps around the tower, providing far-reaching rural views as it rises up the building.

The water tower is approached via a private lane that runs through the Wappingthorn Estate, in West Sussex’s Steyning.

Helen Whiteley, of OnTheMarket.com, said: ‘This four-bedroom former water tower is potentially one of the most visually striking properties we have seen come to market in recent months thanks to its concrete exterior and ‘helter-skelter’ staircase.

‘Being located in a peaceful, rural location just north of the South Downs also makes this home very desirable for those looking to make their next move to a home with lots of outdoor space.’

The property has four bedrooms and is on the market via RH & RW Clutton estate agents with a price tag of £1.35million. 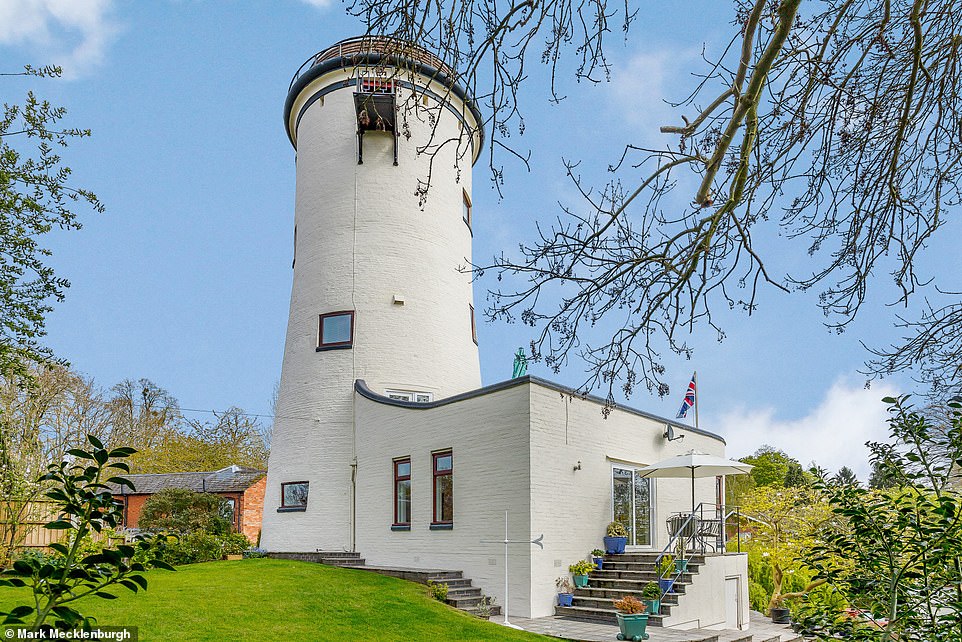 This water tower in Kenilworth, Warwickshire, is thought to have been originally built as a windmill in the middle of the eighteenth century 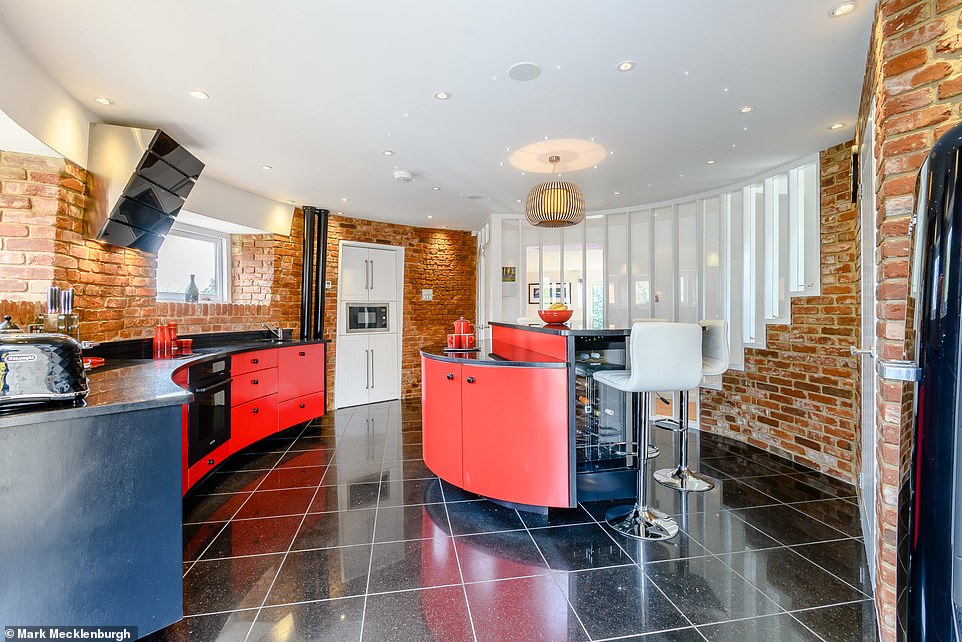 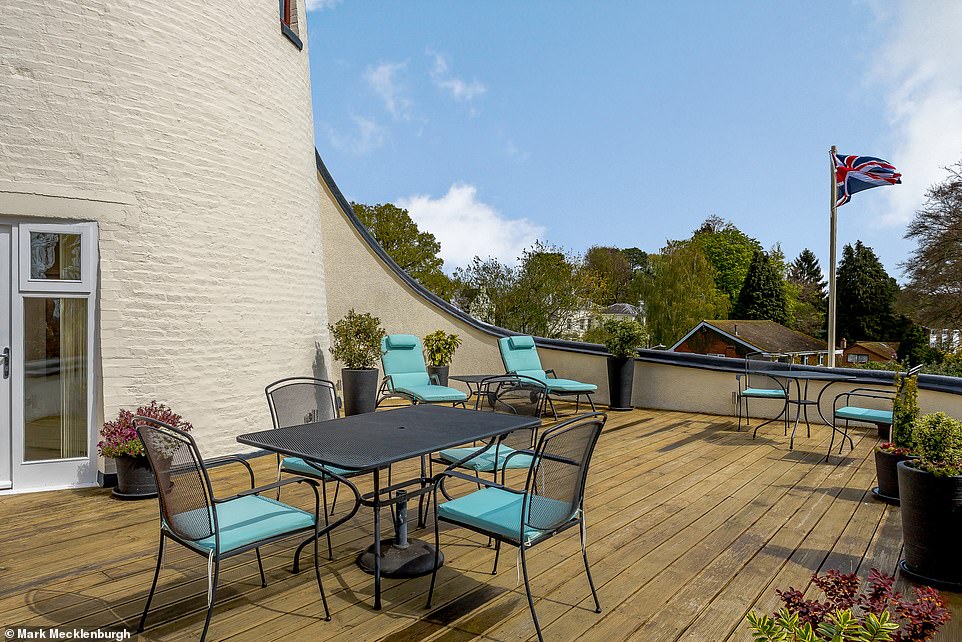 This water tower in Kenilworth, Warwickshire, can be seen from miles around and is thought to have been originally built as a windmill in the middle of the eighteenth century, and then converted into a water tower in 1885.

The property has a bespoke fitted circular kitchen and living area, four double bedrooms, a study and a family bathroom.

There is also a large sun terrace on the first floor and a balcony on the fifth floor that boasts views across Kenilworth and Warwickshire.

It sits on a third of an acre and comes with a garage and parking for six cars. It is being sold via estate agents Fine & Country for £1.4million.

Ms Whiteley, of OnTheMarket.com, said: ‘This iconic property delivers on all the elements of many buyers’ wish lists, a rich history, peaceful location, generous outdoor space, and modern interior.

‘The statement kitchen and immaculate neutral décor offer the next buyer the ability to ‘move in and go’, which is rare in period and character properties, and will no doubt ensure it generates a lot of interest.’ 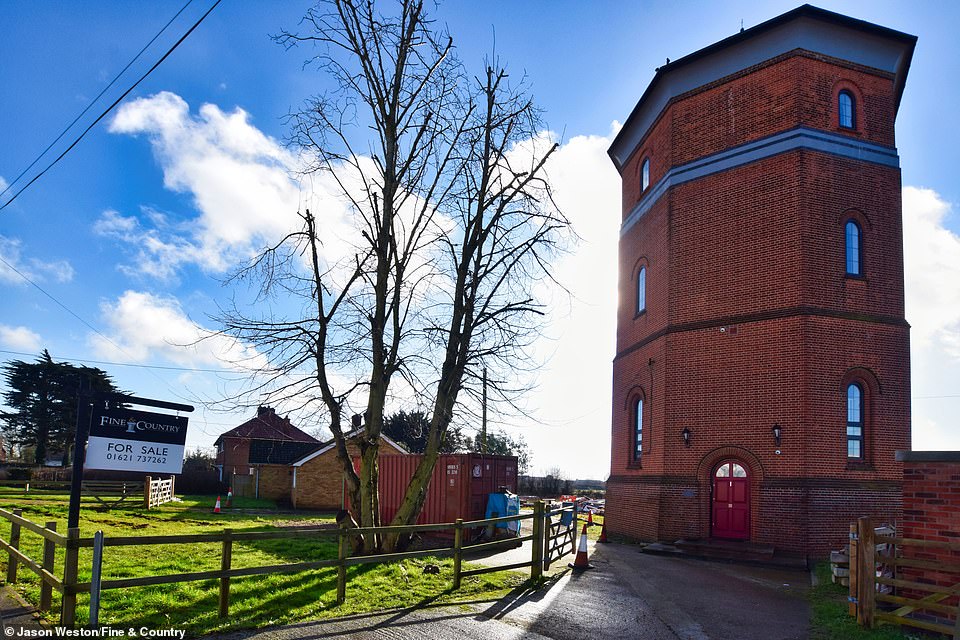 This water tower is on the outer edge of the village of Tiptree in Colchester and is on the market or £1.25million 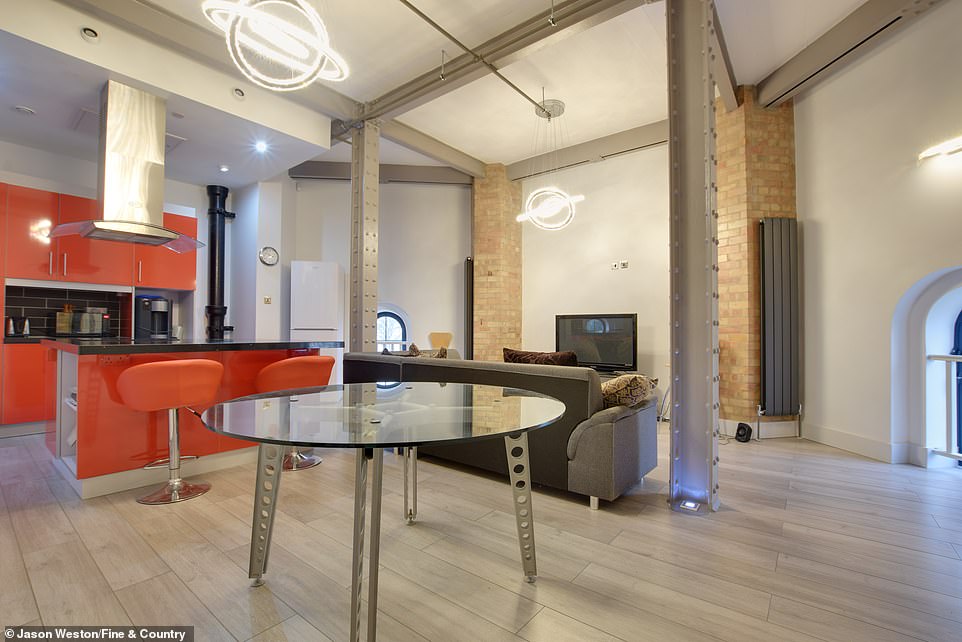 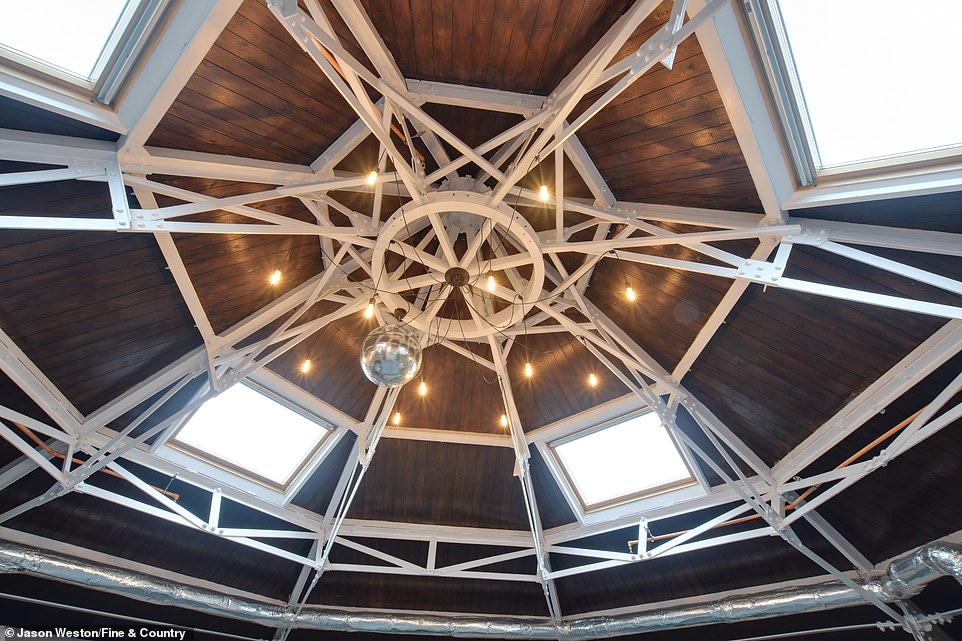 This water tower is on the outer edge of the village of Tiptree in Colchester and is the least expensive on our list with a price tag of £1.25million. It is being sold via Fine & Country.

The property has two bedrooms and a bathroom on the ground floor, a kitchen on the first, a living room on the second and a main bedroom with an ensuite and dressing room on the top floor. The stairs continue into a loft room with skylights.

Ms Whiteley said: ‘It’s not often that we see properties as unique as this one come to market, so to see more than one historic water tower become available during the current market is quite something.

‘The Old Water Tower in Tiptree beautifully marries the old and the new as behind the original façade of the property lies a well-designed interior perfect for modern living in a home with already existing character.’