Right To Vote Must Be Respected

This woman will change how you exercise for ever 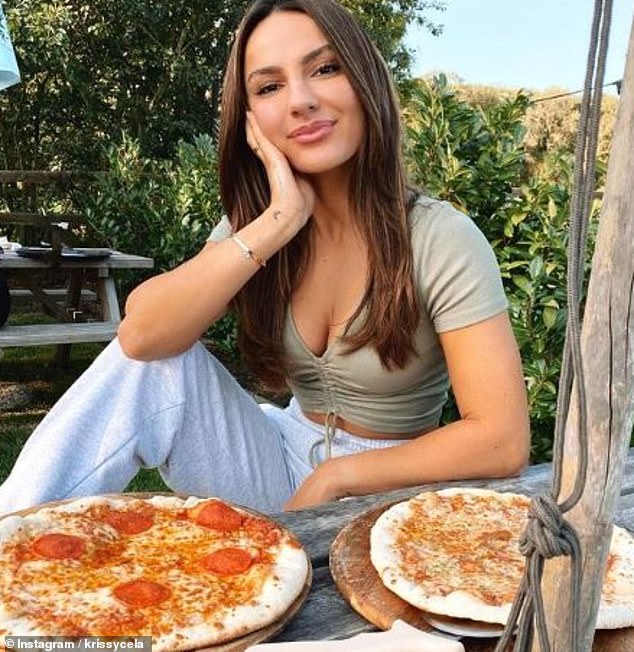 How did Krissy Cela go from being terrified of the gym to a prolific fitness influencer with over two million followers? By turning every exercise ‘rule’ on its head. Natasha Poliszczuk meets the one-woman fitness revolution who says that if she can fall in love with working out, anyone can

Krissy Cela says it herself: on social media, people tend to see ‘the final picture and not the journey or the individual behind it’. Which is why, on the face of it, 26-year-old Cela (pronounced Che-la) could easily be defined by her long, glossy hair, big smile and – let’s not beat around the bush – almost preternaturally toned body. She posts weekly workouts online (@krissycela), to the delight of her 2.3 million Instagram followers, who she calls her ‘familia’.

She is well on her way to becoming the female Joe Wicks. Social media aside, in the past year her Tone & Sculpt app has had over 400,000 downloads. Its users have completed a mind-boggling 2.6 million workouts to date – 354,000 in its most successful month. In September, she launched a range of sportswear with Oner Active that sold out in under an hour. Her rise is on such an upwards trajectory, it is meteoric. So far, so predictable… and so unrelatable. Right?

Wrong. Krissy is no ordinary fitness influencer. She started out almost by accident: posting on Instagram to check that she – a total novice – was doing exercises correctly. At the time she was working a 30-hour week at a restaurant to put herself through her law degree (which, incidentally, she saw through to the end, even after things took off on Instagram). She came from a small, close-knit family who – although Krissy sounds as English as tea and toast – moved over from Albania for a better life when she was four. She spoke no English, but, she shrugs, children adapt quickly.

She doesn’t even consider herself an influencer, more your friendly personal trainer, and the ‘familia’ aren’t her acolytes, they’re a community, cheering each other on. She doesn’t work out every day – ‘two days a week; maybe three’ – and has to compel herself to do it: ‘Do I want to go to the gym? Hell, no. I’d rather chill on the sofa with my dog Buttons.’ Nor does she swear by a strict diet: she loves pizza and chocolate. And the first time she walked into a gym she was so terrified she walked right back out again.

In fact, Krissy is the antithesis of the terrifying, unattainably toned personal trainer cliché, who shouts at you to keep pushing through the pain when you’re about to keel over. She is smiley and more like your (much fitter) friend who chivvies you along. She lives quietly just north of London with Buttons, still has the same best friend she did pre-fame, and while she won’t say whether or not she is single (her ex-fiancé Jack Bullimore remains her business partner for the Tone & Sculpt app), says with a broad grin that she is ‘very happy’. But that could be down to Buttons. Or perhaps it’s her quietly revolutionary approach to fitness, which asks us to re-evaluate everything we think – and possibly fear – about exercise.

Yes, you can eat carbs! ‘Food is not your enemy,’ says Krissy

It all started when Krissy was desperately unhappy. She was living away from her family, trying to study in between full-time hours at the restaurant, and heartbroken after a break-up. ‘I will never forget that feeling – like I wasn’t good enough. I found myself spiralling into such a dark place, depressed and unhappy with life. I was constantly trying to do things for someone else to make them notice me, but nothing for myself.’

Desperate for something to make her feel better, Krissy reluctantly turned to the gym. (She really isn’t a born sportswoman: at school she point-blank refused to do the cross country run.) ‘I signed up to the gym, walked in – and walked straight back out again. I didn’t return for two months, and when I did, I felt clueless. I nearly gave up, but then I realised that taking control of my physical and mental health was something I could do for me. This is true for all women – I hear it time and time again,’ she adds emphatically. ‘Women are mothers, sisters, carers, workers – and constantly putting other people first. We never take a moment to sit back and think, “I’m going to do something for myself and not feel guilty about it”. When do you do that? Never, I’ll bet.’

This is why she’s called her first book Do This For You: How to Be a Strong Woman From the Inside Out, because she’s on a mission. The holy trinity of fitness, healthy eating and exercise saved her – and it can help you, too. ‘I want women to read it and think, “If she can do it, what’s stopping me?” I’ve been through all the same things: heartbreak, depression, anxiety. I get it. Every excuse you make to avoid exercising, I’ve made, too. I’ve been there.

‘Every woman deserves to feel great, which starts with their mindset. And this isn’t just for 18-year-olds – we have 40, 50, 60-plus women who are all coming together to do this for themselves. Because what’s more important than your physical and mental health? We live in a society that tells women they have to look a certain way, be a certain dress size, behave a certain way. I want to change that, question the status quo and reframe how you think about exercise.’

Krissy really does get it. She’s tried teas, quick fixes, restricted-calorie diets, cutting food groups: ‘All that madness,’ she shudders. ‘What was I thinking?’ She’d been motivated by the pursuit of what she wanted to see (a ‘curvy, desirable body’) rather than what she wanted to feel – happier, healthier and more balanced.

She knows how intimidating gyms can be. She has messages from thousands of women saying they find them scary, elitist male-dominated places, filled with machines they don’t understand. ‘I want to make exercise inclusive and accessible to everyone. I can’t give you a magic pill, but I can give you a method. What works is longevity, discipline, habit and control.’

If you were starting to get on board, but are now suddenly thinking, ‘Hold on – that sounds a little scary, too. I’m pressed for time as it is…’ Don’t! Stick with Krissy. Because what comes next is a breath of fresh air.

‘You don’t have to be in the gym every day or for hours on end. You can do a great workout at home in 15 minutes while you’re waiting for dinner to cook. Fitness isn’t meant to be a chore. And you don’t have to compete with yourself or anyone else.’

The problem is with our ingrained mindset, which makes us fearful of exercise. ‘I hear it a lot from women over 40, because they’ve grown up thinking that carbs are the enemy, they have to do cardio and “feel the burn” and that you work out to be a certain dress size. But I’m saying you can enjoy the food you love; you don’t have to hit the cross-trainer or lift weights or work out every single day. Take your time: the more pressure you put on yourself, the more you’ll resent it. Your wellbeing isn’t optional, it’s the foundation of who you are. 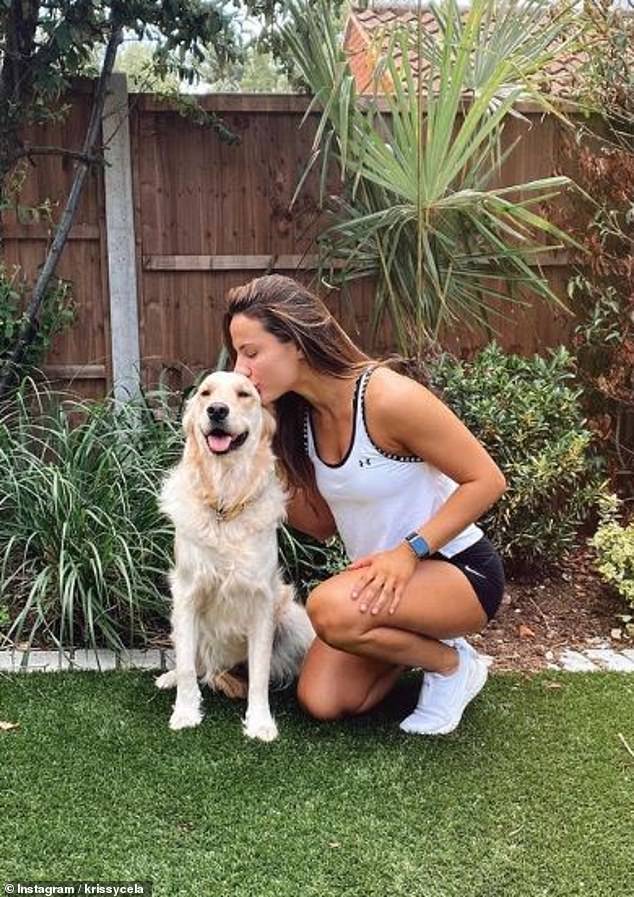 With her favourite walking buddy Buttons

‘A client who is in her 50s told me, “You’re saying the opposite to what I’ve thought for the past 30 years! Why hasn’t anyone told me this before? Will it actually work?” But the results are there – you can see them.’

You can. Krissy’s Instagram feed is full of before-and-after pictures from grinning, grateful women who have discovered that exercise has transformed not only their bodies, but their minds: ‘I was in a downward spiral…’ writes one. ‘It’s given me confidence and built my physical – as well as mental – strength.’ Krissy mentions women who have experienced trauma. Others who couldn’t climb the stairs without puffing. They have transformed their lives: ‘There’s always one common factor: they want to make a change.’

All you need to start, says Krissy, is to find your ‘why’ – and this should run deeper than ‘I want to drop a dress size’. Everyone’s different. Take Krissy’s mum Mirela, 56, who overcame cancer last year and, having been a size 10 all her life, is currently a size 16-18. ‘She’s not happy so I sat her down and asked what her “why” really is, because it’s not just about losing weight. She admitted she wants to go on a walk without wheezing and get her energy back. It’s the same for a lot of women: it goes far deeper than the way they look.’ 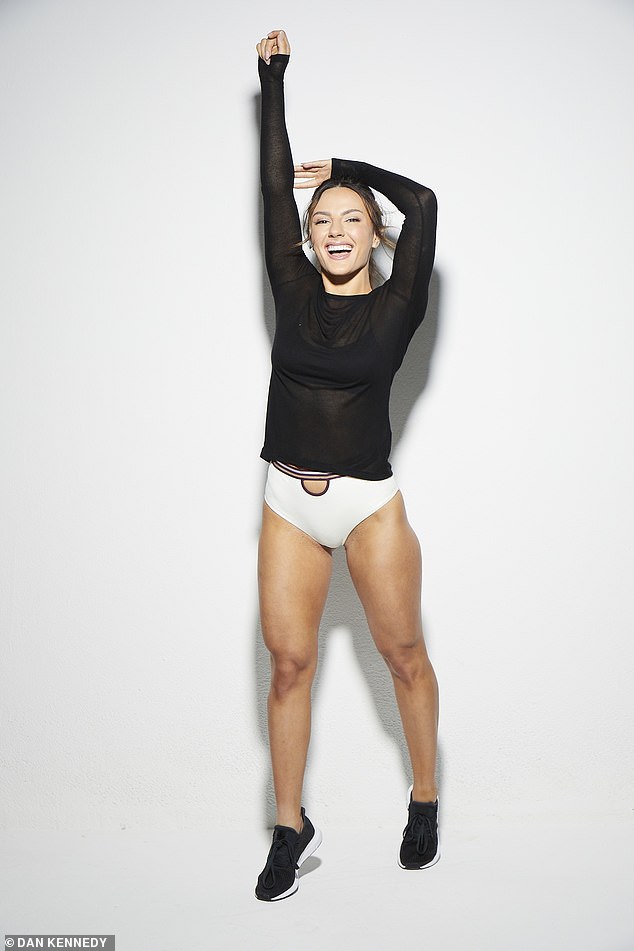 Mind you, Krissy’s mum doesn’t see the point of gyms. ‘She’s old school!’ Krissy laughs. ‘She asks why I’m lifting iron when I’m a woman! But she also thinks a woman should be open-minded and always taught me to speak my mind and be myself. She says you have to be strong inside because your self-esteem comes from you.’

Fortunately, Krissy has the answer: ‘If you aim to be active for half an hour, three times a week, and go on a nice walk in between, that’s great. I don’t train every day.’ And if you just want to sit down and eat biscuits? ‘Of course there will be days like that! Everyone’s motivation comes and goes. But it’s totally fine because there’s always tomorrow.

‘Be kind to yourself and give yourself time and patience. This is about forming good habits that slowly build you into the person you want to be. Moving your body helps your mind and your happiness – it’s the most rewarding thing you can do for yourself.’

Don’t miss Krissy’s exclusive 30-minute at-home workout in next week’s YOU. It’s so easy – anyone can do it!

Getting your finances in order to buy a home can be tough enough at the best of times. But in the midst of...
Read more
- Advertisement -