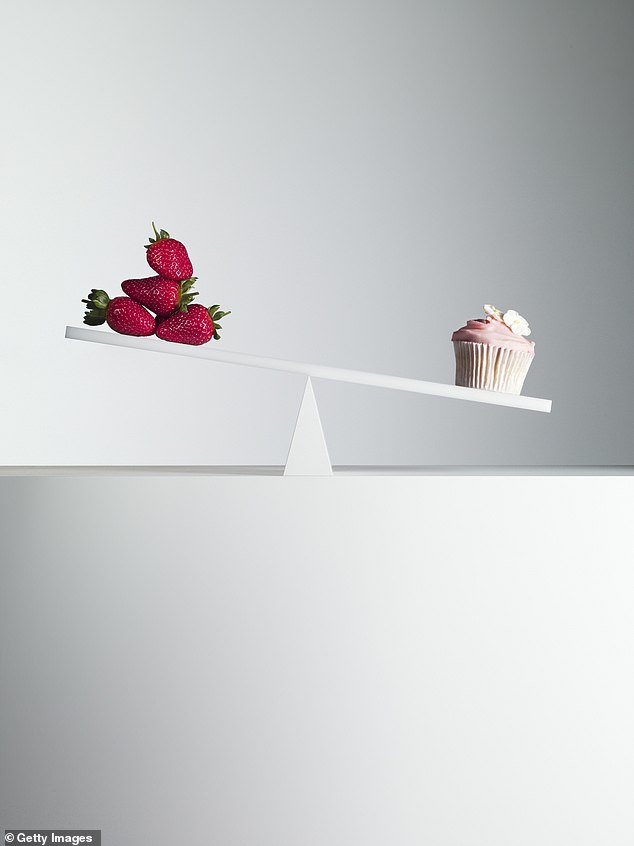 We all know that eating fewer calories will help us lose weight. But most of us don’t know that what really counts is how our bodies use this energy, as Jo Macfarlane discovers

‘Consume fewer calories, we’re told, and we’ll lose weight. While this remains true, the problem is that it’s not the full story. The flaw is that not all calories are equal.’

On one hand, a two-finger KitKat. In the other, a small handful of nuts. Both contain roughly 100 calories. Which would you choose if you were trying to lose weight? Does it even matter? That is the thorny question at the centre of the whole notion of calories – those numerical measures of energy that feature on the nutritional labels of everything from tinned soup to loaves of bread. Calorie counts are a legal requirement on pre-packaged food and drink, designed to help us make healthier eating choices and stay within our recommended daily limits – currently 2,000 for women and 2,500 for men.

From next April, thanks to the Government’s obesity strategy, many cafés, restaurants and takeaways will be forced to display calorie information relating to every food and drink item they sell. On the surface, it makes sense. Many of our most devastating diseases are linked to poor diets, and the bottom line is we eat too much. Evidence shows that displaying calorie content can help us to think more wisely about what, and how much, we eat.

Consume fewer calories, we’re told, and we’ll lose weight. While this remains true, the problem is that it’s not the full story. The flaw is that not all calories are equal. But with so many diets around – from the popular Noom weight-loss app, which uses a traffic light system to ‘rank’ foods according to calorie content, to the intermittent fasting trend, which tells us that when we eat is just as important as what we eat – it’s little wonder that we’re confused, or that around 95 per cent of diets fail.

So what does the basic science tell us? And can we really trust the calorie counts on packaging? The answer to the latter is a firm no, according to one of the country’s leading experts in this field. Dr Giles Yeo, who is an obesity specialist at the University of Cambridge’s Wellcome-MRC Institute of Metabolic Science, says that while calorie counts are useful, they’re not the full story. If we only look at calorie content, we ignore not just the source of those calories, but the way the body metabolises and digests the food we’re eating.

The important question, Dr Yeo explains, is ‘not “how many calories does this contain?”, but “how many calories from this can my body use?” Most people have no idea that the calorie counts you see everywhere are wrong,’ he says. ‘No one is lying or making up numbers. But we don’t eat calories – we eat food from which our body extracts calories. The process of digestion and metabolism itself uses up energy and calories, which varies according to what you’re eating. So it’s the number left over from the total you see on the packet that matters most.’

Vegan burgers and oat milk are far less healthy than we think they are.

This is the real calorific value of a food – a concept called ‘caloric availability’ – and you won’t see that on any food labels. It’s not impossible to add it, Dr Yeo says, because we already know the caloric availability of each of the main components of our food – protein, fat and carbohydrates. Once you understand the concept, you can see that where our calories come from really does matter.

A calorie of protein, for example, whether from meat, fish, eggs, beans or tofu, will make you feel fuller than a calorie of fat or carbohydrates because of the way it’s digested in the body. Protein travels further down the gut before it is digested and absorbed. This triggers the release of gut hormones which send signals to the brain telling us we’re full. Protein is also more chemically complex than fat or carbs, so it takes more energy to metabolise it. As a result, if we eat 100 calories of protein, scientists know that our bodies will use up roughly 30 calories processing it, leaving 70 available for other purposes. This is partly why high-protein diets – such as the Atkins or Keto plans – work in helping us lose weight. And it’s why a handful of nuts will trump a KitKat every time, if we want to lose weight and stay healthy.

The same amount of fat, on the other hand, will leave us with 98 calories after digestion, while carbs vary from 90 to 95, depending on whether they’re refined, such as white bread and pasta, or complex and wholegrain. A food’s fibre content will also play a huge role. Fibre is a type of carb, and works to slow the release of sugar into the bloodstream.

Dr Yeo says: ‘It’s largely protein and fibre that make our bodies work harder. The side effect of eating these foods is that you’ll end up consuming fewer calories, which is great if you want to lose weight. And if your body is working harder to digest something, it’s a good marker that what you’re eating is good-quality food. It’ll be better for you and contain more nutrients.’

What complicates matters further is that each of us has our own metabolic rate, which can also influence how quickly or slowly we process calories. Registered dietitian Clare Thornton-Wood, spokesperson for the British Dietetic Association, says: ‘The calorie labels on packaging are just a guide because how many calories we use depends on our body size, age, how much muscle mass we have and our lifestyles. I might use 500 calories less in a day when I’m just sitting at my computer and not moving around. We should take these things into account – as well as what we’re eating. It’s absolutely true that not all calories are equal.’

Dr Yeo explains that the big problem in modern life is that we’re ‘eating too much food in which our bodies don’t have to work hard to extract the calories’. He is talking about ultra-processed food, which has gone through a mechanical or engineered process.

Approximately 50 to 60 per cent of all calories we consume in the UK come from such foods. And it could be catastrophic for our health. These foods – most commonly items such as pizzas, sausages, bacon, reconstituted meat and ready meals – are higher in salt, sugar and fat to make them taste good. And because they’re lower in fibre and protein, the evidence shows we consume more to make up for it.

One study followed 20 healthy adults for two weeks and allowed them to eat as much or as little as they wanted. Half were given an ultra-processed diet, while the other half were given a diet of wholefoods. Both diets had roughly the same number of calories per portion. But those following the processed diet ate around 500 calories a day more, and gained on average two pounds.

There is also ample evidence that more people are obese in countries where ultra-processed foods make up a broader proportion of the diet. Even options we assume are ‘healthier’ fall under the ultra-processed bracket. ‘Vegan burgers and oat milk are marketed as healthy, but by definition they’re processed to within an inch of their lives,’ Dr Yeo adds. ‘If you think you’ll be getting as many nutrients from them as from real food, you’re fooling yourself. Often these products simply have better PR.’

Most experts agree that the way to lose weight is to reduce your calorie consumption. But rather than chasing restrictive strategies which only work in the short term because they are impossible to stick to – such as cutting out carbs or fat, or only eating meat – the key is to eat as many ‘real’ foods as possible, which will naturally be lower in caloric availability and higher in nutrients. That means wholegrains, fresh fruit and vegetables, legumes, lean meats, fish or proteins such as nuts and tofu.

‘If we can get the Government and industry to display caloric availability, rather than calorie content,’ says Dr Yeo, ‘it means people can make an informed choice – which could make a huge difference.’