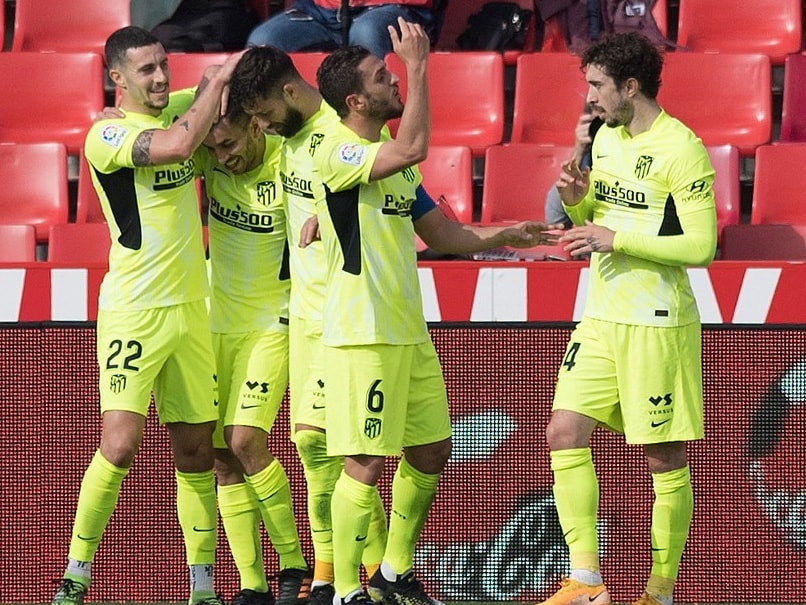 
Atletico Madrid swerved a second consecutive slip in La Liga on Saturday, by squeezing past Granada 2-1 to move eight points clear at the top of the table. After drawing at home to Celta Vigo on Monday, Diego Simeone’s side got back on track with a narrow victory at Los Carmenes, secured by Angel Correa’s fortuitous winner in the second half. There was a hint of luck in Granada’s equaliser too, Yangel Herrera’s shot deflecting off Marcos Llorente, who had himself put Atletico in front only three minutes earlier.

Barcelona, who are third and 11 points behind the leaders, face Alaves at home later on Saturday, before Real Madrid host Valencia on Sunday.

“The most important thing today was the fight and the energy of the team,” said Simeone afterwards.

At the full-time whistle, he shook his fists and sprinted down the tunnel, his relief evident at the end of a game that could easily have seen more points dropped for his side.

Granada have been one of the stories of the season, sitting eighth under Diego Lopez after being promoted two years ago, and they were far from outclassed by La Liga’s frontrunners.

Suarez had scored in six of the previous seven games but for once the 34-year-old was not the matchwinner, with Llorente and Correa – two unsung heroes this season – instead proving the difference.

Llorente’s goal was his seventh of the season, while his lay-off for Correa was his sixth assist.

“As coaches trophies are wonderful because they fill you with excitement and glory,” Simeone said of Llorente.

“But when you work with a footballer and see them grow, you feel even more joy and more enthusiasm to keep doing what you’re doing.”

Suarez went closest to giving Atletico the lead when his shot into the ground flew up and grazed the crossbar just after half-time.

A miscontrol by the Uruguayan at the back post saw another chance go begging but Llorente took over, nipping in from the right and dragging a shot with his left foot inside the near post.

It was the first of three goals in 11 minutes, as Herrera equalised shortly after.

Atletico’s Yannick Carrasco and Saul Niguez were both guilty of light challenges on Jorge Molina, who battled to shift the ball into the path of Herrera, whose finish hit Llorente and crept in.

But eight minutes later, Atletico were ahead again, the final shot taken by Correa, after more good work from Llorente. Correa weaved into space in the area, his driven effort skipping up off Jesus Vallejo and looping into the far corner.