He is Simon Henry Arthur Fitzranulph Basset, Earl Clyvedon, Duke of Hastings or, for short, and as he quickly became known in this house: ‘Hot Simon’. She is Lady Daphne Bridgerton, the beautiful daughter of a viscount who is bored by her conventional suitors but longs for marriage and children.

They meet at a ball, and banter, but he is determined never to settle down, so they come to an arrangement: they’ll pretend to be courting so that women will stop throwing themselves at him – Hot Simon is so Hot, you see – while she’ll increase her value on the marriage market.

They begin to fall in love. But so many things keep them apart!

‘I can not marry you,’ says Hot Simon. ‘You can,’ says Beautiful Daphne. ‘I can not because of the vow I made to my father and because I used to stutter! And I’m a rake!

Look at my cravat. Am I not wearing it rakishly?’ ‘But Hot Simon, I will help you overcome your demons!’ ‘For the 785th time, I cannot marry you, Daff, but I can tell you how to pleasure yourself down there.’

And that is, essentially, the plot of Netflix’s much anticipated Regency drama, Bridgerton, based on the bestselling novels by American writer Julia Quinn, and in normal circumstances one might shrug and sniffily say: Ms Quinn is no Ms Austen, is she? 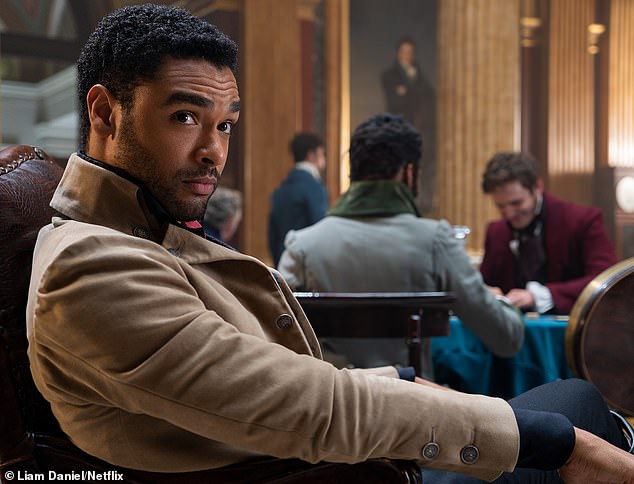 Every character is one-note, including Hot Simon (Regé-Jean Page, above), an emotionally unavailable brooder with a backstory that might have been bought from backstories.com

And: what is this soapy Mills & Boon froth? And: can Hot Simon do anything other than smoulder? But with our Christmases in tatters and nowhere to go, it did prove quite seductive.

I did want to know what happened next, even if it was so predictable the fact is: I already knew.

This eight-parter cost an absolute bomb, and it’s certainly delicious on the eye. The frocks, the jewels, the (obviously fake) floristry! But it wasn’t just the floristry. Nothing seemed that real.

Was it meant to seem real? Hard to know how seriously this took itself. It had its promised ‘modern twists’, which included colour-blind casting, which is excellent as it annoys people (especially white ones who still want to hang on to everything and have no imagination), and a gay scene and Beautiful Daphne learning about herself down there and so much (orgasmic) sex in episode six, The Rutting Episode, I rather longed to be a newly married duchess myself.

Am I too old? Will I never do it on library steps?

This hit all the beats for a soapy period romp, with subplots aplenty and misunderstandings and eavesdroppings and intercepted letters and social climbers and hidden debts, and so many balls that I ended up with ball fatigue.

(Balls of the dancing kind, that is. Now I’ve made it worse. Balls where you dance, I should have said.) The cast do their best with the material and there are some excellent names, with Ruth Gemmell playing Daphne’s mother and Polly Walker as scheming Lady Featherington, with her own three daughters to marry off.

But every character is one-note, including Hot Simon (Regé-Jean Page), an emotionally unavailable brooder with a backstory that might have been bought from backstories.com, so perfunctory did it seem, and Beautiful Daphne (Phoebe Dynevor), who was also given to moping.

When one wasn’t moping, the other was. I was absolutely longing to knock their heads together.

This wasn’t exactly told at a lick, with many a redundant scene – why did characters have to constantly repeat what we already knew?; why did Eloise, the proto-feminist, keep saying the same thing over and over? – but it still had its entertaining moments.

In particular, I was entertained when it tried to recover from its own plot holes. (‘Can you remind me, my lord, why we can not send Marina back to the country?’). Here the surface froth was not deceptive, as it would be with an Austen, but it did kill time on Christmas Day when nobody came for lunch because they couldn’t.

So I’ll always be grateful for that.

Due to the constraints of space I can’t dally over the festive special of All Creatures Great And Small but can tell you it was lovely. (Spoiler alert: Suzie the collie had trouble delivering puppies but they were all fine!*) 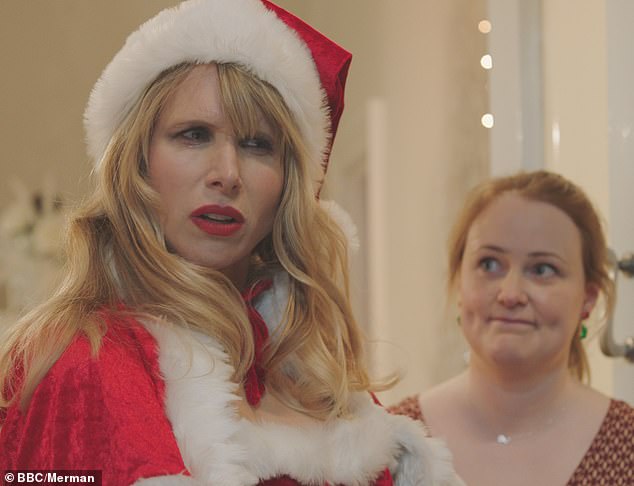 I can only find the crispy ones you use for the dogs. It’s like drying myself on a Weetabix’ – and the demands of her husband, who keeps desperately calling from T. K. Maxx.

‘Do you want an Antony Worrall Thompson salt pig? A Michael Kors clutch? A massive suitcase?’

I laughed and laughed and laughed, probably because this did have the ring of truth about it, and reminded me of the year my partner bought me a wallpaper stripping machine because ‘B&Q was the only shop still open on my way home’.

Is it any wonder I dream of Hot Simon and those library steps? Is it?