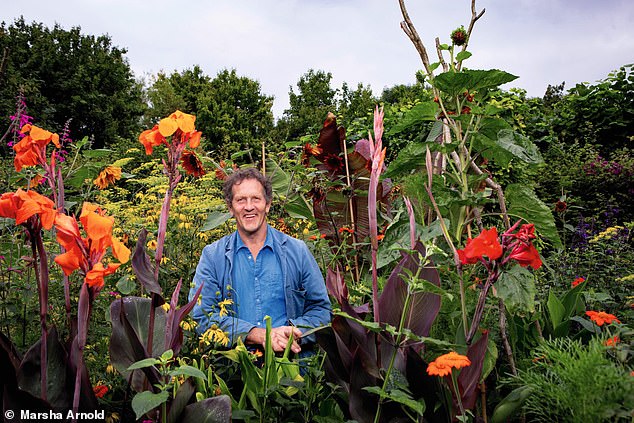 Monty revisits one of his classic books, Gardening at Longmeadow, in an occasional series.

The last weeks of August are ‘the end of the affair’. For many of us it’s all to do with school and the end of the holidays. September brings a new school year and everything changes.

Though the garden does not know dates or terms, it has its seasons and rhythms too, and it is essential to acknowledge these and work with them. The final days of August are part of a distinct horticultural season and it is one of the best of them all, not least because it is shot through with a sense of loss that accompanies each passing day.

Monty Don has shared his advice for growing flowers that flourish from the middle of August until October (Pictured: Monty with some of his orange cannas)

The light is the very best of the year. From the middle of August until October it has a unique quality: still bright and carrying real warmth but also falling in the sky, so there is little of the glare of high summer.

The evenings, in particular, have a golden intensity that perfectly sets off the richness of the flowers. The leaves are thinning too, so that shadows have less substance, and this beautiful light filters gently through trees, shrubs and hedges like sunlight shining through muslin curtains.

The plants that thrive in this season tend to come from the Americas – cannas, rudbeckias, heleniums, sunflowers, dahlias, inulas, cosmos and penstemons. There are, of course, wonderful exceptions to this rule, especially from South Africa, like gladioli, leonotis and crocosmia.

In August, Longmeadow, in particular the Jewel Garden, glows with rich colours – oranges, purples, burgundies, magenta, copper and gold run like threads through our borders.

For me, the key colour is orange. The sunflower ‘Russian Giant’ takes orange to the brink of brown; heleniums ‘Moerheim Beauty’ and ‘Rotgold’ hit their lovely russet stride with shuttlecock flowers, and Rudbeckia hirta complements them exactly.

Achillea ‘Feuerland’ starts out vermilion and then fades to amber. Crocosmia ‘Lucifer’ has wonderful fiery flowers and great spears of leaf, while the more modest ‘Emily McKenzie’ is longer lasting.

Try the lesser-known ‘James Coey’ to add another intense shade of orange. 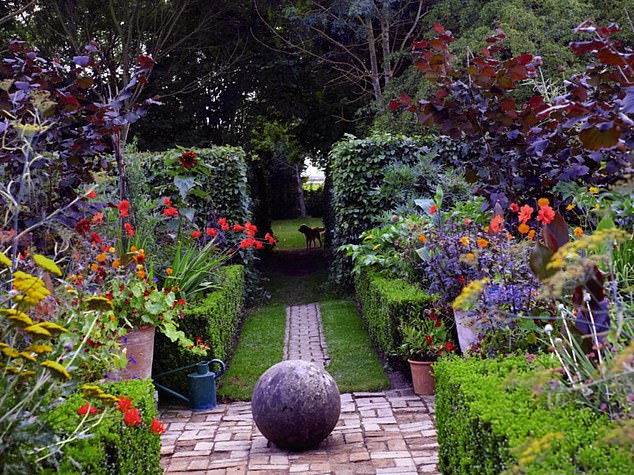 Monty said cannas like their soil to be as rich as possible and will repay that nourishment with a display of huge leaves and brilliantly gaudy flowers. Pictured: Monty’s garden is full of flowers that bloom in late summer

I always grow the annuals Tithonia ‘Torch’, which has sumptuously velvet petals, and Leonotis leonurus, with its sprouting rosettes of flowers at intervals up stems up to 3m tall.

Nasturtium (Tropaeolum majus) can have an incredible freshness, and its orange flowers are best produced in really poor soil. Another annual very happy in poor soil is the Californian poppy (Eschscholzia californica), which has probably the most intense orange of any flower.

This is the high season for dahlias, and good orange varieties are ‘David Howard’ and the darker ‘Ellen Huston’. ‘Biddenham Sunset’ is a semi-cactus type with a sunburst of orange ranging from almost yellow at its centre to almost red in the outer petals.

How to grow giant tobacco plants

Cannas like their soil to be as rich as possible and will repay that nourishment with a display of huge leaves and brilliantly gaudy flowers.

All these plants share two characteristics. They respond to heat, not light, to flower.

And their colour can look garish under different light, but in late summer it becomes warm and velvety. To get the best of it, plant these late-season flowers so they face west and catch the evening light.

Cucumbers need warmth and wet to thrive. I sow in late April and put them on the heated bench to germinate. Pot on the seedlings to develop a good root system before putting them into their final pot, which should be at least 10 litres.

Add a generous amount of garden compost to the potting mix, to feed as well as hold plenty of moisture. If you are planting outside, dig pits and add lots of compost.

To ensure straight growth they need to hang cleanly. Train them up canes set at a 45° angle so they are unimpeded by surrounding growth.

Pick often, as this will stimulate more fruit. A large fruit can be cut in half on the vine, as the cut end will callus over and the rest can be harvested later.

Traditionally, cucumbers produced male and female flowers. If the male flowers pollinated the female ones the fruits were bitter, so the male ones had to be pinched off. Nowadays all-female varieties such as ‘Helena’ and ‘Carmen’ produce uniformly sweet offspring.