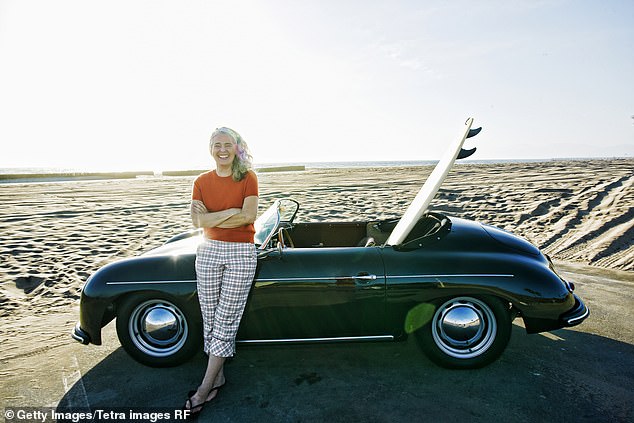 Say yes to hormones, don’t rule out fillers, but never buy chemical peels on the dark web… We have all the advice – and laughs – you really need to navigate ageing

‘I didn’t see middle age coming. Who did? It began with a series of little jolts and surface wounds, before it got into its stride.’

Around the time I turned 50, I got the feeling the universe was trying to tell me something: certain changes I’d started to notice with mild concern seemed to be taking on a life of their own.

Being the oldest person in meetings told me so, my moods told everybody else. Relationships that had been good suddenly soured and my once rock-solid marriage seemed to be cracking faster than my face.

I was hot, but not in the way I used to be: the only men who looked at me that way any more had hair coming out of their ears or were young enough to be dismissed as perverts.

I didn’t see middle age coming. Who did? It began with a series of little jolts and surface wounds, before it got into its stride. The big jolt came when I realised not so much that I wasn’t young any more, but that as far as the rest of the world was concerned, I was old. Youth was a passing phase and I’d passed it.

Striking out through the terra incognita of the menopause, I stumbled on a quest: I would search for the meaning of life after youth. Youth, after all, is fleeting, and by the time most of us notice we’ve got it, it’s gone. The rest of my life had arrived. And in a world obsessed with youth, how was I going to get over being young?

In pursuit of this question, I’d start conversations with my equally destabilised girlfriends and my three younger sisters, who were on the verge of the midlife rollercoaster. Mum, 86, and Auntie, 82, were happy to talk on the record about sex and death and their cosmetic surgeries: my mother gaily shared the details of her own sex life after 60 – a double-edged gift for me – and Auntie still wore thongs.

My observations would be wholly unscientific and probably deeply flawed, but they would be faithful to my experiences and whatever I learned along the way. Or didn’t learn. I was going to have to get comfortable in my skin, the skin that no longer fitted quite like a glove. Here’s what I’ve learnt…

Take all the Drugs

Auntie was 48 when she hit Uncle over the head with a frying pan. Uncle was a gentleman of the old school: he wrote books on cricket and wore cravats and a pinkie ring. Hearing he’d been hit on the head by Auntie with a frying pan was like hearing Lord Grantham was going to be in EastEnders. That, said Auntie, was when she knew she needed help.

The very next day she went to the doctor and was informed that she’d embarked on the perimenopause. In Auntie’s defence, perimenopause feels a bit like being hit over the head with a frying pan. It comes as a terrible shock to the system, flagging the onset of multiple undesirable losses – fertility, sleep, teeth – and multiple undesirable gains – hot flushes, night sweats and a growing feeling that you’ve left yourself somewhere, like an umbrella on a bus, except you can’t remember which bus.

Luckily, Auntie got on the HRT wagon and never looked back, and Uncle was not a man to hold a grudge.

I made an appointment to see Dr Z, who was French and had a sense of humour that had won him fans and ex-patients alike. He looked at the results of my blood tests and tutted that I needed an emergency infusion of oestrogen and progesterone. He put his elbows on the desk and laced his fingers. ‘Do you know Jen Funda?’

He made two air balloons over his jumper. ‘Barbarella?’

Ah, Jane Fonda. None the wiser as to where this was headed, I nodded.

‘Are you saying if I take hormone replacements I’ll look like Jane Fonda?’

‘Let me put it another way,’ said Dr Z. ‘When you are a young woman, your body is producing a lot of hormones to attract a mate to make babies with. The hormones keep coming until you are too old to make babies any more. After that, they start to disappear, and then, one day, they will be finished. Kaput!’ His voice dropped to a dramatic whisper. ‘And do you know why?’

I held my breath. He waggled his Biro.

‘Because your job is finished! You can die now!’

I hastily agreed to take every patch and pill Dr Z recommended and wobbled to my feet.

Show me the woman who doesn’t feel a stab of despair as her youthful looks are lowered into the ground, irrevocably, for ever.

Of all my sisters, Sister Four and I had the most in common when it came to pulling out all the try-me-buy-me beauty stops. We were the equivalent of the Bletchley Park decoders: racing against the clock, honing our methods, performing experiments with hyaluronic acid, Dead Sea serums, fat burners, pore shrinkers, collagen infusions and mood-altering oils. Sister Four made micro-blading sound like a daring new sport and gave me second-degree burns with a chemical peel she found on the dark web.

The best part of going to the gym? The muffin afterwards

54, 55, 56, tick tock… Maintaining a face was like renovating a house: you started with the kitchen, which made the other rooms look tired by comparison, but you couldn’t afford to do everything at once, and by the time you got around to the bathroom, the kitchen needed doing again.

‘I think I’ll get Botox,’ I announced to Husband while he was watching a penalty shootout. ‘You don’t need Botox,’ he said, flapping me away from the TV screen. True, nobody needed Botox, like nobody needed upper arms like Michelle Obama. But the whole point of Botox and fillers was that it was meant to look as if you hadn’t had any.

When I went to see Dr B it was impossible to tell his age; he’d had so much work he looked like a ventriloquist’s dummy. Opening his trapdoor mouth, he said, ‘Ageing is a disease and it’s my job to cure it.’

I know, I should have run, but it had taken so long to get an appointment.

Twenty minutes later I walked out looking like Dr B’s secret sister – the one the family kept locked in the basement.

Sort your lifestyle out

As middle age spread, my natural pear shape was transmogrifying into an apple shape; I began to look like a sort of papple.

Denial loves company, and Mum and Auntie were excellent companions: by some dark magic, they seemed to have managed to make their bodies listen to them. They were slim, vigorous and still had most of their marbles. As genetic role models went, they had led me down a merry path.

Still, as time went by, I couldn’t run up a flight of stairs without panting; I could just about squat at toddler eye-level to play with the grandchildren, but I’d struggle to get up again and have to do little bounces on my haunches and spread my arms out like aeroplane wings to get liftoff. Perhaps it was time to get off my denialist high horse while I still could without causing myself or the horse an injury.

I went to see my trusty GP and we struck a bargain: giving up smoking, eating and lying on the couch all at once would only set me up to fail. So we’d start with the exercise before I stopped breathing.

The best part of going to the gym was the muffin I treated myself to from the gym’s coffee shop after my workout in the sauna, because I felt I’d earned it, and calories don’t count when you’ve been sweating for 20 minutes. Three months later I’d gained two kilos and tried to get a refund on the lifetime subscription I’d foolishly taken out.

In the end, though, I hit on a solution I thought would work for me. I liked regular old walking. I joined a club and after a few months I could walk five miles without retching. I was fitter, if not much thinner thanks to the carb-loading I felt entitled to before a ‘race’. But I enjoyed it, and I kept it up. 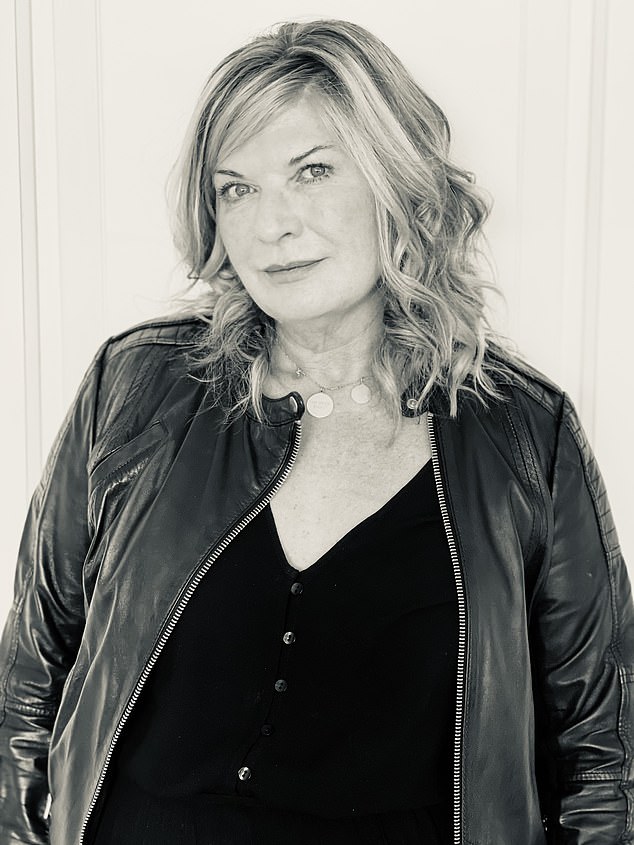 Mum and Auntie were never bored, which meant they were never boring. They were still writing their story, even if it was a short one. I learned a lot by observing them: making light of the inevitable while being mindful of its approach; ending phone calls and visits with ‘I love you’.

Auntie got three newspapers a day and did the sudoku in all of them. She volunteered at a hospice and took up art classes where she unearthed a real talent for figure drawing. But by far and away my mother’s biggest life-changing new hobby arrived in the form of a miniature poodle the same colour as her hair. What if she couldn’t cope with the physical demands of having a dog. Who would take responsibility for it in the event of..?

‘I’m not going to subside in a heap of dust just because I’m old and I will not just do what anyone tells me to do. I will be seen and heard, so hear this, daughters: I’M GETTING A DOG.’

Mum lost half a stone exercising Dog and got back into her skinny jeans. She was thrilled with her new companion, with her new waistline, with life in general.

Different Does not Mean Worse

I couldn’t be at Auntie’s surprise 80th birthday party, so I sent her a French lace thong to add to her underwear collection. The next time I saw her, I asked how she felt about being 80. Did she feel any different? Auntie looked perplexed by the question, ‘No, no different from when I turned 40 or 50. Why would I?’

I saw her point. I’ve never understood what people mean when they said they feel ‘young at heart’, as if feeling ‘old at heart’ is the only alternative. It seems to me to be just another way of saying that nothing will ever be as good again. And wouldn’t that be sad? It’s true that nothing will ever be the same again, because life is not static; it changes with us, we change with it. This is life’s gift and its pleasure. At a time when life has never been less certain, it is all the more precious. And there can be no more deferments.

The rest of my life has arrived, and I’m still in one piece, just put back together in new and interesting ways.