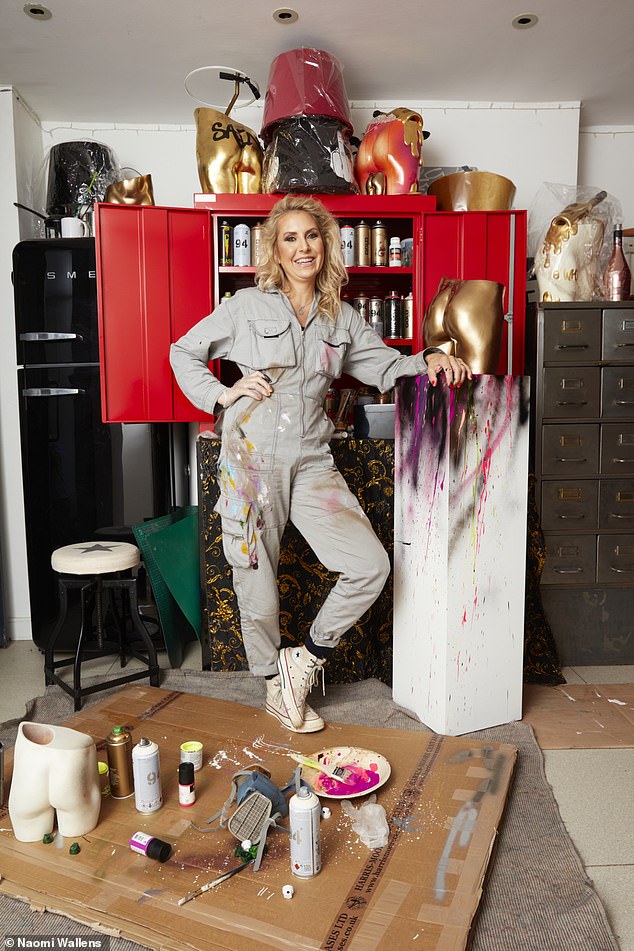 A mother-of-three reveals how she quit the corporate world to pursue a career in art.

Naomi Wallens, 44, ‘followed a “successful” path’ and worked as a product manager and category manager for toys companies when she left university before starting her own company inventing toys for girls.

However, she soon realised that the corporate world wasn’t making her happy and that she needed to make a change in her life.

Naomi, who lives in Clerkenwell, East London, ditched her corporate lifestyle to pursue art instead. 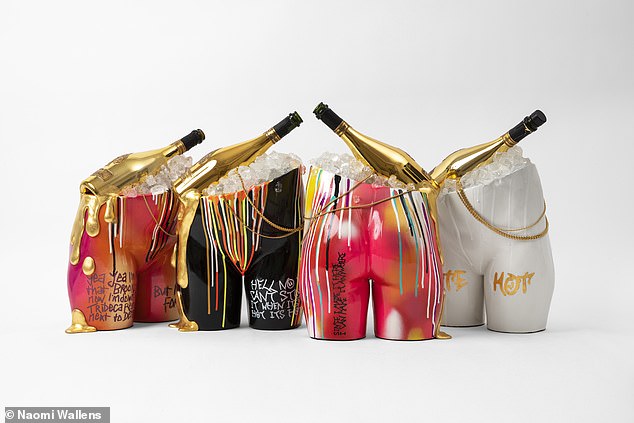 Some of Naomi’s earliest pieces of art included sculptures of her bottom that were then transformed and decorated into lamps, plant pots and even ice buckets (pictured)

Her early artwork included sculptures modeled on her bottom that championed female empowerment and challenged societal pressures on women to conform.

Describing her decision to move into art, Naomi told MailOnline: ‘I followed a pre-conditioned journey through school into university and into the corporate world to follow a “successful” path and when I got there I realised how desperately unhappy I had become.

‘Living for the weekend, living a life that was successful in the eyes of society but painful in my heart and unfulfilling and meaningless to my soul. My light started to go out.

‘I didn’t make a decision to go into art, but in the depths of my unhappiness I just started to paint again. 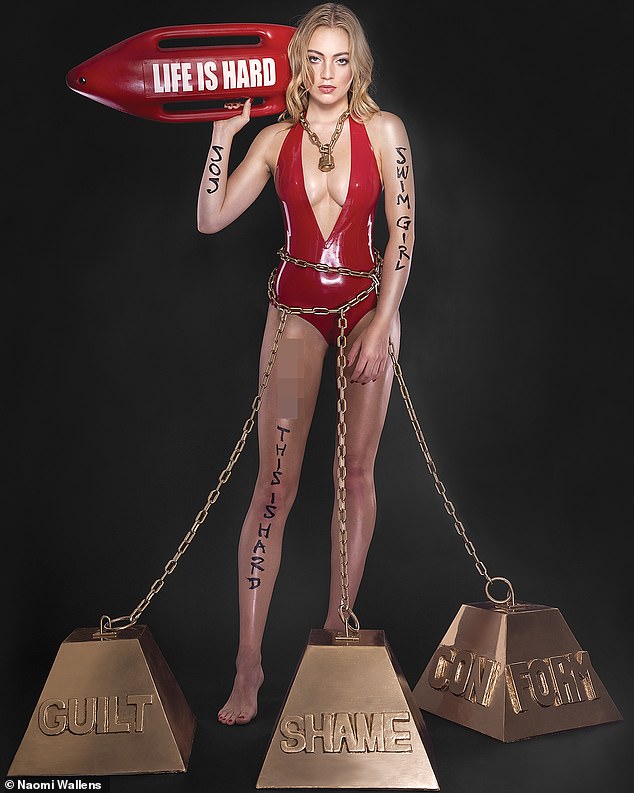 This is one of Naomi’s pieces of photographic art. Entitled ‘Save Yourself’ is one in a series of pictures created i response to the pressure Naomi felt from society to behave a certain way 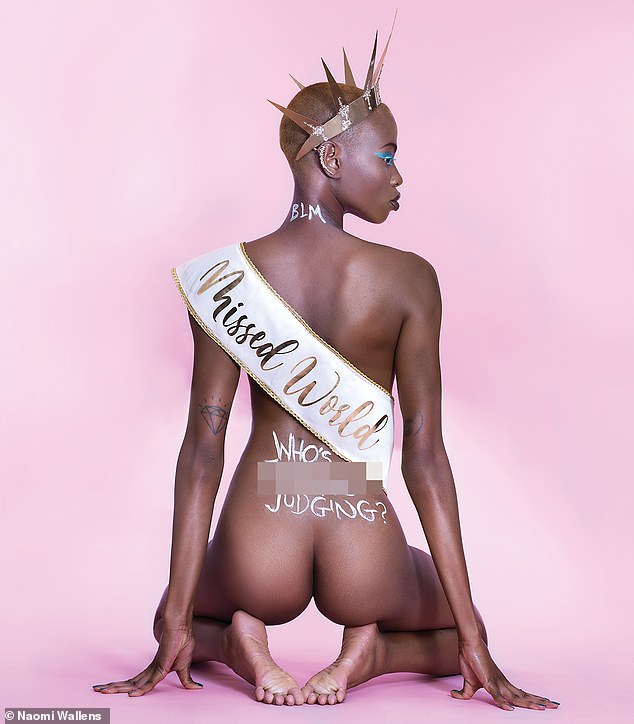 ‘Race for Beauty’ is another of Naomi’s pictures and this art raises the question whether the model winning the beauty contest has really brought her the liberty, love and happiness she sought

‘My Dad always told me this (life) isn’t a rehearsal and he is right. I still don’t know where my journey in art is leading, I just know that I feel freedom and I now appreciate each day.’

Naomi said that she draws some of her ideas from celebrities such as Miley Cyrus who inspired her photography work, and Joaquin Phoenix and Jay Z whose honesty spoke to her emotionally.

She also said that researchers and storytellers such as Glennon Doyle, Brene Brown and Chanel Miller all help channel her creativity because of how they explore human emotion and vulnerability.

‘My kids have always been and continue to be a huge source of inspiration as they are the most positive, kind and non judgmental people I have ever met,’ she said. 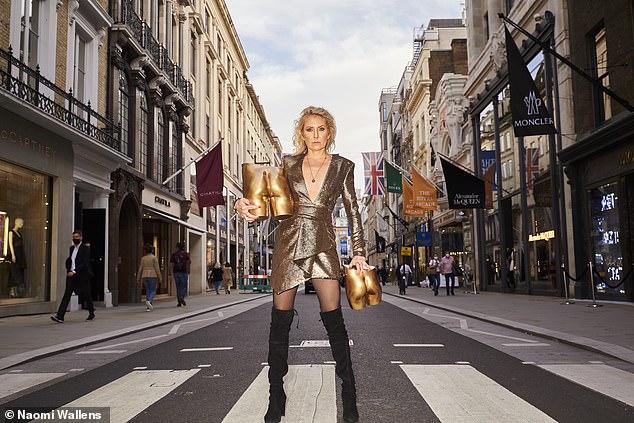 Now, Naomi has been hand-picked by the Saatchi Gallery for their START art fair which features some of the most exciting emerging contemporary artists from around the world 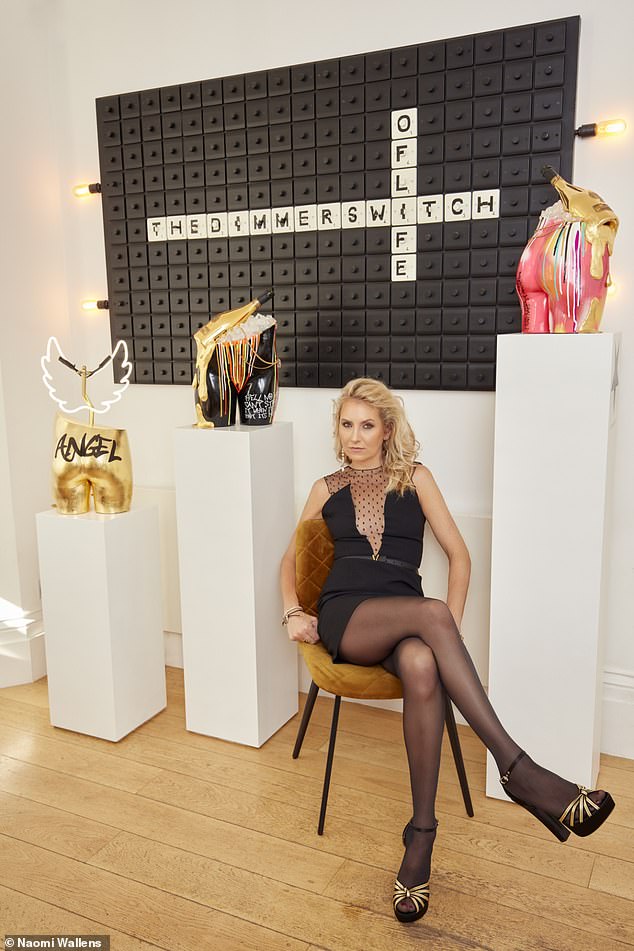 When she received the call telling her she had been selected to feature in the fair, Naomi said she ran outside and called her partner Pete and burst into tears

‘They have an unfiltered appreciation for love and life and actively encourage me to have a voice.’

Naomi also admitted that she ‘welled up’ after being approached by someone helping to set up an exhibition of her work who said that her art spoke to her.

Starting her art career, Naomi chose to create sculptures of her bottom as she felt it was her most rebellious feature.

‘In creating sculptures of my own butt became an act of both rebellion and empowerment,’ she said. 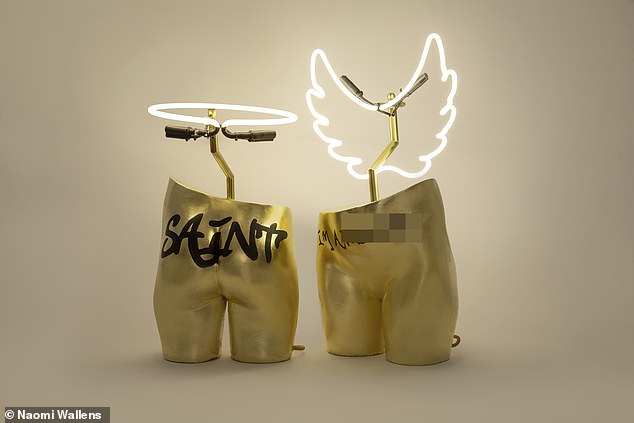 Going back to her roots, Naomi’s ‘I’m a F*****g Saint’ sculpture comes with a handcrafted halo. The entire piece is covered in gold leaf to add a sense of luxury

I didn’t really think about it, it just happened naturally and without even thinking that in my act of rebellion I needed to make a cast of my own butt.

‘I have plans for my next series for whole body part sculptures and I’m really excited in how they will look and the messages that I can tell through them.’

Now, the Saatchi Gallery has hand-picked Naomi to feature at the START art fair for the most exciting emerging contemporary artists from around the world.

Naomi, who has three children, Lottie, 14, Frankie, 13, and Wolfie, 1, says being selected feels like a dream.

She described having to work through the night to complete her pieces to try and make the impossible a reality.

‘So to see the work hung for the first time I ran outside and phoned Pete and burst into tears as I couldn’t believe it and how proud I was of what I had managed to create against all odds.’

The START art fair will run from October 21-25 and Naomi will be paying homage to inner rebel by showcasing a series of photographic art pieces as well as her new ‘Hot Ass’ range of sculptures.