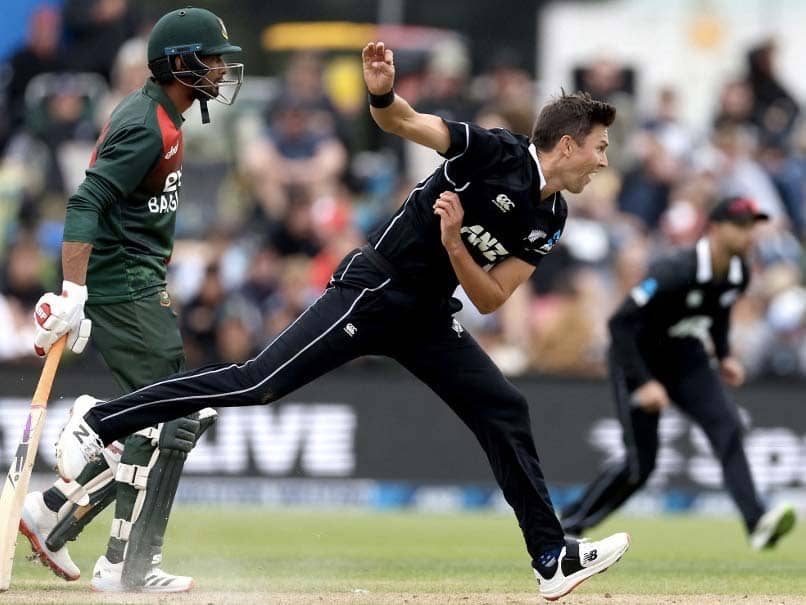 NZ vs BAN: Trent Boult bowls a delivery during the 1st ODI vs Bangladesh, at the University Oval.© AFP


Seamer Trent Boult, who laid the foundation for New Zealand’s win with his four wickets in the first ODI against Bangladesh, donated 500 dollars to his hometown club Otumoetai Cadets on Saturday. Boult took four as New Zealand thrashed Bangladesh by eight wickets in the opening game. The Kiwis took just 21.2 overs to seal the game after the hosts’ bowlers ran riot to bundle Bangladesh out for 131 in the first ODI. Boult claimed the Player of the Match honours after bowling figures of 4/27 in the opening game and donated his award money to his home club.

“Trent Boult is the @ANZ_NZ Player of the Match with his 4-27! Boult donated his $500 club donation care of ANZ to his home club Otumoetai Cadets #NZvBAN” the BLACKCAPS tweeted.

Chasing a paltry score of 132, Martin Guptill and Henry Nicholls stitched a 54-run stand for the first wicket within six overs to dismantle Bangladesh’s bowling. Taskin Ahmed provided the visitors with the first breakthrough when he removed Guptill.

But Nicholls and Devon Conway brought up a partnership of 65 as New Zealand reached triple figures. But just at the cusp of the win, Hasan Mahmud ended Conway’s sluggish knock.

However, New Zealand had plenty of overs to get over the line and the hosts sealed the match in the 22nd over to take a 1-0 lead in the three-match series.

Put in to bat first, Bangladesh was restricted to just 131 runs off 41.5 overs on the back of an all-round bowling performance.

The visitors had got off to a bad start as they lost skipper Tamim Iqbal in the fifth over. The Bangladesh captain was off to a flying start as he smashed a six in the third ball of the match. But it was Boult who had the last laugh as he trapped him in front of stumps.

Since then Bangladesh batsmen struggled to leave a mark as New Zealand seamers kept on taking wickets at regular intervals from both ends. Only Mahmudullah and Mushfiqur Rahim managed to score past the 20-run mark.