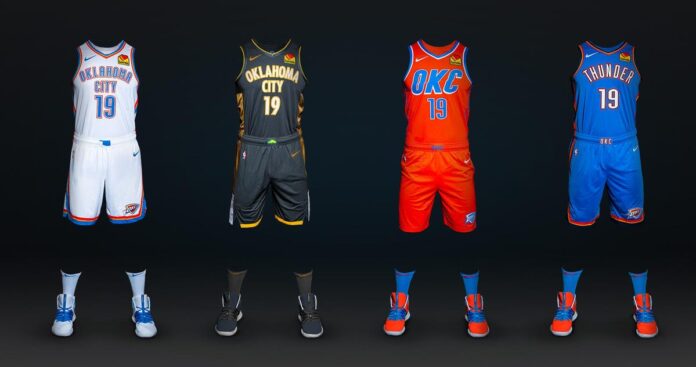 OKC unveiled four of their new uniforms for the current season back in July. The City edition jersey was recently used in the Thunder’s 113-92 win over Russell Westbrook and the Houston Rockets.

The said jersey will be used by the team many times in the current season to be seen by the Thunder’s global audience.

In memory of the 25th anniversary of the Alfred P. Murrah Federal Building bombing, and in honour of those who were killed and the survivors of the said bombing, the team has created the City edition jersey with a lot of details that represent the event.

Details on the belt buckle, jersey sides, neck, and tag of the jerseys represent the memory of the bombing. Thunder’s partnership with Oklahoma City National Memorial and Museum made it possible to bring out the jersey’s design.

The City edition jerseys made its debut in the team’s lopsided victory over the Rockets. It could not have been more timely as it was the first time in the team’s history to play against their former centrepiece in Russell Westbrook.

Westbrook was definitely honoured in his return to OKC. The team showed a two-minute video tribute to their former MVP that showed highlights of the guard’s career with the team.

Fans were cheering ‘MVP!’ in honour of him. He was the team’s first MVP since Kevin Durant left for the Golden State Warriors after the team blew a 3-1 lead in the Western Conference finals.

The newly-revamped Thunder led by as many as 30 in their game against the Rockets. The team used a flurry of three-pointers to grab an early lead as they finished the first quarter with a 37-21 lead.

Westbrook scored 34 points for the Rockets. He was the only player to reach 20 points in the team. Former Thunder sixth man and guard James Harden had an off-night after shooting 5 of his 17 attempts for just 17 points.

The Thunder had five players in double-digit scoring. Seven players shot more than 50% from the field as the team shot a strong 49.4% in the win.

They seemed to be comfortable with the City edition jerseys. Ex-Rockets star Chris Paul did a sick move as he nutmegged Isaiah Hartenstein with a between-the-legs move that split the defence as he scored with a right-hand floater to extend the team’s lead to 101-75.

Paul finished with 18 points, six rebounds, five assists to go along with four steals for an effective all-around game.

Danillo Gallinari scored 23 points and pulled down 11 points to lead the Thunder in that win. He drained three three-pointers to help the team corral the Rockets. Shai Gilgeous-Alexander chipped in 20 points, and sixth man Dennis Schroder scored 16 points off the bench.