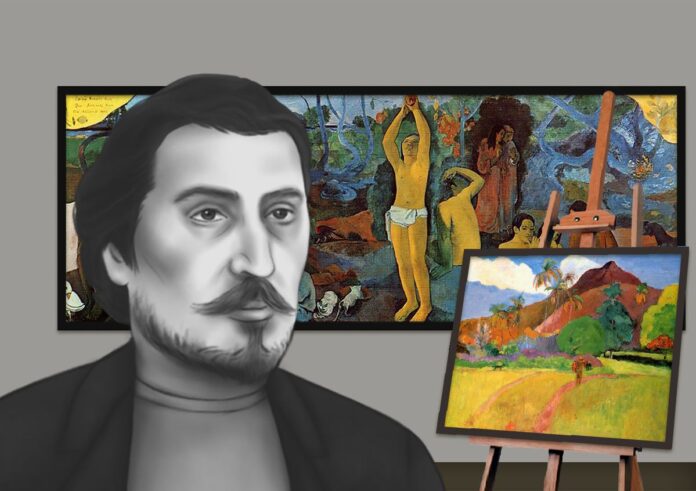 Talking about the post-impressionist era and not considering Pau Gauguin will be unfair. Gauguin was a prolific artist, quite well-known for his masterpieces related to the Synthetist style. Moreover, Gauguin was a significant influence on many contemporary artists, including the very famous Pablo Picasso and Henri Matisse.

The friendly artist shared a bond with the legend Vincent Van Gogh and his brother Theo Van Gogh. Having heard of his style, relationships, and artistic talents left us in awe of surprise. Where did he come from?

What were the roots of Paul Gauguin, and how did he manage to rise from nothing to build an extravagant art empire? To get revelations on such intriguing questions, keep reading the segment below to know more about Paul Gauguin.

The Early Life of Paul Gauguin

On 7 June 1848, Paul Gauguin was born in Paris to Aline Chazal and Clovia Gauguin. It was a year of revolutionary upheavals in entire Europe. Yet, until the age of six, painter Paul Gauguin enjoyed all the privileges of his upbringing.

From nursemaids to servants, it was a lavish lifestyle that Gauguin was brought up into. Later in 1854, his family went through unexpected circumstances. The family mentors fell from political power during the Peruvian civil conflicts.

Aline and her other children returned to France, leaving Paul with his paternal grandfather. She settled in Paris to work as a dressmaker. After spending some time with his grandfather, Gauguin returned to Paris.

Initially, French painter Paul Gauguin used analogous colors for his artworks. After that, he started creating a canvas with non-representational colors with their vitality and independent existence.

Some of his depictions are direct inspirations by Japanese prints and their bold, bright colors. However, he also loved folk art to convey the emotional purity straightforwardly on his canvas.

His illustrations were not something extraordinary. But, they had attention to detail and depicted the day-to-day instances with utmost reality. Every color and feature was pre-planned, supremely calculated, and considered to its core.

Gauguin was primarily sent to the prestigious Petit Séminaire de Chapelle Saint Mesmin. It was a catholic boarding school where he spent three years. Then, when he was fourteen, he started going to Loriol Institute in Paris.

He also signed on as a pilot’s assistant in the merchant marine, three years after which he joined the French navy. He served the French navy for two years. After returning to Paris in 1872, Gauguin stepped into his job as a stockbroker.

At 23, he became a successful Parisian businessman and continued the same for the next 11 years. As a businessman, French painter Paul Gauguin was as exceptional and breathtaking as artists. In 1879, Gauguin artist earned 30,000 francs a year, $145,000 US dollars.

But, in 1882, the stock market in Paris crashed, and the art market contracted. Soon after this, he realized that his earnings were deteriorating sharply. He then decided to switch to painting as a full-time profession.

Earlier in 1873, painting for Gauguin was just a way to spend his leisure time. He didn’t think of it as a carrier then, and his first pairings come from when he was working as a stockbroker. His close friend Emile Schuffenecker also inspired him to become an artist.

In 1881 and 1882, painter Paul Gauguin exhibited many of his artworks at impressionist exhibitions. Although, these did not gain that much attention and received mixed reviews.

One of the early paintings done by him, The Market Gardens of Vaugirard, was not praised during that time. But, it is now regarded as one of the most influential works of the master. After the stock market crashed and Gauguin began to work as a full-time artist, he asked Picasso for help.

In the first place, things went smoothly, and Gauguin decided to move to Rouen with his family and, after that, to Copenhagen. But unfortunately, both these decisions didn’t work well for Gauguin. Things became difficult on the financial forefront as well as the marriage also faced some bumps in the road.

An Artist with Numerous Artistic Style

Gauguin as an artist, was not just restricted to paper and colors. He was a person full of experimentation and curiosity. His class apart approach to trying different artistic styles made him an artist one of a kind. His works evolved from Japanese prints to Cloisonnism.

The Yellow Christ (1889) by Paul Gauguin is cited as the quintessential cloisonne work with flat areas of colors and bold brush outlines. But, apart from it, his woodcuts were no less innovative. To gain utmost perfection, he, instead of incising his blocks with the intent of making a detailed illustration, opted for chiseling his blocks like wood sculptures.

He used his finest tools to create detail and tonality within his bold contours to give it all an over-the-top look. He also used elaborate formal decoration in his paintings to amplify patterns in his abstractions. All of this harmonizes the union of man and nature in the most real essence of visuals.

Learn about Gauguin artist in detail to know his depth and conviction towards his work. You can also check painter Paul Gauguin’s beautiful paintings and artworks online to admire his prolific work.