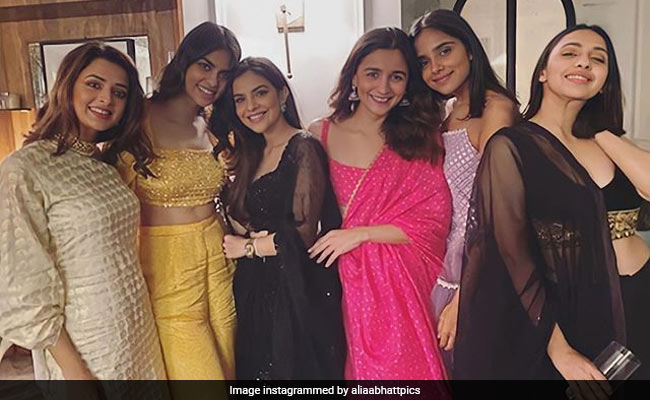 Alia Bhatt let her hair down at a party with her friends on Diwali eve and shared just a glimpses of it on her Instagram story. “My girls,” she captioned the group photo comprising herself, her bestie Akansha Ranjan Kapoor and other friends. The 27-year-old actress stood out in a pink pop lehenga, styled with traditional jewellery while Akansha Ranjan Kapoor opted for an all-black outfit. Alia’s friends Meghna Goyal and Kripa Mehta shared more glimpse from the party, in one of which Alia can be seen sandwiched between her friends as she takes a selfie. The photos have been shared on Instagran by fan-clubs.

Alia’s Diwali-special pink lehenga is a wardrobe must-have for this festive season.

Busy star Alia Bhatt is spotted hanging out with her friends on special occasions. She also often steps out in chic outfits from her friend Meghna Goyal’s label Summer Somewhere. Glimpses of Alia Bhatt busy clicking her bestie Akansha Ranjan Kapoor on her birthday did the rounds on the Internet earlier this year. Photos of Alia Bhatt as a pretty bridesmaid at Arpita Mehta’s wedding went crazy viral in 2018.

In terms of work, Alia Bhatt is looking forward to the release of the first of Ayan Mukerji’s epic trilogy Brahmastra next year. In the film, Alia co-stars with actor Ranbir Kapoor, who she is dating. Alia also has two more films in her line-up – SS Rajamouli’s RRR and Sanjay Leela Bhansali’s Gangubai Kathiawadi, which is based on the life of Mumbai’s mafia boss Gangubai Kathiawadi, who was a sex worker and eventually became an underworld don in Mumbai. In RRR, Alia features alongside an ensemble cast comprising Jr NTR and Ram Charan.