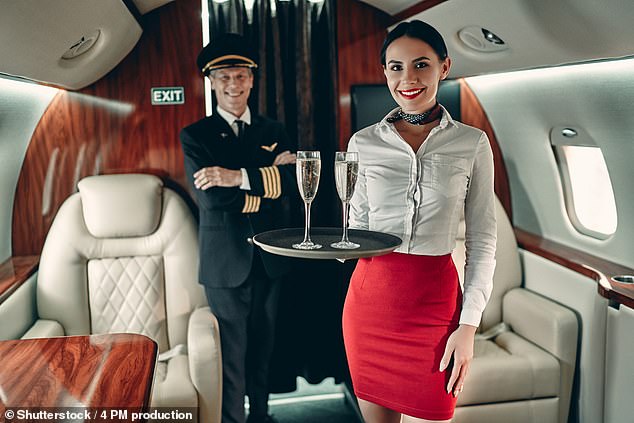 A private jet flight attendant has shared stories of the sex, intrigue and scandal that takes place thousands of miles up in the air in a sensational new memoir.

Using the pen name Saskia Swann, 45, to protect her identity and career, the flight attendant explained she spent six years working ‘for peanuts’ for one of the world’s leading airlines before a chance meeting in a London bar led to a job on board a luxury private jet.

In Above And Beyond: Secrets Of A Private Flight Attendant, co-written with Nicola Stow, Saskia details how she was thrust into the glittering world of oligarchs and billionaires where the hostesses wear Prada and the mile-high shenanigans not only take place in luxury cabins, but in the cockpit itself.

From a boss who ‘expected a little bit more from his flight attendants’ to having to hide evidence of mistresses on board, she has offered a very revealing insight into life behind the scenes of a private jet’s cabin crew…

A former ‘trolley dolly’ turned private flight attendant has revealed the truth behind what really goes on thousands of miles in the air in new memoir Above And Beyond: Secrets Of A Private Flight Attendant by Saskia Swann and Nicola Stow. Pictured, stock image

THE RUSSIAN BILLIONAIRE WHO EXPECTED SEX

Saskia signed eight confidentiality agreements before being offered her first job working for a Russian billionaire, which came with an impressive £40,000 annual salary.

Stepping into the world of glitz and glam, the former ‘trolley dolly’ began living the high life, travelling the world in luxury, with designer outfits, five-star hotel stays and a daily £80 allowance. However, the job wasn’t without its downsides.

While Saskia was informed she would be travelling alongside her boss’s wife Irina* and their two children, it wasn’t long before she uncovered the dirty little secret he was hiding.

On one occasion, Saskia accompanied the family from Istanbul to LA, but no sooner had Pavel* waved goodbye to his wife, than she was forced to get rid of all evidence of her presence.

‘Attendants had trotted off a whole list of jet owners who were known to be ‘dodgy’, from those who expected sexual favours to those who demanded their staff undergo cosmetic surgery: nips, tucks, Botox, boob enlargements or reductions, etc.’

Saskia, who said she’d never have accepted the job on Pavel’s jet if she was aware of the ‘extras’ she was ‘expected to perform’ also told of an ongoing situation in Jeddah with a ‘dodgy Saudi prince.’

She explained: ‘He has a couple of jets and, when in Jeddah, he keeps his attendants in the ‘palace’.

‘Apparently 211 they’re paid handsomely to provide sexual favours to him and other members of the royal family. He makes the girls take AIDS tests every month, apparently.’

Manically ditching everything from her toiletry bags and shoes to books and combs, moments later she was tasked with welcoming his model mistress Savannah* on board.

Saskia was told: ‘There must not be one of Irina’s hairs in sight anywhere on this aircraft. Savannah’s blonde. If she spots one brunette hair she’ll suspect Pavel’s cheating on her. Yeah, one f*** up and we’ll all be sacked.’

After Savannah and Pavel pair spent a ‘couple of hours cavorting’ on the sofa, Saskia told how Savannah, who revealed the pair had been together for three years and two months, began to ask why he wouldn’t marry her.

She went on to say how he’d whisked her off to places all over the world – including Paris, Hong Kong, Sydney, Hollywood – yet any mention of taking her to his home city of Moscow to meet his parents and he starts to make excuses.

Scared to say anything in case she got the sack, Saskia did her best to change the direction of conversation.

Soon, Saskia was informed that Pavel was a ‘known womaniser’ who ‘expects a little bit more from his flight attendants,’ too.

She recalled how her time came on a trip to New York and just like she’d been warned by colleagues, she received a text at 5pm.

Having been warned that if she didn’t sleep with Pavel she may as well consider herself fired because it’s ‘part of the job,’ and in £20,000 debt, Saskia, who staying in a $1,500-a-night room at the time, accepted her boss’s invitation to dinner – but not before breaking down in tears.

After being delivered a box containing a bandage dress and diamond necklace, Saskia found herself in a Mercedes and on her way to upmarket restaurant Eleven Madison Park.

Following a pricey, high-end meal, Pavel hopped into a private elevator and whisked Saskia up to his penthouse suite, which was adorned with chandeliers, luxurious glass balconies and lacquered walls. 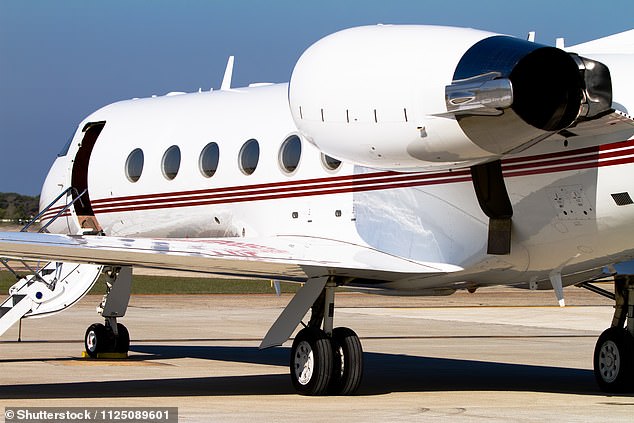 After dining on further caviar, oysters and lobster and getting drunk on chilled bottles of Dom Pérignon, Saskia recalled how one thing led to another.

‘Our dancing ended in sex, on the luscious carpet among scraps of food,’ she said. ‘Interminable missionary sex. I’m sure Pavel had taken Viagra…I closed my eyes and let him continue.

Catching the boss in a VERY compromising position with a singer

Saskia once had the displeasure of catching her ‘billionaire’ boss Tyler in quite the compromising position with Flavia*, a singer, who was no longer wearing the ball gown and dazzling diamonds she had entered the plane wearing.

Recalling the moment she debated telling her to ‘keep the noise down a little,’ Saskia explained: ‘The first thing I saw was Tyler’s feet: square toes splayed, poking out beneath the duvet.’

‘I couldn’t see his face – because Flavia’s bare back was blocking my view. She was kneeling astride him, screwing her hips and groaning.’

‘And so I determined, in the few seconds it took me to relocate the button and close the door, that now was not the moment to ask: ‘Would you care for the full English, eggs benedict or seasonal fruit platter?’

‘Prostitute. W***e. S***. Hooker. Trollop. Tramp. The words appeared on flashcards in my mind when I woke up, naked, hungover and alone in Pavel’s bed.’

She went on to say that despite spending the night in one of the most extravagant hotel suites to ever have been built, she felt ‘oh so cheap.’

Despite this, Saskia, who ‘felt guilty’ when she had to cater for the Russian in front of his wife, revealed that her huge debt and fear of losing her job meant that the one night of sex quickly turned into an affair.

‘So my routine continued, with its five o’clock calls and sex in the company of chandeliers, fine wines and the works of Monet, Picasso, Matisse,’ she added.

A SAUDI PRINCE WHO BEDDED HIS MISTRESS IN THE AIR

Saskia was told: ‘Just a few white rose petals on the pillow for the princess. Always red petals for the other woman though – bloody truckloads of the things.’

Recalling the time she caught the Saudi prince and his mistress Sabeen* having sex, she said: ‘There were lumps and bumps moving beneath the cashmere blanket, clothes discarded on the floor, and what looked to be a thong the colour of raw squid coiled on the table next to the canapés.

‘Fortunately they were in missionary position and facing the rear of the plane, so they didn’t see me.’

Saskia was told that working for Hussein was on a ‘safe jet,’ which she came to learn meant the plane’s owner didn’t expect his flight attendants to ‘put out.’

BEING FITTED FOR A DESIGNER WARDROBE AT HARRODS

Saskia, who was at one point in considerable debt but now lives debt free, was blown away when she was handed a designer wardrobe for her first job on board a private jet.

She said: ‘This was a whole new wardrobe – a very expensive one, too, complete with shoes, boots, luggage and accessories. The line-up went something like this: sexy black secretary-style suit comprising a pencil skirt and jacket, nipped and tucked and ending mid-hip; tailored black trousers; a classic fitted black dress; virgin wool charcoal pea coat with fur trim detail; four cream blouses – sheer, but not completely see-through; a cardigan; Hermès silk neck scarves; couple of skinny leather belts – both Prada; a handbag, also Prada; footwear by Salvatore Ferragamo – a pair of heels and knee-high boots for on the ground, and two pairs of ballet pumps to wear in the air. And finally, I was presented with my luggage: a cabin case on wheels and a bigger suitcase for the hold. Both Louis Vuitton, natch. 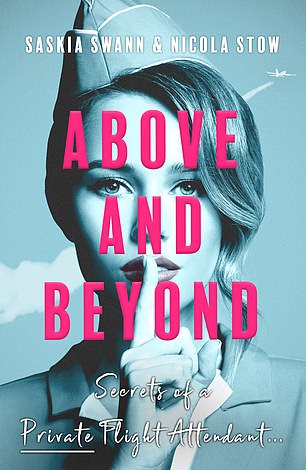 Above And Beyond: Secrets Of A Private Flight Attendant, by Saskia Swann and Nicola Stow, (Lume Books) is out on Thursday, £9.99

‘The extravagant haul, Charlotte explained, would be delivered to my home address within the next two to three days. And although I was trying to act oh so casual about this, I couldn’t help but feel overwhelmed.’

FROM SCUBA DIVING IN THE MALDIVES TO SHOPPING IN PARIS

Saskia spent some time freelancing – hopping between private jets – and loved ‘every second of it’. She told how the work took her from spa resorts to the Caribbean, Dubai to New York, African safaris to theme parks in the US.

‘The pay was pretty much the same across the board for freelancers: around $450 in wages, plus $125 in living expenses, per day,’ she explained.

‘The only financial drawback was that I no longer had a company credit card, which meant I had to sign up for another one myself.’

‘It would also be my duty to buy flowers and any other accessories for the client, as well as buying all of the food and preparing all meals on board. Expenses were later claimed back from the client.’

A BILINGUAL PARROT WITH A PENCHANT FOR POTATOES

On board one jet, Saskia and her colleague found themselves catering for Felix, a bilingual African Grey parrot, and Helena, a Siamese cat ‘who came with her own oxygen mask and child life cot, in case of an emergency’.

The cats were brought on the jet, which belonged to a German client, by a doting personal assistant named Samantha.

‘Felix had his own little perch attached to a seat, so he could reach the table for dinner,’ Saskia continued. ‘He was wearing a conical restraining collar which was clipped to a harness attached to the seatbelt.

‘Gaynor and I were trying not to laugh as Felix, dancing on his perch, kept repeating something, the only words I could decipher possibly being car, toffee and dolphin.

‘”Sorry Samantha,” I cut in, “but what is he saying?” “Kartoffel-dauphinoise. It’s German for potato dauphinoise – his favourite dish. The potato gratin from Mastro’s is fine though. You just serve it up in one of his ramekins.”

‘But Helena, explained Samantha, had a palate for turkey and ham. Both pets, she said, must remain in their seats for take-off and landing (Helena’s carrier was also attached to a seatbelt).

‘After rattling off a few more dos and don’ts and wishing us all a pleasant journey, Samantha left. And then it was just the four of us in the cabin.’

Above And Beyond: Secrets Of A Private Flight Attendant, by Saskia Swann and Nicola Stow, (Lume Books) is out on Thursday, £9.99.