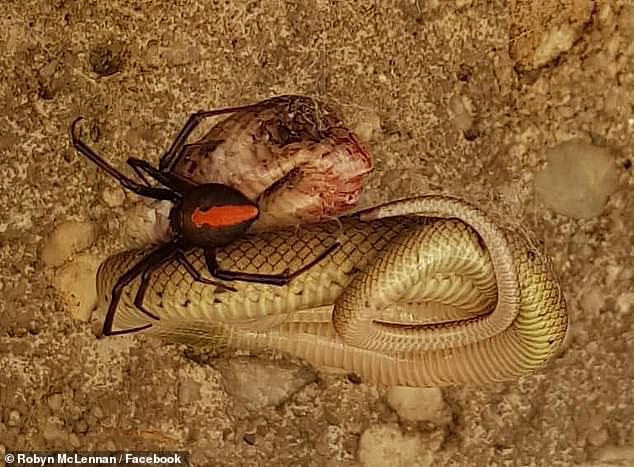 Indiana Jones might be asking, ‘Why did it have to be spiders?’ after reading a new report indicating its not uncommon for arachnids to kill and devour snakes.

Poring over scientific research, news reports and even social media, Martin Nyffeler, a spider expert at the University of Basel in Switzerland, and University of Georgia herpetologist J. Whitfield Gibbons found more than 300 instances of spiders smiting snakes.

According to their research, published in the Journal of Arachnology, it wasn’t just large, hairy tarantulas going in for the kill: First-hand accounts encompassed more than 40 spider species, including widows, and over 90 different kinds of snakes.

‘I was surprised that so many different spider groups are capable of killing and eating snakes,’ Nyffeler told National Geographic.

‘I was surprised that so many different snake species are occasionally killed by spiders.’

While reports of serpenticide came from every continent (except Antarctica), half were in North America and another 30 percent came from Australia.

And a spider family known as theridiidae, which includes the black widow, took down the most snakes.

The ones that fell prey were relatively small— usually 10 inches or under—but that’s still magnitudes larger than your typical inch-or-smaller arachnid.

In part that’s because they weave such tough webs. 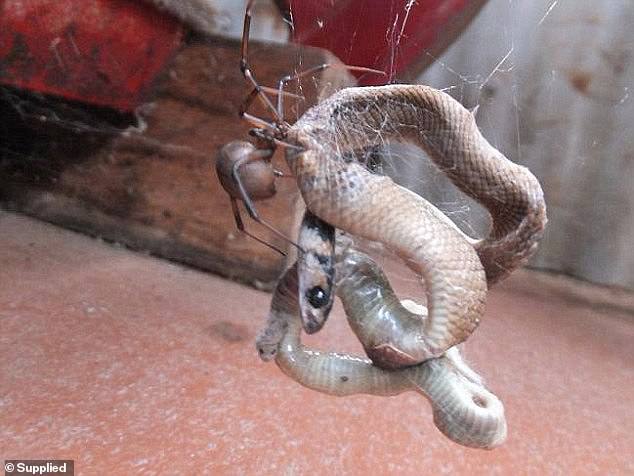 While the snakes preyed on by spiders are smaller by snake standards, usually 10 inches or under, they still tower over their arachnid foe. But the spiders, especially those in the family theridiidae, weave strong webs 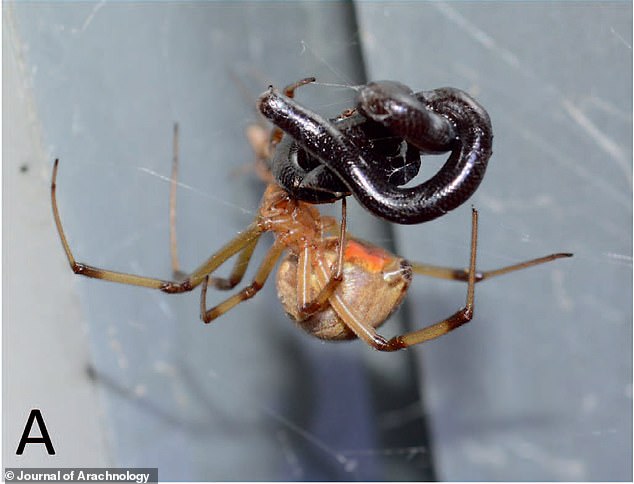 Spiders digest their food by liquifying the insides of an animal’s body, and ‘drinking’ the juices. A snake presents a super-sized meal that can last days—or even weeks

‘Even though I talk all the time about how strong spider silk is, I think I was still underestimating this incredible material,’ Arachnofiles editor Sebastian Echeverri  told Nat Geo. ‘I kind of assumed that a snake could rip their way out and get to safety. Snakes are basically all rock-hard ab muscles!’

But they slither into the arachnids’ web and get stuck.

The spider can then causally deliver a venomous bite, while the snake can’t really use its fangs on such a tiny opponent. 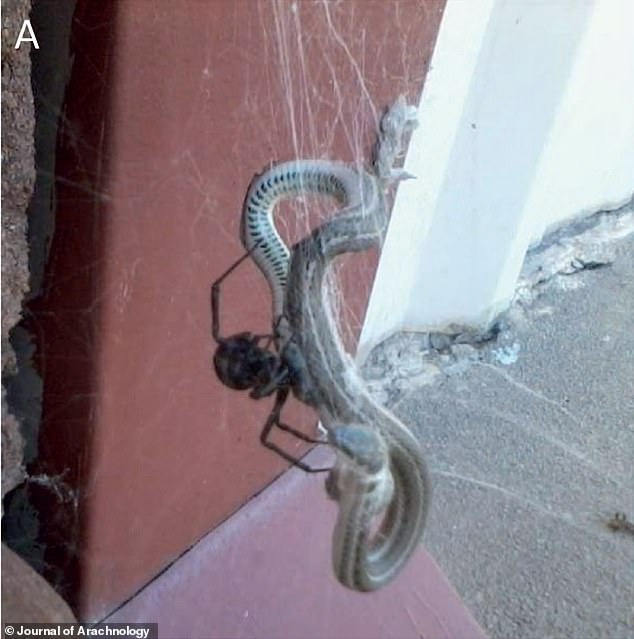 Half of all snake-on-spider attacks took place in North America. Pictured: A lined snake killed in web of black widow spider in a building in Tulsa, Oklahoma 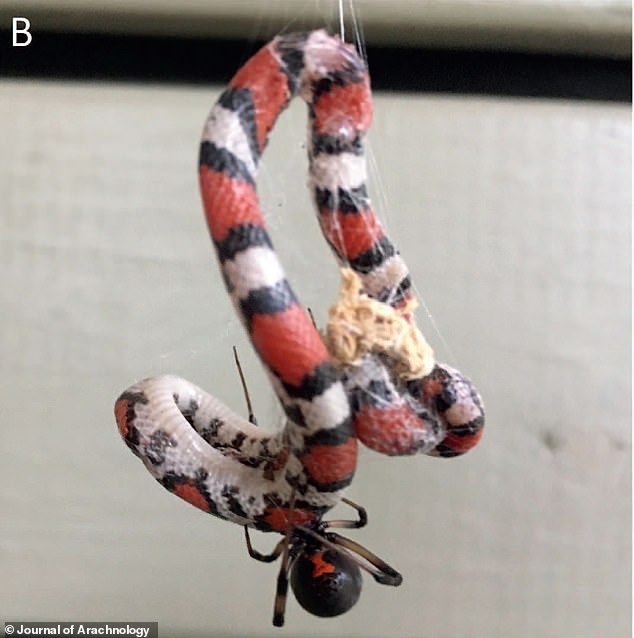 A spider can deliver a paralyzing bite to a snake, while the snake can’t really use its fangs on such a tiny opponent. Pictured: A juvenile scarlet snake trapped in the web of a brown widow (L. geometricus) in Georgia

Soon, the serpent is paralyzed and the snake goes about wrapping his meal up in silk.

Spiders digest their food by liquifying the insides of an animal’s body, and ‘drinking’ the juices, so a snake presents a super-sized meal that can last days—or even weeks.

Out of 319 spider-vs.-snake showdowns the team counted, the spider succeeded in killing the snake 87 percent of the time.

Usually if the snake survived, it was because a human stepped in to rescue it. 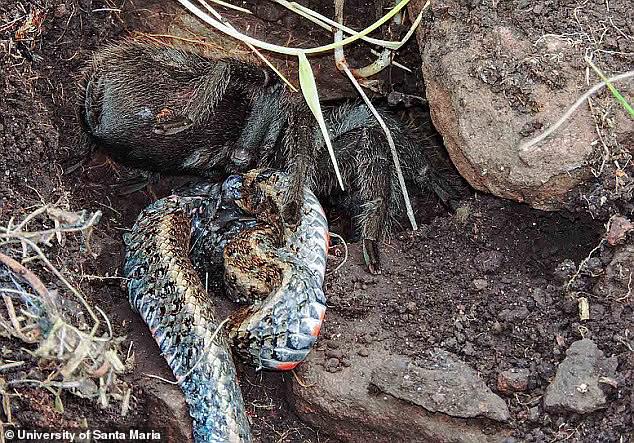 In 2017, researchers in Brazil discovered a tarantula devouring a snake under a rock in Serra do Caverál, the first time the species had been seen eating a serpent in the wild

In 2017, researchers from the Federal University of Santa Maria in Brazil discovered a tarantula devouring a snake under a rock in Serra do Caverál, the first time the species had been seen eating a serpent in the wild.

Despite being just a fraction of the size, the Grammostola tarantula had it twisted a 15-inch Almaden ground snake into a knot and was slurping on its innards.

‘Predation of such a large snake in relation to the size of the spider was extremely surprising to us,’ biodiversity researcher Leandro Malta Borges told Live Science at the time.

Grammostola tarantulas had been induced to eat snakes in captivity but this was the first time the scene was observed in the wild.

Most likely, Borges theorized, the snake slithered by the tarantula’s rock or tried to use it as a den.

When the researchers discovered the scene the tarantula already liquified the snake’s front and middle sections. 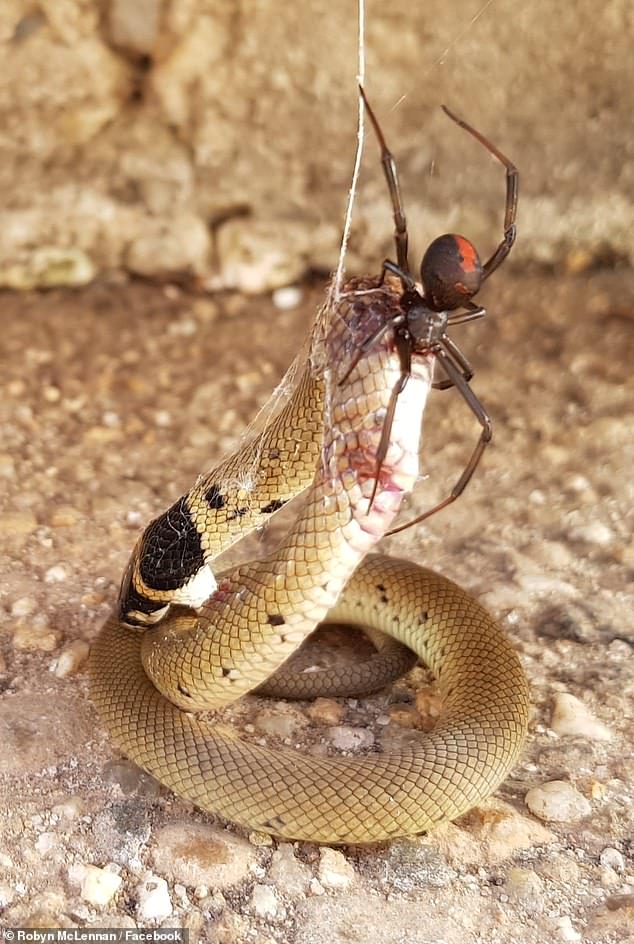 The spider can paralyze a snake with a bite, but a snake’s fangs are impractical against such a tiny foe. Pictured: A red back spider takes down a deadly Australian brown snake

A year before, in 2016, a redback spider was filmed devouring a much larger brown snake in Victoria, Australia.

Native Down Under, the brown snake is one of the most venomous in the world, causing muscle weakness, paralysis and even death in humans.

Other witnesses in Australia have attested to seeing a daddy long-legs claim a surprise victory against a brown snake, after the serpent got caught in its web.