After 18 months of the pandemic, we could all do with a little magic in our lives. But some women believe they have already found the way to achieve this — by embracing their inner fairy.

Samantha Brick spoke to five women who insist they live enchanted lives that we should all adopt.

People see me as a magical creature

Psychic and metaphysical healer Avi Esther, 39, has a son aged 15 and a daughter aged 12, and lives in the New Forest, Hampshire. She says:

Psychic and metaphysical healer Avi Esther, 39, has a son aged 15 and a daughter aged 12, and lives in the New Forest, Hampshire

I have always had an affinity with the natural world and mystical spirits — and yes, I have always known about fairies.

I was three when I began to have a collection of ‘friends’, including fairies, who stayed with me on and off through childhood. They showed me the secrets of nature, such as watching a seed on the ground respond to the right nutrients when it sprouts.

Today, I am often seen by others as a magical creature. As a woman with fairy energy, I have a way with people which helps them feel safe and comfortable.

I’m known among friends as a little fairy because I’m 4 ft 11 in. While I have a sweet, happy disposition, fairies aren’t just sweet. They are powerful.

At university, when I was 19, I was playing card games with another student and I could just sense he had pain in his right chest. He didn’t say anything and wasn’t acting strangely but I couldn’t ignore the intensity of what I could sense going on within him. Eventually, I asked if he was in pain. He said yes but laughed and said he doubted I could help.

I placed my hands on his shoulders and took some breaths while I tuned in. I then placed one hand on his back and dug the other hand under his ribs and did something that made him make a noise. Everyone at the table had their mouths open and were staring at the guy, who was feeling his chest and looking gobsmacked. The pain was gone but he was in shock and asked me how I did it. But I often don’t know ‘how’.

I wear my outfits and my crowns typically during the summer and winter solstices that mark the longest and shortest days of the year, as well as the procession of the equinoxes, which happen twice a year in March and September.

My flower crowns usually have blossom and twigs in them, and butterflies.

My children accept that this is who I am, although one day my daughter came home from school upset. She told me I’d lied to her about being a fairy queen and her being a fairy princess.

She said her friends had told her they don’t exist. I reassured her that just because they don’t believe in them, it doesn’t mean she can’t. Different perspectives on life and energy can exist together in our world.

Theatre practitioner and events co-ordinator Victoria Ruskin-Clements, 36, is married with two children and lives in Windsor, Berkshire. She says:

I always knew about the fairy realms because, thanks to my mother, our home was full of fairy lore.

Our bookshelves groaned with the works of writers and illustrators on fairies; and I was immersed in knowledge about the magical elements of this world.

My childhood meant I felt an affinity with the Earth and all nature.

As an adult, it’s really important to me to give children a magical childhood. Fairy magic and folklore tales keep them innocent and they discover that fairies offer a nicer, kinder way of being to one another, nature and the planet.

The clothes and headdresses I wear as a fairy help me get into character to spread the fairy message.

I have 85 headdresses and more than 100 costumes. I have worn them so often for my work at fairy festivals, children’s parties and in touring productions that I am now comfortable wearing them in everything I do!

As for seeing a fairy, if you really want to see one then you will — I certainly have. It’s incredible what you can find when you look hard enough. Faces and sometimes even bodies can be clear as day.

When I moved into my overgrown, run-down Georgian home three years ago, I witnessed a fairy fly out of the grass, up and away. It was pure light and just magical to see.

I’m drawn towards woods and water

Plenty of people will be sceptical but I have definitely experienced the presence of fairies, although I don’t see them in a conventional way.

While the popular image of fairies is of little beings, for me it’s a feeling I get when I’m in nature — a sensation of heightened awareness to the aliveness all around.

I see light and faces and figures in leaves and trees and water — often you can glimpse them for a moment before they disappear. It’s why I’m drawn towards woods and water.

To connect with fairies you have to almost disconnect the logical side of your brain. That’s why children find it easier to experience fairies, as they are not so inhibited.

I certainly felt drawn to fairies as a child — it was as though their spirits called to me. My grandmother is Irish and she talked to me about fairies, too.

While it isn’t something my parents are into, they are supportive.

Fairies aren’t just pretty, ethereal beings with wings. They are the guardians of nature. Our world is full of ancient magic and wisdom, if only we could learn to listen to it.

There are fairies who want to work with us to help expand our consciousness of nature for the good of the planet — and we should be listening to them.

As well as believing in fairies, I love to dress as one. Some of my outfits I make myself, others are made by artists who specialise in fairywear. I love to pop them on if I am going to fairy events. I feel as though I’m in my natural form. It’s the real me. 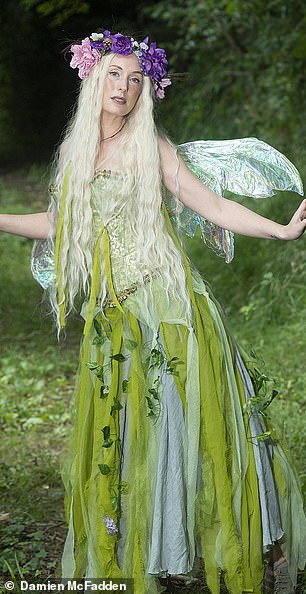 I have been aware of the ‘Fae’, which is an older word for fairy folk, my whole life.

As a little girl, I’d see fairies — or faeries as I prefer to call them — in trees and and leaves, as if they were hiding and watching whenever humans passed by.

Not all fairies look human. Some have the look of animals or plants or a mixture of these. Adults just played along but I knew I could see and feel something else there that was real to me.

Now I probably see them more in my mind’s eye — but, as an artist, I adore stepping into woodland to look for new hidden depths in nature and trees, and see figures and faces intertwined in trees, plants and rocks.

It’s normal for me to see and feel fairy energy. It is an uplifting, light energy quite unlike anything else.

I initially embraced working dressed as a fairy five years ago. Primarily it was a way of earning an income at children’s parties after my divorce. Doing the parties allowed me to work around raising my two children. It was fun to dress up, but being seen as a more commercial-looking fairy didn’t feel right as, to me, most ‘fae’ are more raw and earthy.

I realised I needed to share a deeper message with children and their parents, so I created eco-awareness storytelling workshops, artwork and a nature-connection course.

My first workshop was at a fairy festival in Cornwall, where I finally felt I was around like-minded people who also wanted to put more magic into people’s lives, while looking after our planet. It really helped build my confidence in what I do, and I’ve made some close female fairy friends in this wonderful community.

My children know I dress up as a fairy at festivals and environmental events and help me choose outfits. I don’t hide it from anyone.

I prefer to wear nature-based outfits — my green one is a floating, tattered, tangled dress. While I like to think I blend into the scenery, it also sparkles in the light.

The best way to immerse yourself in fairy energy is to be out in nature. Doing what you can to protect the natural world around you keeps fairy energy alive.

Musician and yoga teacher India Terry, 21, is in a relationship and lives in St Leonards-on-Sea, East Sussex

At festivals I only ever use eco-glitter

Musician and yoga teacher India Terry, 21, is in a relationship and lives in St Leonards-on-Sea, East Sussex. She says:

Fairies live a life of joy; we don’t take anything too seriously.

My curiosity about fairies began as a little girl. My cousin and I immersed ourselves in the fairy world — we even had secret names for one another. Mine was Rose Blossom Twinkle Toes and hers was Pebbles. At seven, we had our own secret fairy lives.

When I was 12 I tried to grow out of my love of the fairy world — but that didn’t work. I just didn’t fit in at school; I wasn’t into boy bands or reality shows. That’s probably why I didn’t have many friends.

So when I turned 15 I rekindled my love of fairies and discovered there were many others like me.

When I first wore a fairy outfit in public and spotted someone dressed the same way as me, I cried. It was a revelation to realise this could be my way of life.

There are many of us who not only believe in fairies but like to embody them in some way, often with clothing, wings and ears.

We go all-out when we meet up at festivals or fairy balls. We then keep in contact via social media. It is a welcoming group of all kinds of people. Fairies never judge.

At my 18th birthday, my home was full of people dressed as fairies. My parents love that I have found something which resonates with me.

There are many costumes for us fairies. I prefer long floaty dresses. The one responsibility which is important to us is looking after our Earth — that’s why at festivals I’ll only ever use eco-glitter. It’s made out of seaweed and doesn’t pollute the water system.

I’ve recently moved in with my fiancé. Our home is tight on space, which is why I still have two wardrobes bursting with fairy clothes at my parents’ home!

I do see and communicate with fairies. They don’t often ‘talk’ so much as leave messages through your subconscious, or through nature. You might ask the fairies a question and then see a hare jump past! Instinctively this helps me to see the answer.

I have vividly seen fairies a few times, though. On summer solstice a few years ago, I saw a procession of fairies carrying flames and a fairy carriage.

Have you got an amazing fairy story? Email [email protected]